I’ve lived most of my life within 10km of a nuclear reactor. I’ve never really given a second thought to the dangers; potential danger I should say. Besides having to sign a note for schools to give permission to administer iodine pills in case of emergency, I can say it has had zero impact. Perhaps this is one of the reasons I’ve never really concerned myself with the various arguments against nuclear power. Whether they are environmental, political, or the more fear based doomsday like opposition.

Recently I listened to an excellent podcast from TED Talks (link). I was surprised to find myself agreeing with the environmental argument that what the world really needs is more nuclear power, not less. Industry expert Michael Schellenberger, makes a good case that nuclear power is essential for governments around the world reduce carbon to meet their intended targets for carbon emission reductions. Without wading into the environmental debate, nuclear is a stable energy source that is not dependent on the weather to provide consistent power. From a carbon footprint perspective the United Nations Intergovernmental Panel on Climate Change rated it really low, actually lower than solar. During any given year, a single plant provides stable power 92% of the time. The big problem, is that people really don’t’ like it. Nuclear is and will likely always remain one of the least popular forms of energy. Popularity however, does not deem necessity.

The longer term demand growth based on plants under construction is quite clear, which bodes well for the fuel required for nuclear power. Though there are some options including reprocessing, mixed oxide fuels, and some optimistic developments regarding Thorium reactors the most popular and primary fuel for the years to come is Uranium.

Uranium
Uranium308 trades as a futures contract, don’t worry not just anyone can get physical delivery, for safety, this contract is financially settled. One contract now trades at $25/lb. In 2007 the price was over $150.  The past five years have not been kind for companies connected to the nuclear complex. 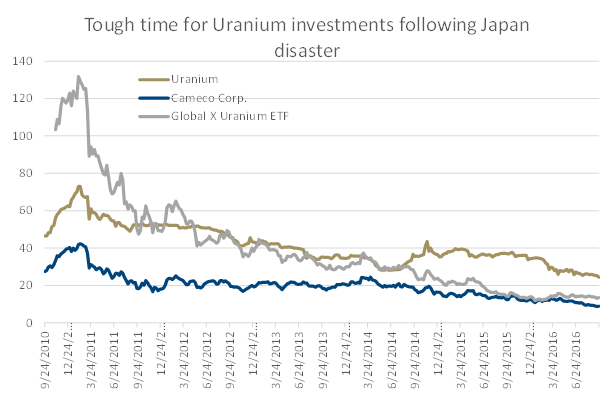 The World Nuclear Association (WNA) expects demand for uranium to increase substantially up to 2030, required substantial need for additional supplies. Unfortunately with prices and inventories (high) where they are, new exploration has been significantly reduced creating the potential for another imbalance in the opposite direction sometime in the future when the low-cost deposits are depleted. This imbalance is what caused prices to run up to $150 back in 2007. No doubt, the chart for uranium is horrible, but contrarians should note that with an RSI of 16.59, at current levels it appears to be quite oversold.

An industry in decline

The Fukishima disaster in Japan is often blamed as the major source of impact the negative move on uranium demand, but there are other factors such as Germany’s transition to renewables and away from nuclear that have impacted demand. The amount of energy produced through nuclear technologies has been on decline since 2005, the Japanese disaster just was just icing on the cake. 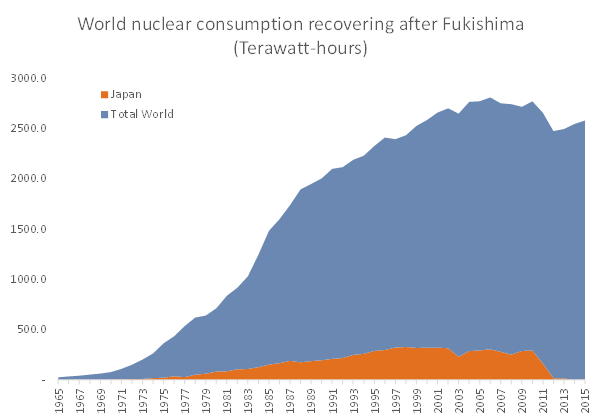 There are reasons to be optimistic however, China has many projects under construction along with Russia and India. India has said that they will open 30 new nuclear plants. That number might be high given that only 6 are now under construction. You can’t find a bullish uranium argument without hearing about China, it’s the center of activity because the demand of zero-carbon power is so huge. 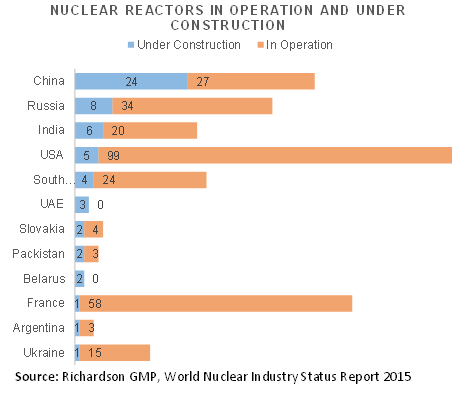 Nothing moves fast in this industry, Japan has got most of the negative attention, but in July they released a report calling for a long term plan for nuclear energy to make up 22% of energy requirements. Progress in terms of nuclear restarts has been slower than forecasted, but with their renewed focus on safety, we can appreciate that at least some progress has been made. 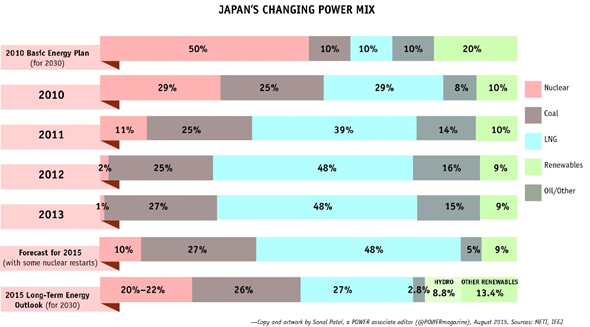 Global inventories have been rising and are currently estimated to be over one billion pounds. (source) Japanese utilities have reportedly been stockpiling about 120 million pounds of uranium. Some estimate that this enough to last five years of pre-Fukushima needs. (20 million pounds across 54 reactors) The U.S. is sitting on around 116 million pounds of U308 equivalent. This huge inventory overhang will be around for years not months, but in the future, as with all commodity markets a balance will come.

Though the point of balance may be a ways into the future, we’re focusing on the point which utilities around the world decide that now is the time to lock in the lowest uranium prices ever and begin to build their stores with cheap fuel. Why the rush? With the future growth point nearing, utilities would prefer being the first movers before prices begin their long road higher.

Bringing balance to the energy market is a painful experience. Even energy markets with relatively quick startup times still take a couple of years regain balance.  (still waiting on oil) Nuclear moves more like a cruise ship, slow steady. We’re willing to patient with this theme, and have conviction that this patience will be rewarded.

The opinions expressed in this report are the opinions of the author and readers should not assume they reflect the opinions or recommendations of Richardson GMP Limited or its affiliates. Assumptions, opinions and estimates constitute the author's judgment as of the date of this material and are subject to change without notice. We do not warrant the completeness or accuracy of this material, and it should not be relied upon as such. Before acting on any recommendation, you should consider whether it is suitable for your particular circumstances and, if necessary, seek professional advice. Past performance is not indicative of future results. The comments contained herein are general in nature and are not intended to be, nor should be construed to be, legal or tax advice to any particular individual. Accordingly, individuals should consult their own legal or tax advisors for advice with respect to the tax consequences to them, having regard to their own particular circumstances.. Richardson GMP Limited is a member of Canadian Investor Protection Fund. Richardson is a trade-mark of James Richardson & Sons, Limited. GMP is a registered trade-mark of GMP Securities L.P. Both used under license by Richardson GMP Limited