O Wage Inflation, Where Art Thou?

O Wage Inflation, Where Art Thou?

The labor markets have been improving steadily since th­e financial crisis. Some people would argue that the US is at or near full employment. Even so, there is one piece of the puzzle that is still missing…higher wage inflation.

In the following sections, we will try to determine why it is not speeding up.

At first glance, the US labor market looks unstoppable. The total number of employees is higher now than it was before the crisis: 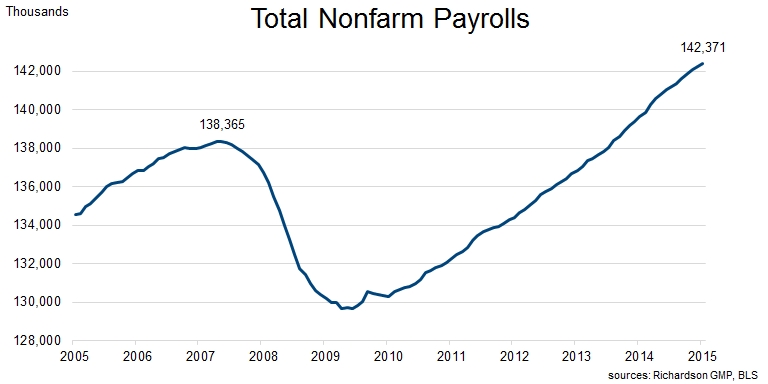 In economics, “the Phillips curve is a historical inverse relationship between rates of unemployment and corresponding rates of inflation…” In other words, falling unemployment tends to coincide with rising inflation. Intuitively that makes sense. If the demand for labour is higher than the supply then unemployment should fall and wages should rise. That said, the relationship has not held true this cycle. The following chart shows the unemployment rate (inverted) vs. the consumer price index: 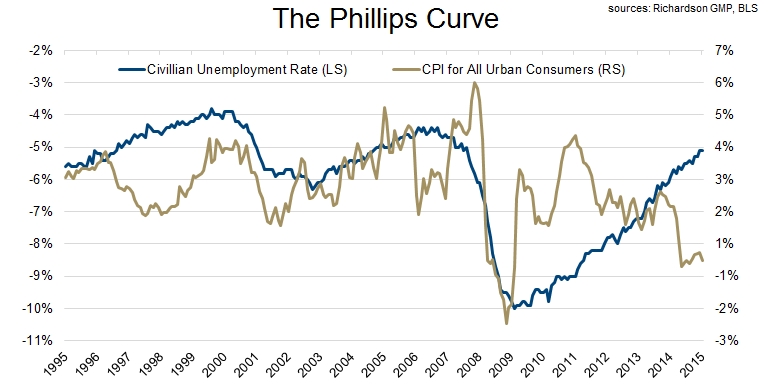 Prior to this cycle, falling unemployment was accompanied by rising inflation, and vice versa. This time around, both the UE rate and consumer price growth have been falling.

There are two reasons why the UE rate may fall. The first is that the number of unemployed persons (numerator) falls. That is good. The second is that the labour force (denominator) shrinks. That is bad. Regrettably, the unemployment rate has been falling for the wrong reason: 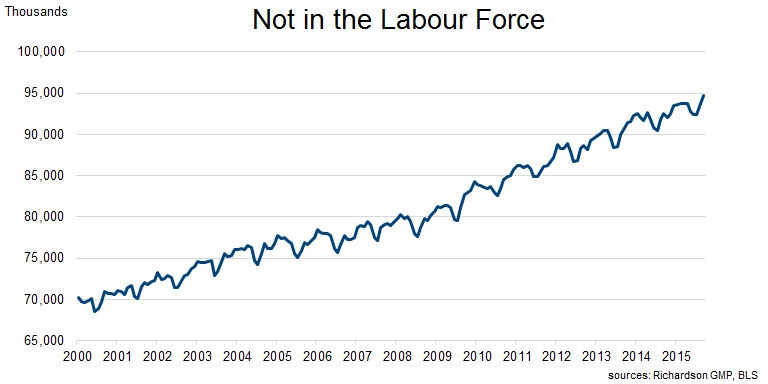 As a result, there is a growing divergence between the unemployment rate (inverted) and the employment rate, which does not consider the size of the labour force: 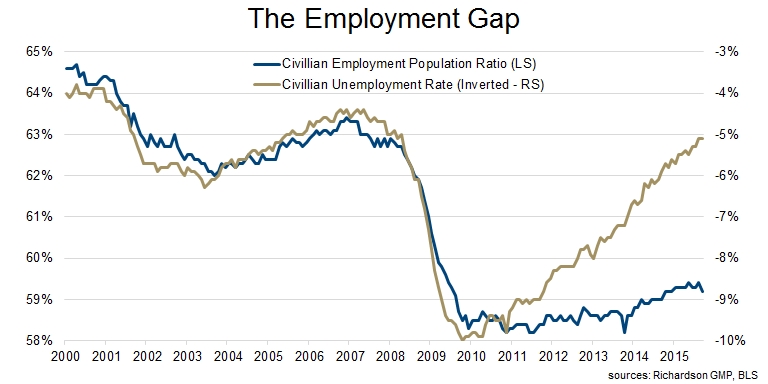 The UE rate is overstating the health of the US labour markets. That is one explanation for why the Fed has lowered its unemployment target. 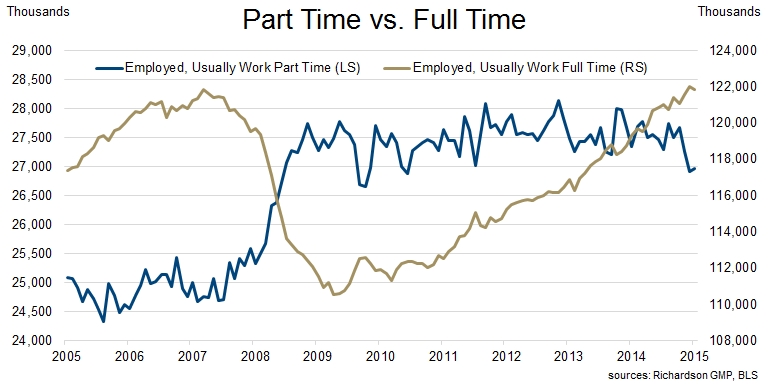 Full time employment is back to where it was before. That said, the high number of part time jobs may be putting downward pressure on wage inflation.

Along the same lines, many of the jobs that have been added are “cheap labour.” What that means is that they are not high paying jobs. The next graph shows the employment to population ratios by education level: 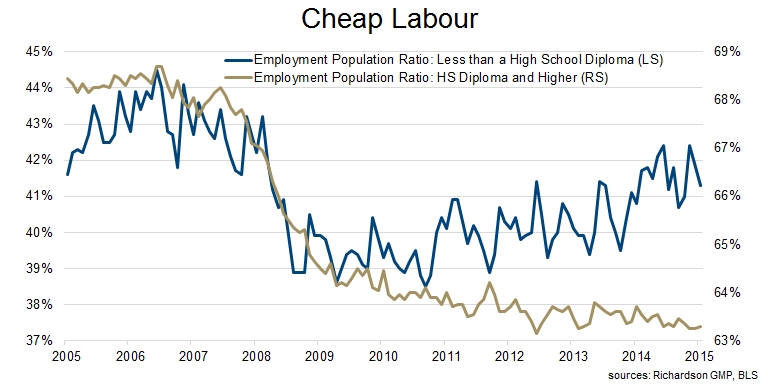 To Hire or Not To Hire

In the US, there has been a lot of talk about job openings, which are at multi-year highs. Naturally, it makes sense to assume that more openings would imply a larger demand for labour. That, in turn, would lead to higher wages. The problem is that openings do not always get filled. As we will see in the following diagram, hires are lagging behind openings: 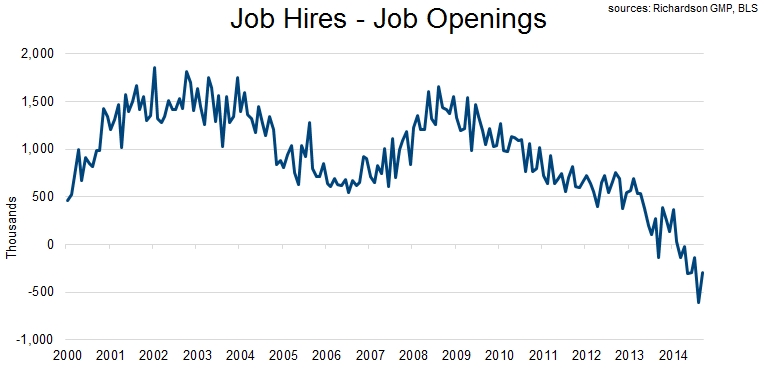 Said another way, the number of openings is rising faster than the number of hires is. Part of the cause for this trend is the mismatch between what employers want and what candidates have. In addition, employers are being extra choosy “and are intensifying their hunt for the “purple squirrel” – candidates with the perfect combination of skills, education and experience…”

Wage Growth or a Lack Thereof

After the financial crisis, wage growth rebounded quickly and then peaked at 4.37% YoY in October of 2010. Wage inflation has been relatively steady since early 2011: 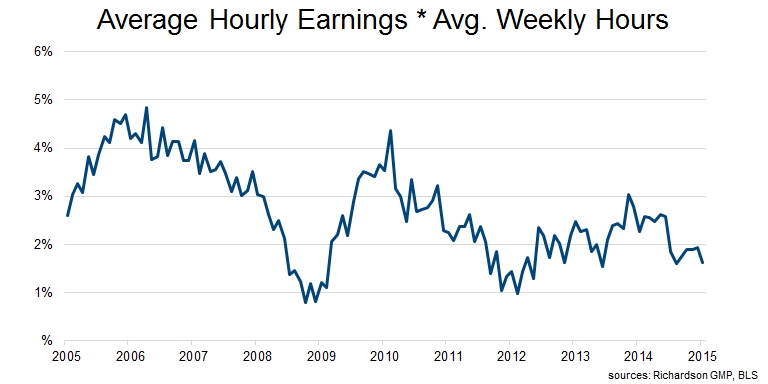 The upper bound is ~3% while the lower bound is ~1%. Currently, wage growth is the middle of that range; the last reading was 1.63%.

Not So Full Employment

Positive wage growth is a good thing. Still, it is not accelerating the way it would if we were at full employment. The US labour markets are not weak but they are not as strong as some of the headline data suggests they are.

If we look beneath the surface then it is clear that there are multiple explanations for the lack of growth in wage inflation. Many people are leaving the labour force, some of the jobs that have been added are low quality ones and openings are outpacing hires.

There is still slack in the labour markets. Maybe that is why the Fed has not moved yet.

If our analysis is right then what are the implications? Rates will stay lower for longer.