In our post earlier this week titled The Broken Dollar - part 2, we laid out our rational to lower our Canadian exposure and increase our international weight, specifically by adding the iShares MSCI Japan ETF (EWJ) to two of our investor profiles. In this post, we will expand on our Japanese thesis.

Currency matters. It matters the most for exporters, of which Japanese has no shortage. Though Japanese exports have been declining as a percentage of global exports, aggressive steps from the Government led by Prime Minister Shinzo Abe and the Bank of Japan have helped the fiscal balance sheet, pumped enormous sums of capital into their financial system as stimulous and effectively decimated the Yen. The so called ‘Abenomics’ have effectively ended two decades of economic stagnation.  CPI Inflation is also beginning to see green shoots, which may bode well for domestic consumption. 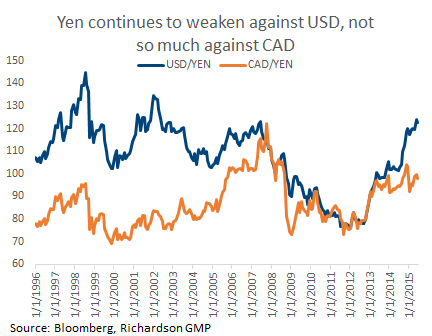 The Japanese currency has declined by over 60% against the U.S. Dollar since early 2012. Against the Loonie, the Yen has devalued since the lows in 2012 but has actually but has actually appreciated over the past couple of years. The significantly devalued Yen is helping corporate Japan. Many of Japans largest companies rely heavily on foreign revenue.  Specifically, companies who generate over 40% of sales from outside of Japan account for a 68% weighting on the Nikkei. Japanese profits are in a solid uptrend, and their profit margins are at an all-time high. 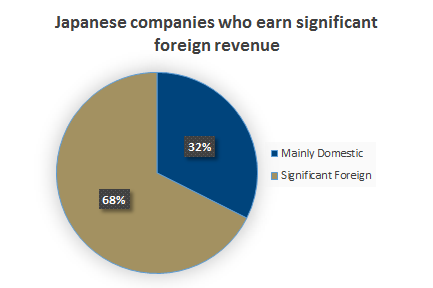 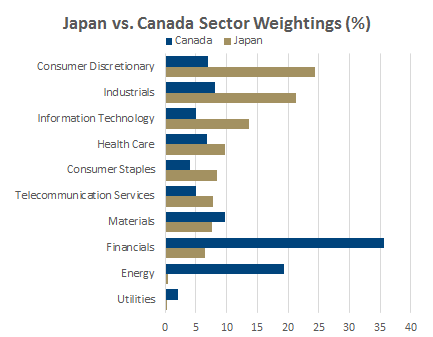 For two decades Japan has proven to be the one outlier in the ‘buy and hold’ mandate purported by most of the investment industry. Although it’s proven to be an excellent counter point to those to recommend to sit back and let time takes its course we believe that its competitiveness is on the rise, and that a tactical shift to gain exposure is warranted.