This morning we watched the Canadian dollar flirt with the $1.30 level against the U.S. dollar (or $0.77 if you prefer).  A level not seen since the flight to safety of the U.S. dollar during the financial crisis.  That means the greenback has appreciated against the Loonie by 20% over the past year or 12% since the beginning of 2015.  We have not been shy in our publications and portfolios in regards to our fondness for the U.S. dollar.  A view that dates back years.  Portfolio mandates that contain both Canadian and U.S. positions are near the maximum for U.S. exposure.  Even in our stock selection process for Canadian companies we have a strong recurring theme focusing on those that operate or generate a greater portion of profits in the U.S.  Our asset allocation investor profiles have an overweight U.S. dollar tilt.  This positive view on the U.S. dollar is predicated by a host of factors.  Relative economic growth and prospects favour the U.S.  The American consumer has delivered, rate hikes are likely coming later this year, the list goes on. 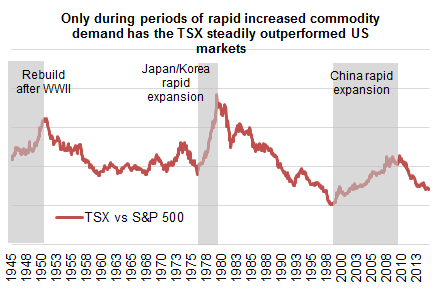 The C$ does have its moments, typically during commodity booms.  But since the last one ended in either 2008 or 2011 depending on how you measure, the next one likely won’t start for some time.  In fact, the same can be said about the Canadian equity market.   The 1st chart is a look at the TSX vs. the S&P 500.  When the line is rising, Canada is outperforming and when the line is dropping, the U.S. market is outperforming.  While there are small cycles at work in this chart, we found three major periods during the past 70 years which saw the TSX outperform.  These coincided with rapid economic growth in a major part of the global economy including the rebuild after WWII, the Japan/Korea economic boom in the 1970s and most recently China’s rapid growth.  Apart from these three periods, the U.S. has tended to be the better market in which to invest.  Oh, and some of these pro-U.S .periods have lasted decades.  Once again, a solid reason to increase non-Canadian exposure for diversification.

But has this currency move gone too far?  Let’s crack open the old eco text book and take a look at the purchasing power parity (PPP) theory.  Essentially this contrasts the cost of goods in one country to another, given consumer prices and the exchange rate.  The PPP between the Canadian and U.S. dollars shows that after being overvalued since 2005, the Canadian dollar has finally passed into being undervalued.   Of course the predictive powers of this approach are limited given how long a currency can remain over or undervalued.  Note the Canadian dollar was undervalued from 1993 through to 2004, these are long cycles.  With a reading of -8%, we also wouldn't’t view the degree of undervaluation as severe at this point.  But would agree the steepness of the drop is very, well, steep.

We are remaining U.S. dollar bulls but this call has less conviction today as it did in years past.  Not that the fundamental argument has changed, more the conviction lessens due to the move in the exchange rate to date.  Everything is relative. 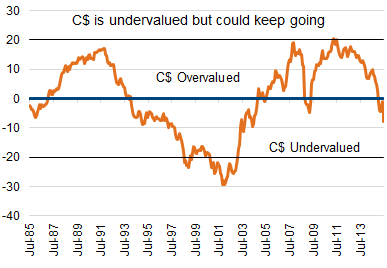 While the Canadian dollar is 8% undervalued against the U.S. dollar, the yen is 40% undervalued.  This is extreme and worth taking notice.  It is very rare that an exchange rate will move that far in one direction or remain there for long.  Of course Quantitative Easing in Japan, potential Fed tightening, the fundamental reasons are more evident than in Canada’s case.  Coincidentally the producer price version is also 40% undervalued for the Japanese yen.  While not this simple, a Japanese manufacturer essentially has a 40% cost advantage over a U.S. competitor given the exchange rate.  That is one huge advantage.

In broken dollar part 2, we make a few adjustments to our investor profiles.