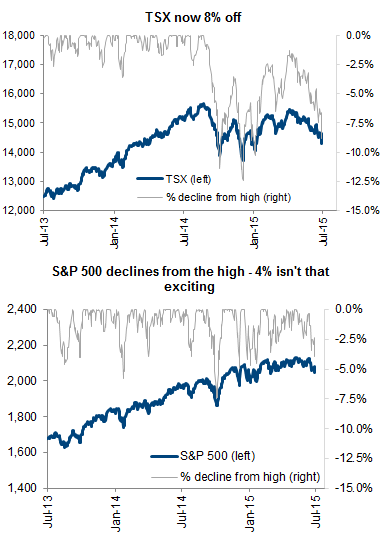 It seems the headwinds, or body blows if you prefer, are taking an increasing toll on the equity markets.  It may be a long time in coming, the S&P 500 has not seen a correction since 2012.  Although that doesn’t mean all that much, nor does it mean we are necessarily “due”.  The S&P 500 had run into the 2,125 level four times during February thru June which effectively sapped any market momentum.  During this time the market wrestled with higher bond yields, a loss of earnings growth momentum and relatively elevated valuations.  But it has been the BIG MACRO news that has created this latest period of weakness.  This has included the Greek debacle as negotiations were shelved while the populace held a referendum.  A text book bubble to bust in Chinese equities, still the 2nd largest market in the world.  Plus the good news of a pending nuclear deal with Iran.  Is a loss of momentum combined this big scary macro environment the place setting for a correction?  Perhaps, but that isn’t our bet.

At the moment the S&P 500 is down a mere 4% since its high.  The TSX on the other hand is down 8% from its April high, or 9% if you want to measure all the way back to the August high (chart).  The additional pain for Canada is natural given softer economic data and greater market exposure to commodities.  Seeing the TSX down 10% at this point wouldn’t be too surprising.  But we don’t think the S&P 500 will get into correction territory.  These macro factors are big and scary, but the real impact may not be that great.

Greece
Even as I write this post, the Greek government has tabled a potential deal and markets are up.  I will marshal on nonetheless.  Any deal needs parliamentary approval in Greece Friday then off to the EU this Sunday.  Who knows.  The populace voted in support of the current leader saying “no” on austerity and then government has to sell a deal to a fractured parliament on more austerity.  Maybe the 60 euro limit on ATMs and an economy that has grinded to a halt is changing the mindset.

All of this is noise.  It will move markets but won’t change the underlying trend.  Greece’s GDP is small, trade is small and the cost to bailout is also small (small by bailout standards). The financial contagion risk has also been largely immunized.  Most debt is owned by government bodies, not other banks.  Even funding of Greek banks has been coming from ECB, not interbank lending.

Best guess, this has been brinkmanship to the highest level but a deal will get done.  What does a deal mean?  We could go through this again when the road catches up with the can we kick.

China
If Greece is a non-event for the longer trends in global markets due to its size, the same can’t be said about China.  2nd largest economy in the world and the 2nd largest equity market based on market capitalization.  After remaining relatively flat for years, the China equity market started moving higher last July and peaked up 150% in June.  Since then half of the gains have been returned based on the Shanghai Composite.  My favorite line come from Businessweek – “In China, the invisible hand of the market sometimes needs help from the iron fist of the state.”  The government added liquidity to markets, encouraged investors to buy and managed to create a fast bubble.  Now the government is doing everything it can to stem the bust.  40% of the market cap of China has suspended trading, multiple rate cuts, relaxing of margin rules including allowing investors to use their homes as collateral, funds funneled to brokerages to do open market buying, no IPOs and directors or any investor that owns 5% stakes in companies can’t sell.  Akin to throwing everything at it including the kitchen sink.  “Rainbows always appear after rains” was a recent caption from the People’s Daily.

Too early to tell if the pain is over, markets did jump up yesterday and are up again today.  When all those suspended companies start to trade, where will they open?  There is a big long term negative impact on their financial markets from both confidence and the degree of government intervention.  The good news is the sell-off has not spread contagion to many other areas of the China economy.  Interbank liquidity remains high, spreads are stable, for now.

While it is estimated 90 million Chinese now own stocks, the overall wealth effect of this market weakness is likely limited given the low aggregate household exposure.  Of course if things continue to deteriorate, perhaps when the suspended shares become unsuspended, this could spread.  The bubble was in part fueled to help companies, wrestling with slowing economic growth, reduce debt to equity levels and become better balanced.  There is still a large debt issue in China but so far it has not become an issue that could spread problems globally. That being said the government certainly has significant resources, a clear willingness to use them, with the goal of promoting stability. 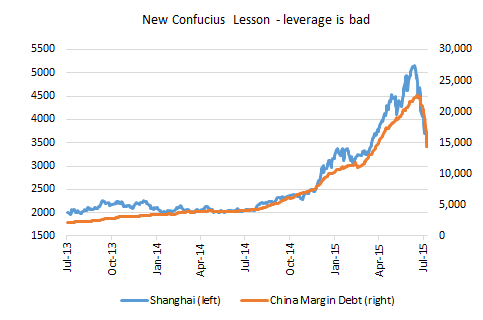 There is a connection between the stock investor in China and parts of the TSX.  During the past year the amount of margin ramped at a very alarming rate in China, essentially investors buying stocks using leverage.  However, it seems much of this was financed with strong levels of collateral and strict stop-loss rules.  So as the market fell, margin amounts were forced to contract and collateral was sold.  Some of this collateral is commodities, adding to the selling pressure on key commodities notably copper and the metals.

Our Markets
Markets are up today, nice to see.  Some progress (fingers crossed) in Greece, two days in a row of China markets moving higher, and even the Iran deal potentially delayed (good for oil).  Again, this is all noise, albeit the same noise sources that created much of the weakness.  Trying to look through the noise, or I guess hear past the noise, things are improving.  Global economic growth continues to improve, gradually.  The U.S. economy, after another soft Q1, appears to be reaccelerating despite the high dollar.  With lots of monetary stimulus globally, and inflation pressures still low thanks to oils decline, this quieter noise is encouraging.

2nd quarter earnings season has just started in the U.S. and may encourage more eyeballs away from the big macro and to focus on the micro.  The US dollar will be an issue given it is materially higher than last year.  That being said, the conference calls so far have been relatively positive on the economy.  Meanwhile, expectations have come down for Q2 with earnings now expected to contract by 3%.  The expectation bar has clearly been lowered, which may lead to more upside surprises.

The current or any additional weakness stemming from Greece and China should be viewed as a potential buying opportunity as we don’t see these as cycle ending factors.  Focusing more on North American cyclicals such as technology, industrials and consumer discretionary.  Plus financials given the rising bond yield environment (in the U.S.).  Financials should weather higher yields much better than many other areas of the market.  In fact, I fear higher yields more than China and Greece.