Coal is under pressure, but don’t’ expect any diamonds

Surprisingly the loan bright spot on our screens yesterday were coal stocks. The U.S. Supreme Court has stricken down the latest EPA regulation, delivering a victory to coal plants and miners. This good news has coal miners are up 10% on the day. Despite the one day gains, there are larger structural issues at play, which will continue to weigh on the industry.

Among the numerous pressures being extended on the coal industry, the worst is that the world’s largest user is beginning to make a shift away from ‘dirty’ energy. After years of double digit electricity growth, China is expected to grow electricity generation by only 0.2%. Global coal demand is off sharply, China’s coal imports have fallen to 2011 levels. It doesn’t help that natural gas has been hovering around its yearly lows. Cheap gas provides a higher incentive for domestic utilities to switch from coal powered generation to natural gas. In the latest data from the EIA 2015 coal production numbers to new 10 year lows. Coal prices have failed to ride the recovery wave that crude prices have enjoyed. Appalachian coal prices are down -5.52% MTD, this on the back of a 7.73% decline in May. Weakened global and domestic demand has led to declines in U.S. production. Both prices and demand are charted below. 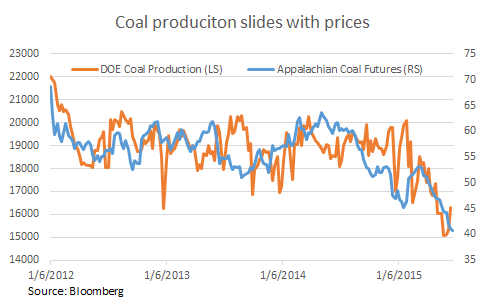 Lower volume, with lower prices is never a good thing for producers. The obvious pain trade has been with the coal miners. The two largest U.S. coal producers are Peabody Coal Co., and Arch Coal Inc. Four year charts are below, obviously, business hasn’t been good for some time. 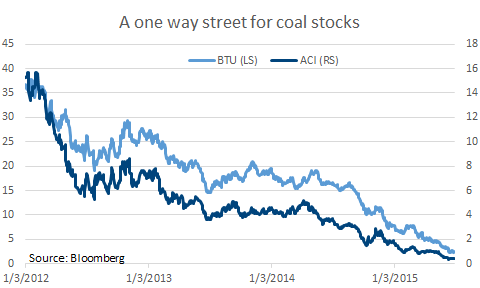 A secondary consequence of lower coal demand from utilities, and production is that railcar coal loadings are down significantly this year.  Back in March we noted the Trouble on the Tracks, that coal is a large component of overall carloads, and coal shipment volumes have declined significantly. That trend has continued, with volumes now down almost 20% YTD. At the time of posting we lightened up on our rail exposure, which has proven to have been a good trade. 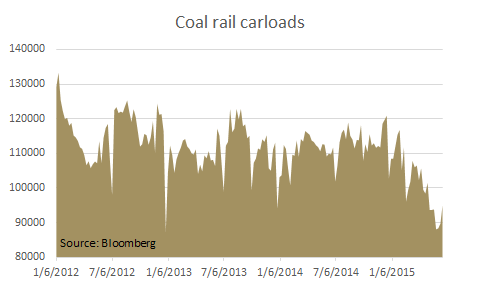 Despite the continued weak volume from Coal, Intermodal transportation continues to be a bright spot for the rails. Volatility on Canadian rail companies has been pretty high recently. While there are still risks, both Canadian National and Canadian Pacific are right back at the bottom of their extended fall, trading at levels last seen last year. Both companies are taking measure to minimize the effect of weak commodity volumes, with CNR taking the lead. Forex exposure remains a positive tailwind. YTD performance, CNR is down -9.95%, CP is down -10.99%, versus the S&P/TSX Composite down -0.60%. From a valuation perspective, blended forward P/E ratios are now trading in line with 5 year averages for both CNR as well as CP, we would have to see a little bit more of a pullback to bring these measure into ‘value’ territory. The bright spots for rail are that intermodal growth is still strong as well as tightening truck capacity to be drivers.

As a bit of an aside, this is a really good report from DOE/EIA which came out in April. The Annual Energy Outlook 2015 has projections to 2040. Coal will remain the second largest source of energy production well into the future. Usage will not fall to zero, it is simply testing a lower bound during the energy upheaval.

We would caution even longer term investors beginning to explore the sector looking for value. With no turnaround in site, and prospects for profitability beyond the two year horizon, caution should remain top of mind. The rails on the other hand look more attractive than they have in quite a while. Valuations have pulled back to within their five year averages, and on a relative basis compared to other stocks appear cheap. Within our portfolio’s we have exposure to Canadian National Railway as well as CSX in the United States. While not increasing our exposure at the present moment, we feel that the negative pressures facing all three are nearing the end.

The opinions expressed in this report are the opinions of the author and readers should not assume they reflect the opinions or recommendations of Richardson GMP Limited or its affiliates. Assumptions, opinions and estimates constitute the author's judgment as of the date of this material and are subject to change without notice. We do not warrant the completeness or accuracy of this material, and it should not be relied upon as such. Before acting on any recommendation, you should consider whether it is suitable for your particular circumstances and, if necessary, seek professional advice. Past performance is not indicative of future results. The comments contained herein are general in nature and are not intended to be, nor should be construed to be, legal or tax advice to any particular individual. Accordingly, individuals should consult their own legal or tax advisors for advice with respect to the tax consequences to them, having regard to their own particular circumstances.. Richardson GMP Limited is a member of Canadian Investor Protection Fund. Richardson is a trade-mark of James Richardson & Sons, Limited. GMP is a registered trade-mark of GMP Securities L.P. Both used under license by Richardson GMP Limited