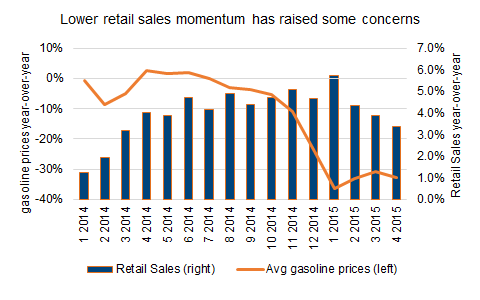 Roll back the clocks about six months and there was a very compelling case to believe the US consumer was poised to, well, bring back their free spending ways.  The labor market had normalized and there were some early signs for wage growth.  Personal debt to disposable income had improved to the lowest level since 2002, home prices had risen.  The US dollar had strengthened, making imports cheaper on the shelves.  And oil prices falling were certain to inject additional disposable income into their jeans.  This combination of events also had many expecting the US economy to help drive the global economy in 2015.  While Q1 GDP of 0.2% was an aberration due to weather and a port strike, personal consumption wasn’t great, up 1.9% which was much lower than the 4.4% pace in Q4 of last year.  Then in April, we had retail sales of $311 billion, excluding autos and gas, which disappointed markets that were expecting to start to see a rebound from Q1.  Mr. Market has certainly been expecting a stronger U.S. consumer….as have we.  But following a number of earnings misses in the sector, time to re-assess the thematic and find out where or what is wrong with the US consumer?

April retail sales were up 3.4% over the same month last year, not bad but not as good as previous months (average of 4.7% over the previous six months).  Mr. Market may have jumped to the nervous conclusion that the gain from lower fuel prices is in the rearview mirror now, as prices at the pump have started to pick up over the past few months. However, the rise in prices so far in May are just 5% higher than the lows from late last year and the year-over-year changes remains cheaper by about 30% (chart). The cheaper gas and firmer wages, has increased disposable income at a faster clip….but this has gone in a few directions.  The savings rate in the US has moved higher.  And it seems the consumer is spending more in some areas and not so much in others.

Looking at the different categories of consumer spending there are some obvious winners and losers:

Autos have been a strong performer, helped by pent up demand.  Not to mention the recent move back to more gas guzzling gas guzzling vehicles. Second has been the rise in spending on building materials as the U.S. housing market is gaining momentum and consumers are taking advantage of low rates to finance home improvement projects. At bit of a surprise has been the food services, the restaurant business, which is up 9% in the past year. It seems that Americans are buying that extra patty at Shake Shack and upsizing their milkshake. This is reflected in the high valuations within the restaurant space.

Losers – include electronics, general merchandise and department stores
General merchandise does tend to be one of the more defensive categories of retail spending and as such doesn’t see the uptick nearly as much as some other groups.  If you have an extra $50 in your wallet, likely going to consume some food over buying an extra container of laundry detergent.  Department stores is more troubling.  This could attributable to the move to more online or the port strike disruption.

We vetted the government economic data on retail sales with individual company results across the S&P 1500.  Specifically we looked at aggregate sales for each of the sub-industries directly exposed to retail consumers and found very similar trends.  At the low end was computer & electronics, department stores and hypermarkets/supercenters.  At the high end of sales growth was food, drugs and home improvement.

Conclusion – The US consumer likes to eat and improve their homes.  This isn’t new.  While not discussed in this post, there has been rising spending on leisure including travel.  These appear to be the primary destination of the recent improvement in disposable income.  However as this cycle continues to evolve, we do believe this spending will spread to other areas.  The US consumer has greatly improved and continues to improve.  It would be pre-mature at this point to start discounting this group because they spent all their extra money on gourmet burgers.