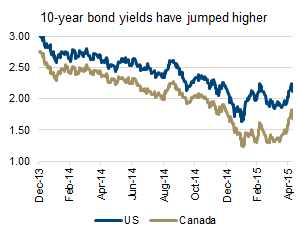 The U.S. 10-year bond yield has climbed from 1.90% to 2.30% during the past  two weeks, before declining off today’s Labour Report back down to 2.12%.  The Canada 10-year rose from 1.30% in mid-April to 1.84%, again before declining on Labour Reports down to 1.68%.  This increase in bond yields is a material move and the speed was also pretty quick, taking the market by surprise.  It is important to note this uptick in bond yields was not fueled by strong data in North America, but in Europe.  European bond yields reached such lows that some decent data has sent yields screeching higher.  The German 10-year moved from 0.10% to 0.55% for example.  These put upward pressure on North American yields.   So, where are bond yields going, in our view?

Let’s start with what the market is thinking.  Current forecasts are for the U.S. 10-year to remain about the same (2.13%) till mid-year, then begin grinding higher to finish the year at 2.42%.   We believe this will prove too conservative.  While we have been surprised by the speed of the recent move, as it has come at a time when the economic data is, well, dire.  U.S. GDP in Q1 had an initial print at 0.2% and will likely be revised into negative territory.  The delayed impact of lower energy prices and a higher U.S. dollar should both limit inflationary pressures.  This plus other data continuing to be soft should nip this current increase in yields in the bud at some point.  It may have been today.  However, looking down range, bond yields should rise, and we think more than the consensus expects.
Dollar and Oil, these are powerful forces on inflation and they have been pushing inflation lower lately.  But this will begin to normalize as the move in both consolidates a bit and the year-over-year change becomes less pronounced.
Economic data tends to swing like a pendulum around expectations.  Expectations get too high, data disappoints, and we swing the other way.  Currently, expectations have probably become too pessimistic and when the data mean reverts, the pendulum will likely swing the other way.  It is not lost on us how the recent mini move in bond yields came with no positive economic data.  What happens when we have the data as well?

Sticking with labour, we have seen quit rates rise and job openings reach higher levels than last cycle.  Quit rates are important because if the labourer does not feel comfortable enough to quit and move to another job, there is limited wage pressure.  Once folks start moving around with the vast majority are moving to higher pay jobs, we start to see a tighter labour market.  The sheer number of job openings is a sign as well.  Add to this, initial jobless claims at their lowest levels since 2000.  This is getting tighter.

Conclusion – This run up in bond yields may be premature, but it is coming.  We would be remaining shorter duration and limit interest rate sensitivity among equities.