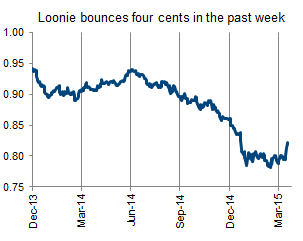 As the geese return to Canada to sit on fairways everywhere, the C$ has also been showing some positive signs.  To put things into perspective, the C$ dropped from about 0.95 to a low of 0.78 in March, but over the past week has rocketed higher to just over 0.82.  This has been a big move of four cents in the past week.  So this begs the question, is the loonie set to regain its lost ground or is this the random noise of the markets?

Currencies tend to move on the ebb and flow of data.  The rise in the CAD during the first half of 2014 was aided by strong energy prices, better Canadian economic data and some softness in the US data, pushing out further the ever elusive Fed rate hike.  The decline in the CAD in the 2nd half of 2014 was on the energy price collapse and accelerated when the Bank of Canada unexpectedly cut rates in January.  The recent recovery has been from some strong Canadian data, reduced likelihood of another rate cut and some delays in the expected US rate hike (again).  Its almost like a pendulum swinging back and forth.

Make no mistake if the Canadian dollar rises much more we will be selling Canadian dollars and buying US.  We have a few currency levers that can be pulled in our North American mandates.  Plus there are lots of Canadian companies that offer indirect US dollar exposure.

Longer term we still prefer the US dollar.  Better economic growth, delevered consumer, rates likely to rise later this year, the list goes on.  However the biggest driver has to be the longest looking driver - our currency does well when there is a bullish commodity cycle.  Unfortunately, there was a strong commodity cycle from 2003-2008, that was partially salvaged by QE and US dollar debasement in 2010-2013.  But we are now on the dark side of the commodity cycle and that is a benefit to the US dollar and a detriment to CAD.

There is another reason to embrace the US dollar - it may be a better diversifier than even bonds (take that modern portfolio theory).  If you are primarily a Canadian equity investor, your biggest fears are likely centered around a few key events (or they should be).  A slow down in the Global economy weighs heavily on our equity market.  But it also weighs heavily on our currency, which benefit US dollar denominated investments.  The US dollar is viewed as the safe haven so having some of these  in case of global economic weakness or tensions, acts as a natural diversifier (even in equity form).  Then there is the Canadian housing market - we don't believe it is set to pop, but our real estate market is a risk and it weighs on the Banks.  If trouble does develop in our real estate market, it will hurt the banks and hurt the Canadian dollar.  Again, some US dollar exposure would act as a nice buffer or diversifier.

Oh, and if these risks don't materialize, then the base allocation of Canadian equities should perform enough to offset the drag of US dollar investments.