A cold hard look at steel

It would seem that steel stocks should be booming right about now. Cheap input costs all around the industry; iron ore prices dropping below $50 a ton, coal dirt cheap and natural gas near its lows and a U.S. economic engine is running smoother than it has in quite a while. The one rather large demand bump in the road would be the collapse of the OCTG (Oil Country Tubular Goods) market which is roughly 10% of total demand. Tubular steel demand is highly correlated to drilling activity, and thus oil and natural gas prices.

As can be seen in Chart 1, the construction and automotive industries are the two largest for domestic demand, representing 40% and 26% respectively. Rising spending on nonresidential construction continued strong vehicle sales lead us to believe a positive demand backdrop for the end market.

Rising exports from China, and drastically reduced import numbers, mean domestic demand in China is drying up which is flooding global markets with their excess production. The cost of seaborne transport is cheaper than ever, which levels the playing field for demand to global producers. The world’s top steel producing regions by volume are China, Europe, Japan and the United States. For a matter of scale, Chinese production is over three times as much as Europe producing 779 million tons in 2013. 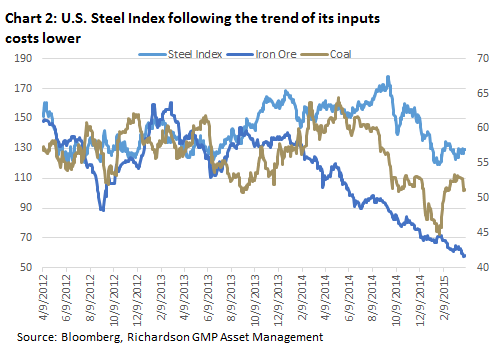 U.S. steel producers enjoyed a bit of a renaissance period towards the end of last year, but the sector as a whole has had a substantial selloff see Chart 2.

Unfortunately not only is the U.S. dollar putting pressure on commodity prices, it is also causing a surge in steel import, see Chart 3. As a group, domestic producers will all face a similar story - margins will likely be compressed due to competitive imported steel prices though demand from a strong economy is still decent.  The amount of imported steel in the U.S. has ballooned rising from just over 1.5M tons to 3.85M tons as of January 31st, 2015. This has resulted in an increase of total market share from 25 to 32% in just the past twelve months, according to the American Iron and Steel Institute. 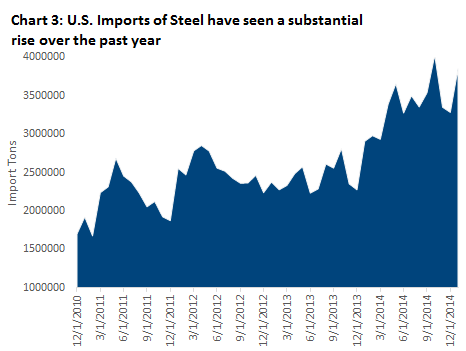 While we don’t’ see the recent selloff primarily as demand driven, the operating environment for U.S. steel mills has worsened materially. Though valuations are intriguing, we will not be buying in the weakness at this point.