The rapid growth of household debt and elevated investment in residential real estate have been key supports to the Canadian economy for almost two decades.

Last week the Bank of Canada governors kept interest rates steady at 1.25%, citing the recent slowdown in household credit growth as one reason for that decision.

How will the Bank of Canada react to a credit slowdown?

The Bank of Canada release says:

Note that the Bank is saying that the growth in credit has slowed, not that Canadians, en masse, are paying back their loans. Canadians have just slowed the rate at which they are going deeper into debt.

Most economists ignore the impact of private debt and the financial sector because these are not recognized in their models as having any impact on growth. Unfortunately, that view is incorrect as can be demonstrated by the historical record of asset bubbles and crashes.

One of the most recognized non-mainstream economists, Professor Steve Keen, author of “Can we avoid another financial crisis,” calls a few countries like Canada, “debt zombies-to-be”, referring to the painful deleveraging process that will be necessary to restore a healthier balance. Australia is also a debt zombie-to-be with even higher household debt ratios than Canada although total private sector debt is lower.

Here’s what Canada looks like compared to other developed countries in a 2017 report by David MacDonald called, “Addicted to Debt”: 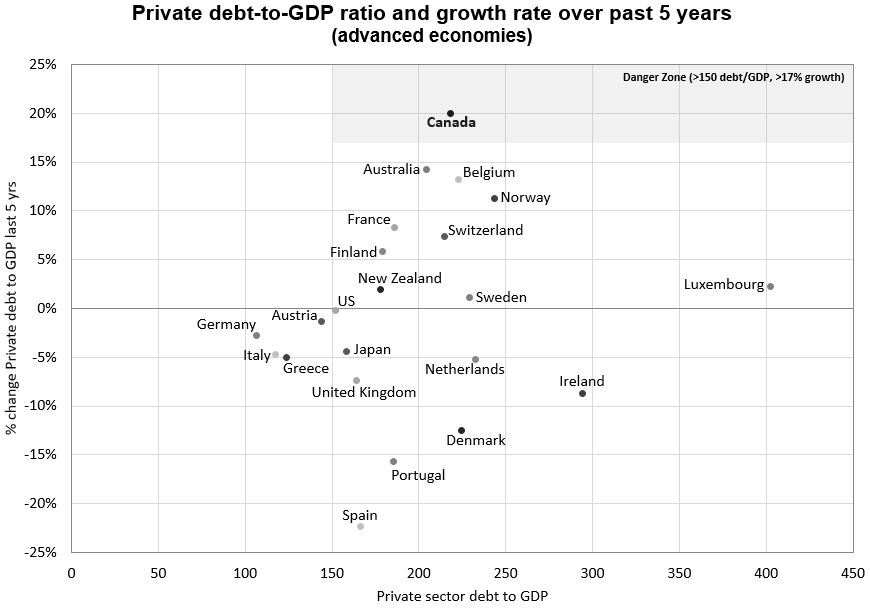 It’s clear that Canada is in the danger zone as shown on the upper right of the chart. Other countries like Australia and Norway are close to that zone, while China and South Korea would be in the zone, too.

The exponential growth of private sector debt in Canada and Australia makes the next recession likely to be much more difficult than the mild recessions that both countries experienced in 2002 and 2009.

MacDonald calculated what a credit slowdown will mean to the Canadian economy:

Appendix 1 shows what happens when private sector credit growth grows at the same rate for 4 years and then slows to 2.8% in the fifth year. The private debt/GDP ratio increases from 218% in 2016 to 250% in 2019 and then stabilizes at 250%. This means that the private sector has slowed the rate of increase of the debt mountain to the same as GDP growth.

The bottom line is a 6.5% decline in demand in the fifth year. In dollar terms this means the annual increase in debt slows from $384 billion to $154 billion, a drop of $230 billion. With the removal of that amount of incremental new money into the system Canada would experience a serious recession.

The BOC data show that the slowdown in credit growth might be starting now. What can the Bank of Canada do? There are extraordinary measures like quantitative easing and negative interest rates that have been used elsewhere but that would make the debt pile even bigger.

The good news for Canada is that the Canadian federal government has a relatively pristine balance sheet with only 30% of GDP in debt, one of the lowest in the developed world. So, there will be some room for an increase in the government debt/GDP ratio as the private sector attempts to repair its balance sheet by paying down debt.