The second longest bull market ever

The U.S. stock market reached a significant milestone recently. Measured by the S&P 500 index the trend of rising prices has continued unbroken for more than seven years. This makes it the second longest “bull” market since the Second World War.

Is there an indicator that will give us a signal that this impressive streak could be ending?

The U.S. market has now pushed higher for seven straight years after a bottom was reached during the Global Financial Crisis on March 9, 2009. This makes it one of the longest stretches of positive market performance without a major correction, defined as a downturn of more than 20 percent. Only the period from 1990 to 2000 lasted longer without a break. 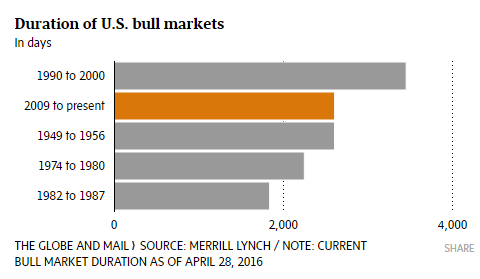 Source: The Globe and Mail and Merrill Lynch

This record-breaking streak almost didn’t happen. The S&P 500 pulled back by 19.48 percent over 157 days in 2011, so the 20 percent barrier was almost breached. A correction of more than 20 percent will end the run.

What about the current unbroken upswing? Is there a catalyst that could end it?

The alarm bell ringing faintly in the background is the lack of earnings growth for S&P 500 stocks. These earnings are reported quarterly and both analysts and investors like a rising earnings trend. In fact, they can get quite upset if disappointed by earnings results.

S&P Capital IQ estimates that earnings per share will reach $26.28 for the quarter ended on March 31 when all companies have reported. Multiplying that quarterly number by 4x gives us about $105 earnings for a year so with the index at 2075 means a Price-Earnings Ratio (P/E) of 19.76. The actual consensus forecast for 2016 EPS is higher, at 118, but this number might be too optimistic given early results.

People have been willing to pay a premium for stocks for a variety of reasons at different times, but most often it’s because they expect growth in earnings. A P/E ratio of 20 is 25% above the long-term average of 16.

Year-over-year growth is expected to be minus 7.8% (see yellow line on chart).

Earnings have been declining for 3 quarters in a row, something which hasn’t happened since 2009 and rarely happens outside of recessions. 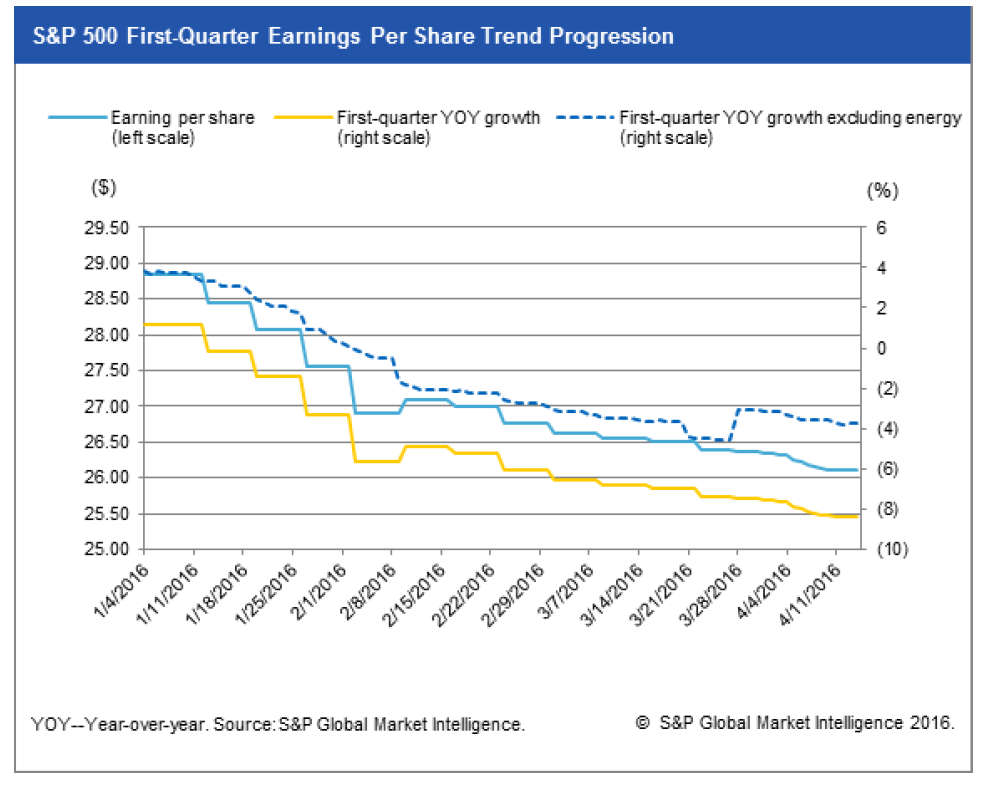 Only three sectors (out of ten) will have year-over-year growth this quarter — Healthcare, Telecommunications and Consumer Discretionary, which is growing the fastest. Consumer Discretionary includes autos (Ford), airlines (Delta) and cruise ship companies (Carnival and Royal Caribbean). But even without the disastrous energy sector the S&P 500 will report a decline of 2.5% in earnings this quarter.

The worst sector is energy which is experiencing an earnings collapse that is without precedent. The sector as a whole will lose money, something which hasn’t happened since record collection began. Companies with the largest declines are Exxon, Halliburton and Transocean. The collapse in capital spending in the oil patch and WTI is decimating earnings in this sector. The lack of revenue and earnings is so bad that Exxon Mobil lost its coveted AAA credit rating, held since at least 1949.

With widespread weakness in earnings the long unbroken climb in stock prices is at risk. We will be watching closely for signs of either a strong rebound in earnings later this year or a stock market correction of more than 20 percent.