Canadian banks are not immune to the next credit crisis

I listened to a conference call where a bank analyst explained why Canadian banks are immune to the forces that pushed down stock market valuations of U.S. and European banks.

Canadian banks trade at elevated multiples of book value compared to their global peers. How long will that premium last?

There are two views of the Canadian banks. One view, favoured by a large number of U.S. hedge funds, is that Canadian banks are trading at extremely high valuations that cannot last.  These skeptics believe that the current downturn in the energy sector will crush earnings at the Canadian banks. If the energy downturn doesn’t rock the banks’ world a crash in residential and commercial real estate will force banks to take losses that will wipe out earnings and make the banks trade at deeply discounted multiples of book value and earnings. Here is one of the more comprehensive summaries of the pessimistic view.

I got curious about this as I can remember when Canadian banks were unloved and trading at a discount, as happened in the 1980s. But research revealed that you don’t have to be able to remember the 1980s — you just need to recall 2004!

It’s easy to see that Canadian banks’ valuation surged ahead starting in about 2005 and have maintained a premium ever since. But before that, all the way back to the 1980s, U.S. banks held the premium position. This is an excellent example of “recency bias”.

The chart shows that Canadian banks trade at a premium of more than 50 percent to U.S. banks. In the last two years Canadian banks have slipped a bit, down from more than 2x book value to 1.5 times book value. But, unlike their American cousins, Canadian banks never traded below 1.0 times even in the depth of the global financial crisis. This is one fact that feeds the complacency — Canadian banks sailed through 2009-10 with hardly a scratch.

It’s become conventional wisdom to believe that the higher ROE of the northern banks will protect them from tumbling into the valuation abyss below 1x book value where their U.S. counterparts languished for a couple of years.

The skeptics believe that investors in Canadian banks are ignoring obvious signs of a looming credit cycle. Credit cycle is the euphemism ascribed to a period of a year or two when banks suffer massive loan losses, usually during a recession, destroy earnings and shrink book value. It’s been so long in Canada since there’s been a credit cycle (early 1990s) that investors now believe that there will never be another cycle. This attitude is foolhardy.

Banks experience credit cycles after a period of rapid debt expansion when underwriting standards are loosened and both loan officers and borrowers lose their fear of debt. Note how household debt and non-financial corporate debt has grown over the last few years. 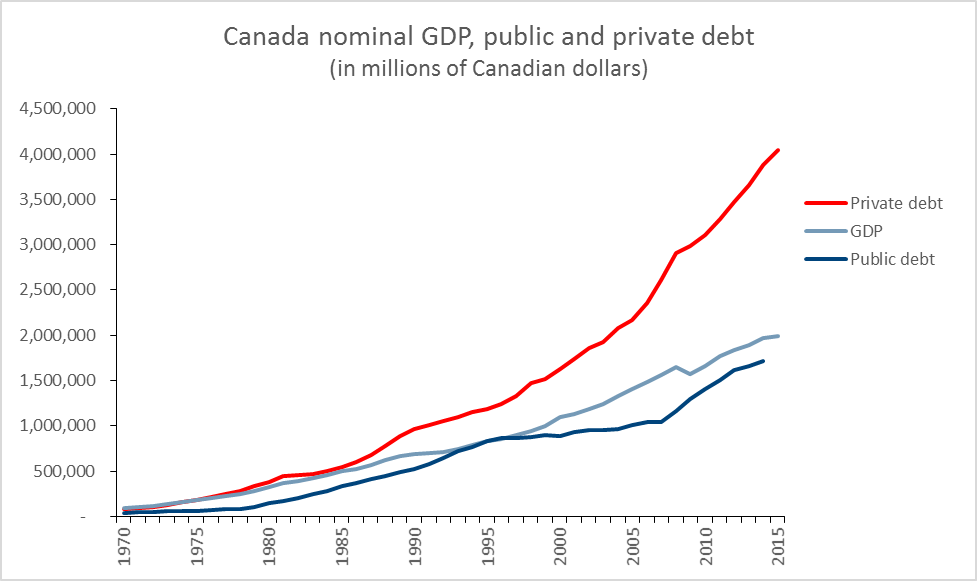 Private sector debt has doubled since 2004, which coincidentally is the time that Canadian banks started to trade at a premium to U.S. banks. Or is it a coincidence?

It’s likely that the unprecedented growth in private sector debt, from less than $2 trillion to more than $3.6 trillion, gave banks the expanding profits and rising dividends that justified premium valuations. And the credit crunch always follows soon after. Once debt growth slows and eventually turns negative, loan losses will soar and bank valuations will come back to earth.

You can take that to the bank.