Brexit, a crisis that shouldn’t happen

Brexit, the handle given to the prospect of Great Britain leaving the European Union, could be triggered at a referendum to be held on June 23. The “remain” side is confident, but some analysts say there’s a chance of a “leave” vote. Since the impact of Brexit would be disastrous for both Britain and the EU, widespread complacency is a worry.

What are the chances British voters will express their frustration by voting to “leave”? What would it mean for the Pound Sterling?

The consensus is that Brits will vote to remain in the EU, taking the conservative route at the last minute. For example, the Scottish independence movement lost in 2014 when the referendum for independence failed by a vote of 55% to 45%. However, there are some stating that the complacency around the Brexit referendum is dangerous. According to The Economist, a vote to leave is more likely than people think.

Dissatisfaction comes from immigration policy, the cost of Brussel’s bureaucracy and fears about free movement of people throughout the EU for groups like the Syrian refugees.

A columnist with the Guardian states that the “remain” camp is in denial and the threat of Brexit is real. She refers to fears about terrorist attacks like Brussels and Paris as enhancing the “pull-up-the-drawbridge” syndrome.

Prime Minister Cameron has been riding a downward trend in popularity and his February 20th announcement of the referendum didn’t help. The latest blow came from a link in the Panama Papers to his father’s estate and offshore accounts. Prior to that several of his Tory Cabinet Ministers joined the campaign for Brexit. While society’s elite would be expected to rally around the establishment and push for a “remain” vote, the elite is split too.

Boris Johnson, the populist Mayor of London, announced that he’ll campaign for Brexit. And he’s the Conservative Party’s most effective campaigner. 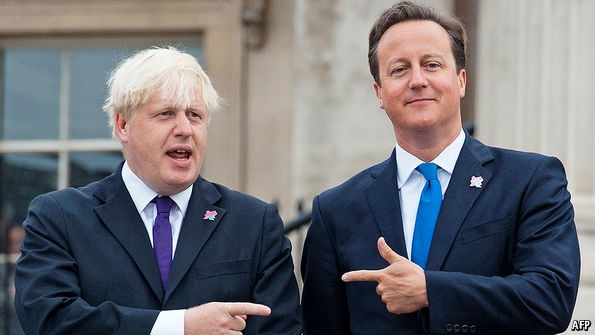 Source: The Economist and AFP

The economic arguments supporting Brexit are weak while, as the IMF says, the “severe damage”, that will follow is real. The “remain” camp will trot out frightening scenarios, including the fact that 50% of Britain’s exports go to EU countries but only 10% of EU exports go to Britain. ‘Services’ are the biggest exports where City of London bankers give financial advice and provide expertise that rivals Wall Street, with pay packets to match. Those people, key backers to Conservative politicians, have the most to lose.

But the strongest argument for Brexit supporters is emotional, not economic. Brits are responding to the same human character trait that Donald Trump tapped into with his promise of a wall between the US and Mexico – one of the things that propelled him to lead the Republican Party nomination race.

The biggest impact of Brexit would be in financial markets.

The rate of exchange between the Pound Sterling and the U.S. dollar is known as the “cable” and is one of the most important currency trading relationships. London as a financial centre depends on its strategic connection with the U.S. and Wall Street as well as preferred access to Europe. As Britain runs a large current account deficit its economy depends on an ability to raise money to finance that deficit. The disruption after Brexit would be disastrous, at least for the currency traders in the City, and possibly for England’s economy.

As a financial centre London has attracted thousands of highly paid traders and investment bankers. Brexit would put that community at risk and Europe would be free to develop its own global financial centre, probably in Frankfurt. This would enhance the importance of the Euro and diminish the importance of Pound Sterling. British prestige would take a hit as well due to the Pound’s diminished role although voters might not see that as important.

If the Brexit side wins in June the Pound would drop against the Euro, due to a crisis of business confidence. Exporters would be helped while domestic-only plays such as house builders and REITs would be hurt. London house prices could experience weakness because a number of investment bankers and traders, crucial to supporting a very expensive housing market, would leave for the Continent.

Trump’s popularity is a sign that Brexit complacency is a mistake. Voters everywhere are angry. The referendum could be decided on emotions rather than reason. Cameron might have made a serious blunder.