Investors are familiar with that long-standing tradition for listed-companies — the quarterly conference call. Often these calls are dull affairs with obscure questions. Usually you’ll hear something like; “great quarter, guys, just a couple of questions on your outlook for 2016.” But once in a while there’s interesting questions and even some fireworks as happened this week with the Canadian banks.

Anyone can go to investor relations on the website for a company like The Royal Bank of Canada and access the most recent quarterly results, including a slide deck and transcripts or audio from the conference call with analysts asking questions.

So on the RBC quarterly conference call we had some intense questioning. By the way, the day after this call on February 24, Royal Bank, RY, dropped almost $2 from $69.63 to $67.81.

The main issue is the bank’s provision for credit losses (PCLs). RBC claimed in their report that PCLs had been 25 basis points (bps) and they expect them to increase to 30 to 35 bps, which they said is within the normal range for a cycle. In an extreme scenario stress test with oil staying below $30 and a recession in Canada, RBC allowed that losses might creep up to 40 bps. By the way 100 bps is only 1% so 25 bps is about ¼ of 1%, a very small amount of losses in today’s turbulent business environment.

On the earnings conference call, management disclosed that as part of its enterprise-wide stress testing, in a recessionary environment (on a national basis), CM could see its PCL ratio increase to between 50 bps – 60 bps, roughly double the current rate. As with peers, based on historical data and the foregoing analysis, whether the bank made its stress-test severe enough remains an open question.

This excerpt is from a report by Peter Routledge of National Bank Financial.

The chart below is from the slides accompanying the RBC conference call: 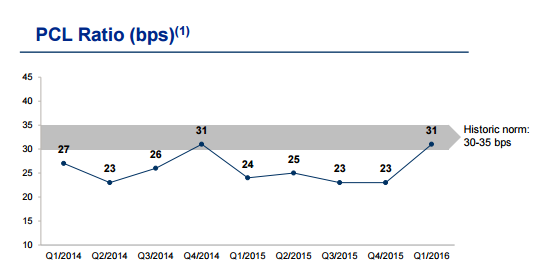 This part of the presentation put some analysts into shock. After all, as some of them asked, won’t the current recession in Alberta create substantial loan losses in the energy sector that go beyond the “historic norm?”

And it’s not just Alberta that’s causing concern. This week, a Deputy Governor of the Bank of Canada spoke out regarding household debt in Canada:

The rise in household arrears could force some vulnerable homeowners to sell their homes or eventually default on their mortgages and other consumer debt. If defaults rose quickly or if many households were forced to sell their homes, house prices could drop sharply across Canada, particularly in Vancouver and Toronto, which have recently experienced exceptionally strong price growth.

Of course those that study these things closely, like Schembri and some research analysts, know that this cycle is going to be worse than a normal cycle. But you won’t hear about that on conference calls held by executives from the Canadian banks. After all they are the very people that helped Canadian households get into this massive debt bubble.

The current downturn will turn into a financial crisis for some, especially those that lose their jobs in the energy patch and others who are all-in on the real estate bubble. And 25 bps or even 50 bps doesn’t even begin to describe how big the losses will be.