Worries abound for investors domiciled in Canada. The collapse in energy investment and the recession underway in the Prairie Provinces give people lots to fret over. But with great difficulties often comes interesting opportunities. Is it time to “come back to Canada?”

In a recent quarterly outlook report, the investment team at my firm, Richardson GMP Limited, chronicled the risks and opportunities of this late stage bull market.

I encourage you to read the report as it contains valuable information.

For this note I want to focus on a couple of points relating to Canada.

The authors suggest a “slight underweight” for Canada and they favour international developed markets. I agree but I would go further and say “avoid Canada for now.” After all, all Canadian investors have Canadian exposure in the form of jobs, Canadian pensions, real estate and often all of the above. So we are already “overweight” Canada compared to a US or European-based investor.

Why not diversify with your investment portfolio that can be easily moved to different currencies and different markets? Here are some reasons for diversifying beyond Canada.

The Governor of the Bank of Canada, Stephen Poloz recently indicated that Canada is experiencing a $50 billion hit in its “terms of trade”. The Richardson report suggests that Alberta is important to the Canadian economy and the loss in oil and gas investment will be $40 billion in direct investment alone, before accounting for multiplier effects through lost tax revenue, lower royalty revenue and layoffs in support services. It’s easy to build a case that the downturn in the energy industry and associated ripple impacts across Canada would inflict a 4% hit to GDP, or about $70 billion. This magnitude of lost investment implies a severe recession if it happens over a short period of time like one or two years. 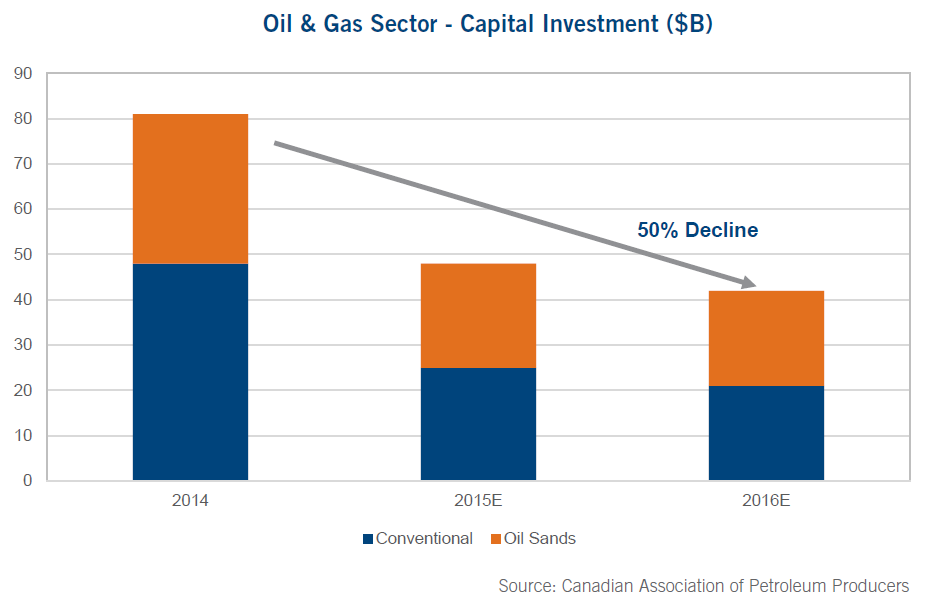 Business investment carries a large influence on GDP growth. Confidence is a big factor in business investment since decision makers often have their own money at stake and/or their well-paid executive job is at risk. Fear of making a mistake leads to herd mentality. The last two decades of oil sands plant construction is an example. While it was harmful to build so many plants at the same time because of the cost inflation caused by a shortage of labour, it didn’t stop the investment mania. Now energy executives will stop spending. It’s the boom/bust cycle that Alberta has been subject to before as happened in the 1980s.

Recognizing this economic weakness, the report states that “we are quite likely to get another rate cut in the first half of 2016.” I agree as the dire outlook will jolt the BOC into further action, if only to be seen to be doing something. However, rate cuts won’t make any difference to Calgary-based decision makers in their desire to cut spending.

In the consumer sector the transmission channel for rate cuts is through mortgages since that is the largest loan for most. But the cost of mortgage finance won’t drop much as the key determinant of mortgage rates is the five-year GIC rate. The report forecasts that the associated five-year Government of Canada rate will rise during 2016, limiting any chance of lower mortgage rates. See the table showing the rate up to 1.40% in one year.

Canadians will, at some point, wake up to the fact that the decade-long borrowing binge is risky and they will finally start to resist the siren call of irresponsible lenders who keep luring them deeper into debt. Going from borrowing and spending more to paying down loans is “deleveraging” and it’s very painful for borrowers and lenders as well as negative for economic growth.

So “underweight Canada” or even avoid Canada altogether for now. A better time to buy Canadian stock market assets will appear later, at lower prices.