Canada's central bankers take the first step out of denial

Readers know that I’ve predicted that declining commodity prices — oil, natural gas and base metals — will hit Canadians hard. On January 7, 2016, in an abrupt reversal, the Governor of the Bank of Canada, Stephen Poloz, admitted that Canadians will feel pain. He even put a very large number on the size of the shock.

Stephen Poloz, in his January 7th speech, made headlines stating that Canada faces a “terms of trade” shock of $50 billion per annum. He suggested that income will drop by $1,500. By household it would be $4,500. These are very big numbers. Almost everyone will find it hard to absorb such a hit. And as income taxes increase for the top earners, even the 1% will feel it.

Prior to this shock, I was concerned about Canadian households’ ability to support record-high debt levels and predicted a housing crash when households decided to (or were forced to) repay some of their debts. But a $4,500 annual loss could force the start of that de-levering process now.

This recent speech contradicts statements made eight months ago, in April 2015, when Poloz said Canada faces an adjustment but the impact will be short-lived. The Globe and Mail on April 24, 2015 quotes him;

“It’s a very front loaded or one-time kind of shock … starting in the second quarter we think the positives will be more important than the negatives, and certainly in the second half of the year [2015] , this shock should be fully behind us.”

Oops. That was wrong. Perhaps we can call it “denial”.

And it’s not just crude oil. Prices for other commodities such as copper, coal and iron ore have plummeted. A Financial Post article on January 8 highlights the worrisome outlook for iron ore and its impact on small towns in Quebec. It doesn’t look good for Sept-Iles and Labrador City as Australia has larger, up-to-date facilities, with shipping routes closer to China and modern equipment due to massive recent investments in infrastructure. 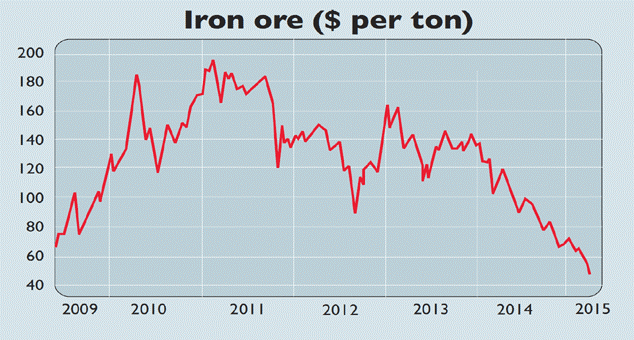 Iron ore had already fallen from a peak in early 2011 of US$200 to $50 by the time of that April speech. So why the optimism back in April?

The Governor may have been fooled, like many others, by economic theory that predicts that production would be reduced when prices drop and supply cuts would push prices back up. But some producers can’t cut production as they owe large debts and they have to earn cash to pay interest on their loans or go bankrupt. Other producers with low costs and low debt like to increase production to force their weaker competitors out of business. The Saudis, as low-cost producers are targeting US shale, Canadian oil sands and offshore producers with high-cost operations.

The decline in the Canadian dollar helps but it’s not a magic bullet.

From the January speech:

“There is no simple policy response in this situation. The forces that have been set in motion simply must work themselves out. The economy’s adjustment process can be difficult and painful for individuals, and there are policies that can help buffer those effects, but the adjustments must eventually happen.”

So he’s changed his tone between April and January. This should be welcomed as it represents a more realistic description of the challenges that face this great country.

As they say, the first step is recognizing that there is a problem.