The Liberal Party won an election this week, with a huge mandate for change. One of the most interesting promises by candidate Trudeau was the pledge to run a deficit and spend on infrastructure. There is a tax cut for middle-income Canadians, and tax increase for high earners. I believe that one of the biggest challenges will be managing the housing bubble. Can our new Prime Minister save the Canadian housing bubble from bursting?

The economist Sherry Cooper, formerly of BMO and now with Dominion Lending Centres, correctly points out that the housing industry is peaking and a slowdown is inevitable. Ms. Cooper shows her bias by repeating the myth that Canadian households have “rock solid” balance sheets. Perhaps her employer, one of the largest mortgage lenders in Canada, influenced her analysis. In any case that statement about household debt is demonstrably false.

Unfortunately for the Canadian economy it’s impossible for everyone to successfully lower their debt levels at the same time. You don’t have to be an economist to understand that if the majority of Canadians suddenly try to repay their loans there would be a shortfall in demand, as car dealers and house builders would suffer from a dearth of buyers. Almost every transaction in those categories involves someone taking on more debt.

The good news is that the Liberals won the election and they stated clearly that they won’t try to balance the budget. The new government will run a deficit for three years, of a modest size. This is wonderful news because if Sherry Cooper is right, and I think she is when it comes to “peak” housing, there will be a significant slowdown in spending in housing construction and renovation so the government’s pledge to spend more will help moderate the impact.

Can the government of Canada run a deficit that’s big enough to counteract the impact of a slowdown in housing, even a mild one?

First, let’s examine the possibility of a crash in housing. A bursting of the bubble would be similar to the U.S. where spending dropped from 6% of GDP to 2% of GDP from 2006 to 2010. In Canada a drop of that magnitude would mean about 4% of GDP or about $70 billion in spending. That’s just the direct impact and doesn’t count the associated spending like marketing, sales commissions, bank lending and advertising. That amount of money would mean a recession, no matter how much infrastructure the government built. 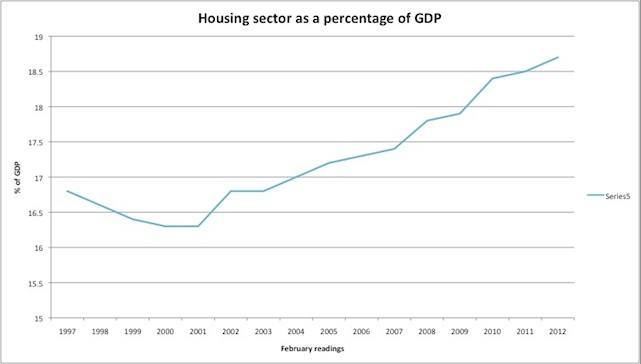 The Huffington Post article quotes one analyst suggesting $4 billion for new projects. This would be less than 10% of the total drop in spending in the “hard landing” scenario.

Second, a “soft” landing might be more manageable. But Justin Trudeau’s government would have to be willing to spend substantially more, given the slowdown in spending in the energy sector combined with a housing correction.

Canadians better hope that the government takes its mandate seriously. It is time to run a large deficit for the federal government, perhaps more like 3% of the economy or $50 billion.

Call your Member of Parliament today and tell him or her — please spend more money, even if the government has to borrow more to do it. After all, if it was acceptable to borrow all those billions to build condos for speculators, it should be at least as acceptable to borrow to build infrastructure that improves the quality of life for all Canadians.