The long-anticipated start of the monetary tightening cycle in the United States by Chair Janet Yellen and the Federal Reserve Bank didn’t arrive on Thursday as some expected. In previous cycles the first move by the world’s most important central bank meant the beginning of a series of rate increases, sometimes causing market disruption as in 1994. What does it mean that Janet Yellen failed to make that first move to higher rates?

The Federal Reserve has a dual mandate; full employment and stable inflation. Other central banks such as England and Canada operate with just one goal, controlling inflation. Yellen yesterday added a third concern by talking about China, global growth and world financial markets. That’s too much for any central banker to control.

The central bank is struggling with a decision to move away from its unusual policy of low interest rates (0.00%-0.25%) and start unwinding the excessive accommodation in monetary supply. They backed away again from taking that step, even though some economists expected it and others think it’s overdue.

Recent reports show steady growth but other data are mixed, and this makes the Fed’s job tougher, especially when decisions will be made on a “data dependent” basis. Given that the Fed is supposed to look ahead by six months or more, the central bankers may have put themselves into a box. And the walls of that box are closing in on them.

In the past Chairman Yellen has said that low inflation rates aren’t going to preclude a rate hike. At other times Fed officials have said they will target the unemployment rate. But that rate keeps dropping and dropping, faster than what prevailed in 2007 before the Global Financial Crisis.

Here is how the unemployment rate has dropped: 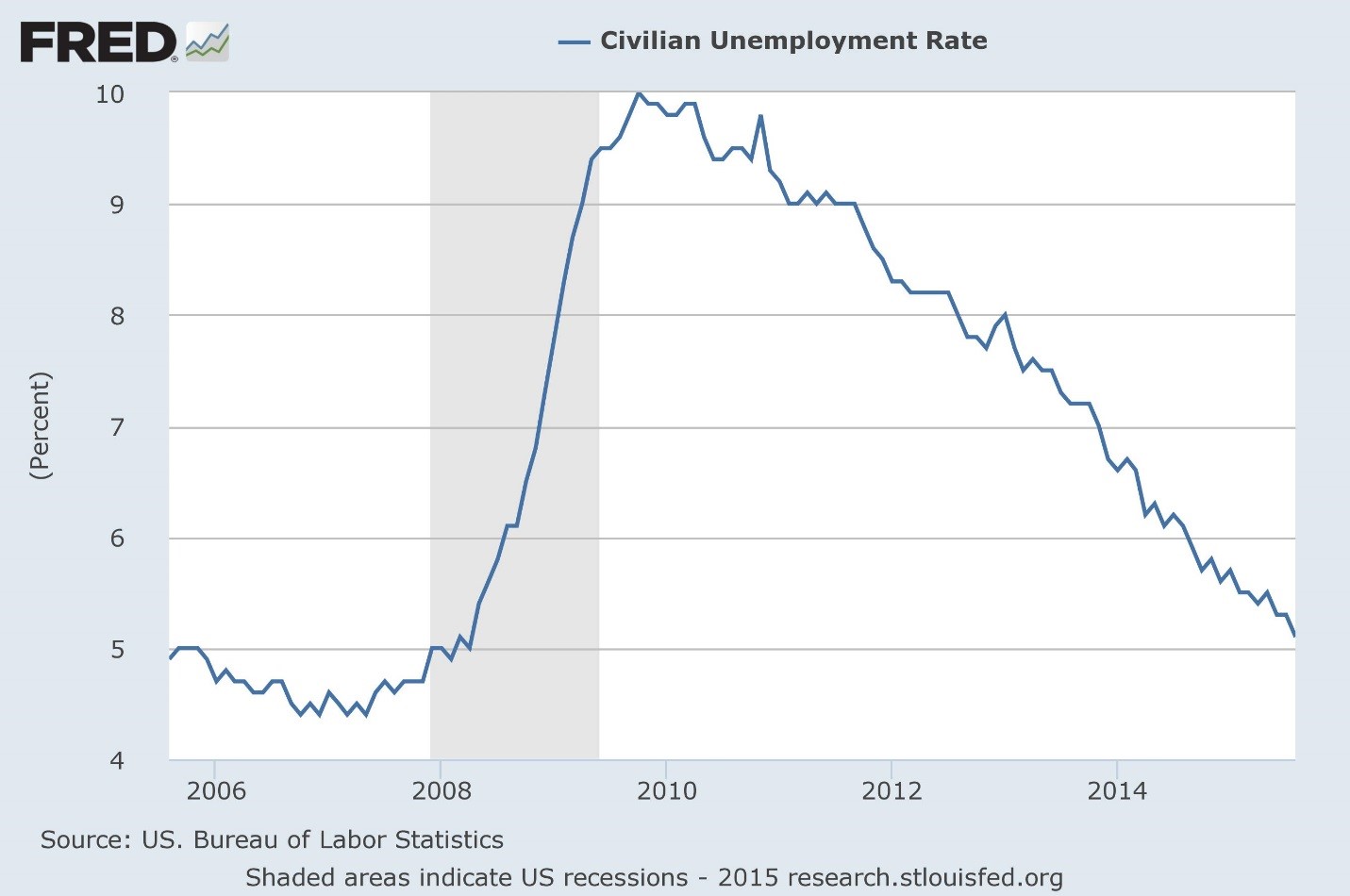 From 10 percent after the Global Financial Crisis the rate is now near record low levels, touching 5 percent. Not long ago 5 percent was considered “full employment”. But apparently that’s not good enough in 2015 even with the risk of accelerating wage inflation.

The Fed is also required to control inflation. That measure has been performing very well, especially now that the price of crude oil has collapsed. Here is the GDP implicit price deflator: 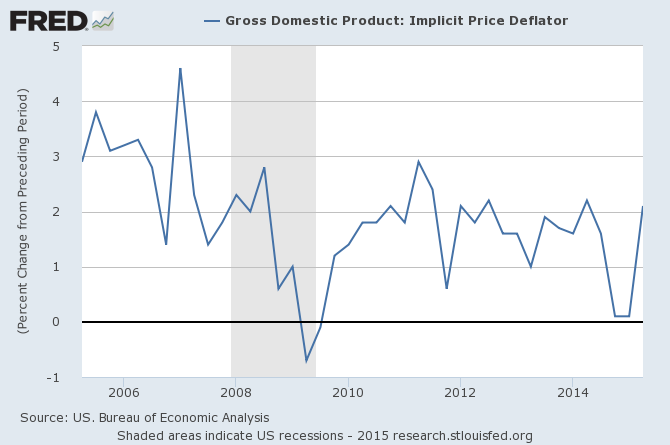 There’s no problem with inflation below 2 percent, for now. This trend gives central bankers room to delay, as they can’t be criticized for allowing inflation to soar out of control yet.

Yellen’s remarks, which can be found here, emphasized concerns about volatility in the world’s markets and China’s financial stability. But that’s not one of the Fed’s mandates. Perhaps the best explanation is simply fear. Decision makers don’t want to choke off a fragile economic rebound. This concern could be a desire to avoid the mistake that central bankers made in 1937. During the Depression some allege that central bankers moved too soon to tighten the money supply and caused a secondary collapse almost as bad as the one in 1932. Nobody wants that!

One more graph shows, perhaps, why central bankers refused to take that first step this week. This measure is a ratio of number of people with a job to the total number of people of working age. A more lengthy analysis is available in an article by Professor Steve Keen, contributor to Forbes and author of “Debunking Economics”. Please contact us for a copy. 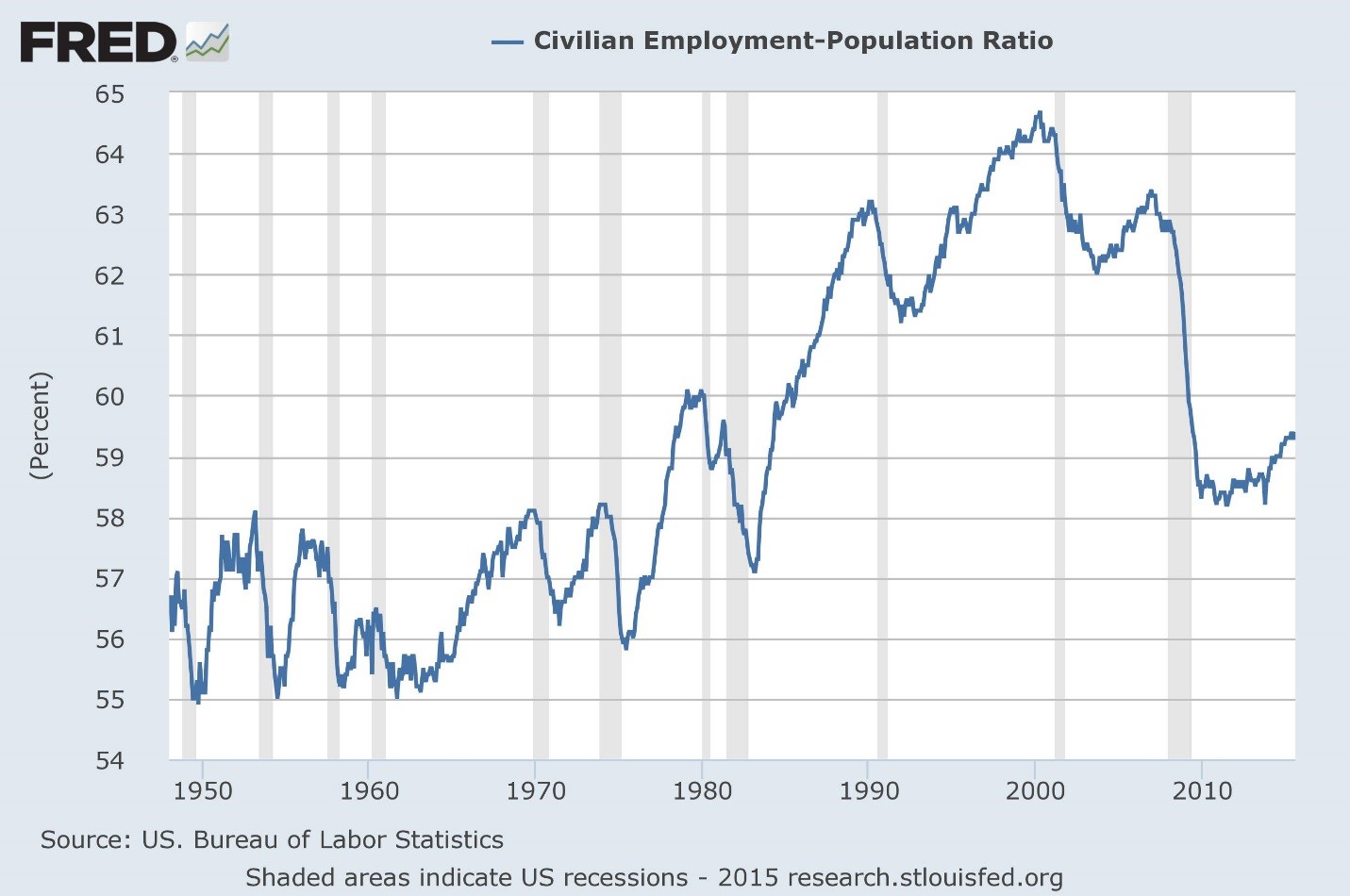 The current level, which has improved only slightly since 2009, is still well below levels that prevailed for decades. A lot of people, especially men, are still missing out on this recovery. Men are faring especially badly as traditional jobs for those who are likely to be laid off in a recession and rehired in a recovery are not as readily available this time yet. More housing construction would be helpful, for example.