One of the most awe-inspiring residential real estate bubbles in the world exists in the central part of London, England. Pushed higher and higher by eager buyers from among the financial industry top earners, Russian oligarchs and oil-soaked Saudi princes, central London flat prices reached levels that can only be described as jaw-dropping.

The far-fetched and dangerous argument in favour of real estate speculation that I debunked in my book, “When the Bubble Bursts: Surviving the Canadian Real Estate Crash” (Chapter 4 “The Investment Myth”), can be summed up as THE GREAT FOOL THEORY OF INVESTING.  The argument goes like this — I’m a fool to pay such an elevated price for this London flat but there’s an even greater fool coming along who will buy it from me at an even higher price. To make people feel better about employing such a risky strategy a justification appeared in various newspaper articles during the last few years that goes one step further. Flats in certain locations such as central London and Manhattan are touted as a “permanent store of value” and can be held indefinitely.  People, including Michael Bloomberg, former mayor of New York, were buying flats in central London for $20 million and expecting an indefinite annual return of 10% per annum. Read here.

The last time I remember such an argument as it applied to assets outside of real estate was in 1999. Serious people discussed the merits of investing in dot-com stock market plays as if the stock prices would continue to grow forever. The buy-and-hold-forever argument was used also in “one decision” companies like Xerox that were flying high during the boom of the late 1960s. Of course there were many instances of that argument being used to justify speculative investments such as tulip bulbs in the early 1700s. I could go on with more examples but the point is made. In the investment world there are no safe investments that can be tucked away forever and forgotten. Today’s hot stock sector or hot real estate play is a precursor to tomorrow’s remorse, regrets and bankruptcies. But while people are in the middle of the hot play they are blind to possibility of the inevitable crash. Just go to Calgary today and ask people about the energy sector boom of 2013!

So when I saw an article yesterday about a possible glut in luxury properties in south London it piqued my interest. Could it be the start of a downturn that would turn the Greater Fool investing program on its head? The article can be found here.

In case there was any doubt about the buyers’ intentions here is one quote from a knowledgeable insider:

According to Google Maps, Battersea (northeast Wandsworth in the map below) is only 27 minutes by train from central London. Prices in Battersea have dropped by 20% and many homes are languishing on the market even a year after completion. Is this the start of the downturn in London real estate that people were beginning to think would never happen? After all, a glut less than 30 minutes from central London means that prices might be dragged lower in the centre, too. 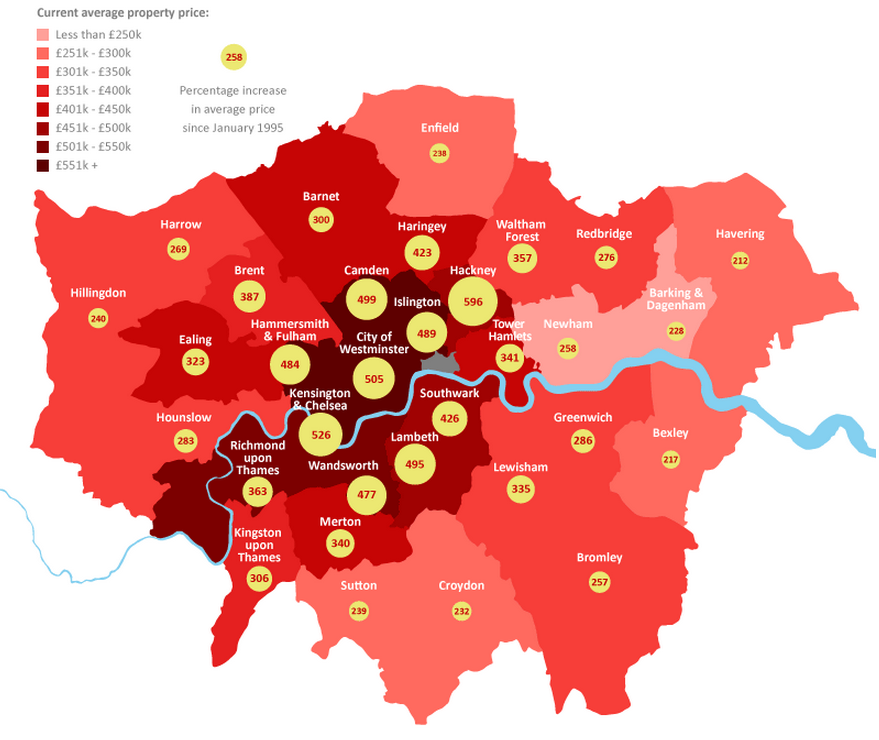 The cost of speculating on a London flat is about 6% per year (4% of foregone investment return and 2% of ownership cost). That cost looms very large when prices are stagnant or falling. Speculators would be wise to get out early, even if it means taking a loss. Sometimes one’s first loss is the best loss.