Farmland price bubble and the CPP

I heard a farmer say last week that everyone is praying for hail. Being a bit slow about rural concerns I asked for clarification. The answer was sobering. “This year’s crop is so bad due to drought; the only way we’ll get any money is from insurance.”

This news comes on the heels of years of rapid gains in the price of farmland. Investors piled into agricultural land as a “store of value” with the highly regarded Canada Pension Plan (CPP) buying thousands of acres of Saskatchewan dirt. In 2014 the CPP bought 115,000 acres for $128 million, paying more than $1,000 per acre on behalf of 18 million Canadians. Full disclosure: Some of my clients owned units in the Assiniboia Farmland LP that sold the land.

Did the CPP buy at the all-time high price?

For the first time in decades, apart from the 2008-09 period, farmland prices are falling. This slump shouldn’t be surprising as agricultural product prices are falling too. Loan demand by US-based farmers is spiking. 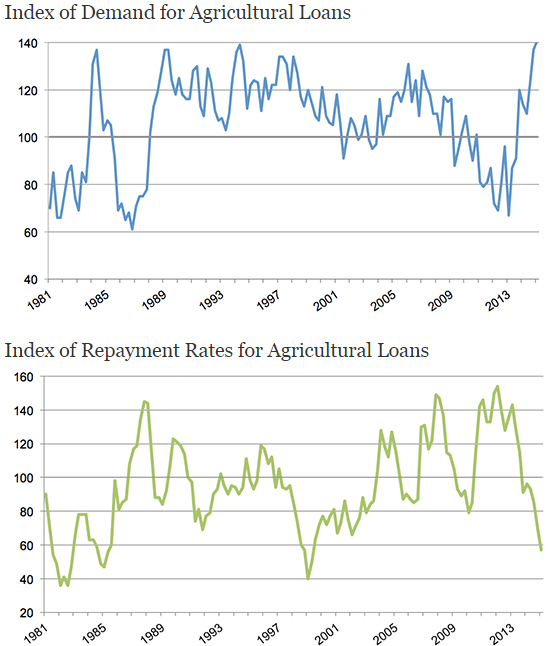 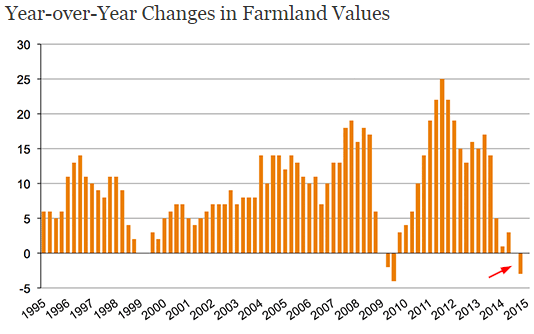 These graphs, with US data, show that farmers have less income to repay loans. The spike in demand for loans isn’t a positive. Farmers had less money saved to begin the crop year. But farmers, being eternal optimists, will still plant a crop.

If there’s a crop failure or if prices drop, the loans get into trouble. Governments step in to help and sometimes there is insurance if there’s been a weather disaster like hail. But these payments are quite small in relation to the amounts needed to repay the loans. Banks will be on the hook for large non-performing loans.

In Canada it’s a similar story. It won’t just be farmers that are affected. All of those speculators and so-called long-term investors that have sunk billions into farmland might soon be wishing they hadn’t. Prices reached levels that are impossible to justify on the basis of farm incomes.

For land close to a major centre that was growing fast like Edmonton, paying inflated prices “might” make sense, assuming that the city eventually grew to encompass that land and suburban housing stayed strong. But for parcels in the middle of Saskatchewan, far from any city, farmland prices weren’t based on wishful thinking about future housing. Investors should have known that Saskatchewan farmland purchase costs had to be recouped by income from agricultural crops like wheat and barley. Those incomes are tough to earn even in good years given crop price cycles, weather risk and rising input costs. In the face of these sobering facts optimistic investors still bid prices higher and higher. 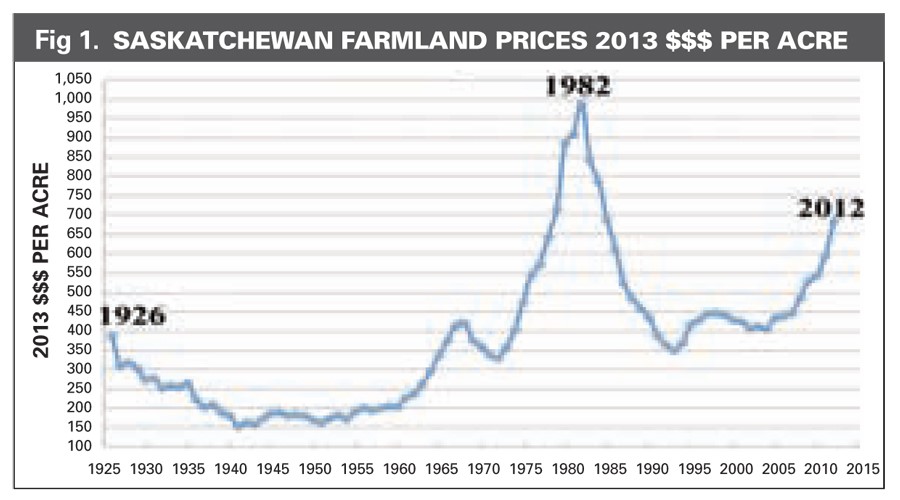 We can see that there was one brief period of similarly high prices in the late 1970s and early 1980s. This price spike happened at a time of double-digit inflation, which explains the mistake that investors made then. But today inflation is practically non-existent.

The price paid by the CPP of more than $1,000 per acre rivals the highest price ever. If this current bubble bursts and prices go back to levels seen in the 1990s there will be massive losses.

This is a classic bubble. Hug a farmer today. And the banker that lent them money. And that Canadian pensioner relying on the CPP. But wait, that might be us!