Canada and the Kiwi Surprise

New Zealand announced an interest rate cut on Thursday that shouldn’t have been a surprise. It’s obvious that New Zealand is very worried about its dependence on exports of agricultural products. The Kiwi economy is tied to the milk industry and a devalued New Zealand dollar helps support milk exports. Other countries with a dependence on exports, like Australia and Canada, are watching closely.

Opinions vary regarding what will happen in Canada but some economists believe that another rate cut is coming here, too. The Bank of Canada surprised the market in January with a rate cut, calling it “insurance” against “atrocious” economic performance. The central bankers are desperate for a lower Canadian dollar to boost exports and support economic growth. If Canada tries to weaken its currency further with lower interest rates, the start of the much-needed period of deleveraging and debt reduction might be delayed. But deleveraging will start soon and that will be a big change. For Canada, unlike New Zealand, there are some encouraging developments, too. 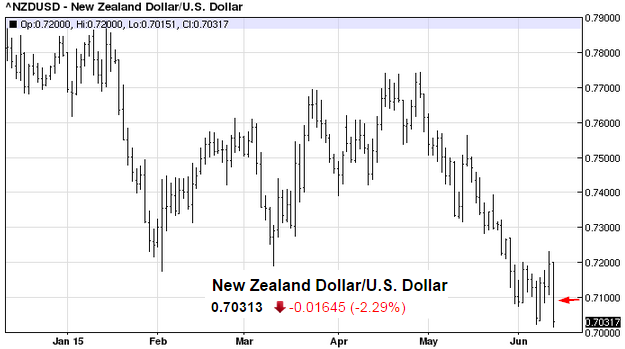 Courtesy of the Daily Shot.

The Bank of Canada might decide to take the same route as the Kiwis as the problem is similar although the commodity mix is different. In Canada, just as the commodity supercycle has ended, with a plunge in prices for crude oil, iron ore, copper and other commodities, the debt supercycle peak looms. As the analysts at BCA Research point out in a recent report titled “Stay level-headed about global growth” (June 2015), the start of the deleveraging process has barely begun in Canada (and Australia), two of the most commodity-oriented economies in the world. A country with less exposure to commodities and international trade —the USA — is about seven years into their deleveraging period. Economists estimate that a decade of debt reduction is required before the cycle can restart. Canadians are lucky that Americans are on a different timetable and closer to end of its debt reduction.

The Canadian debt bubble is bigger, especially at the household level, and the unwinding process will be more painful. If household debt reduction finally begins as the commodity supercycle continues to wind down there will be a slowdown in growth for Canada. Imagine two of the largest components of GDP — real estate and resource extraction — going into a contraction simultaneously.

Canada has been very fortunate since the 1990s with better growth than other developed countries. But now it’s Canada’s turn to struggle while the others move ahead faster. Here is the BCA chart that shows credit growth slowing and forecasts negative growth starting in 2015 and reaching a maximum of -3% of GDP in 2016. Expect the Bank of Canada to try everything to soften the impact of this contraction in spending and debt accumulation.

There is a spot of good news: the US economy is closer to the end of its period of financial deleveraging. Even though the US consumer is still saving more money than before the global financial crisis the recent rate of change in spending is positive. So the net impact is a plus for the economy, and for some Canadian exports to the US. For example, lumber is moving up in price and volume with exports going to build houses in the US, one of the industries that is most sensitive to credit expansion and contraction. And there’s room to increase housing construction in the US as pace of building is only about one half of the pre-crisis peak. US auto sales have picked up so Ontario’s exports of auto parts are rebounding. So while Canada goes through a painful rebalancing of household debt the US will provide a positive force for the Canadian economy, especially in the more populated provinces like Ontario, Quebec and British Columbia.