Is a “clean energy” wave about to hit the pension investment world?

Bloomberg ran a story yesterday about Santander (Spain’s large, international bank) and two Canadian pension plans forming a US$2 billion fund to invest in low-carbon and water investments. Cubico Sustainable Investments, based in London England, will invest in “renewable and water infrastructure developments that require decisive long-term investment and commitment”.

Will the increased number of investment vehicles with billions of dollars looking for non-carbon based investments boost market values in “clean energy” investments?

The elevated growth in investment commitments anticipated in wind, solar and other forms of clean energy caught my attention a couple of years ago. Since then I’ve noticed that the pace of change is increasing. With more money looking to invest, the surprise of 2015 and 2016 might be the rapid growth in investments and installations in this growing sector.

For example, the US has a federal government production-tax-credit (PTC) that provides an incentive (2.3 cents per kilowatt hour for ten years) to invest in wind, geothermal and biomass energy production. The PTC expires this year, unless extended — it’s been extended once already. The cost of wind production of electricity has declined by 40% over three years. Solar energy costs are down by even larger amounts as the cost of producing panels declined by as much as 90% and their efficiency has improved.

But even without the PTC, pension plan investment committees will feel pressure to divest of carbon-based energy investments, especially coal, as confirmed by these two large Canadian pension plans. There will be a sizeable shift of investment dollars away from carbon and into wind and solar.  See article here.

Cubico’s current portfolio consists of 19 wind, solar and water facilities with expectations of further investments in offshore wind. None of Cubico’s facilities are in the US or Asia at the moment.

The big picture for alternative energy and traditional electricity sources in the US looks like this for the next year. 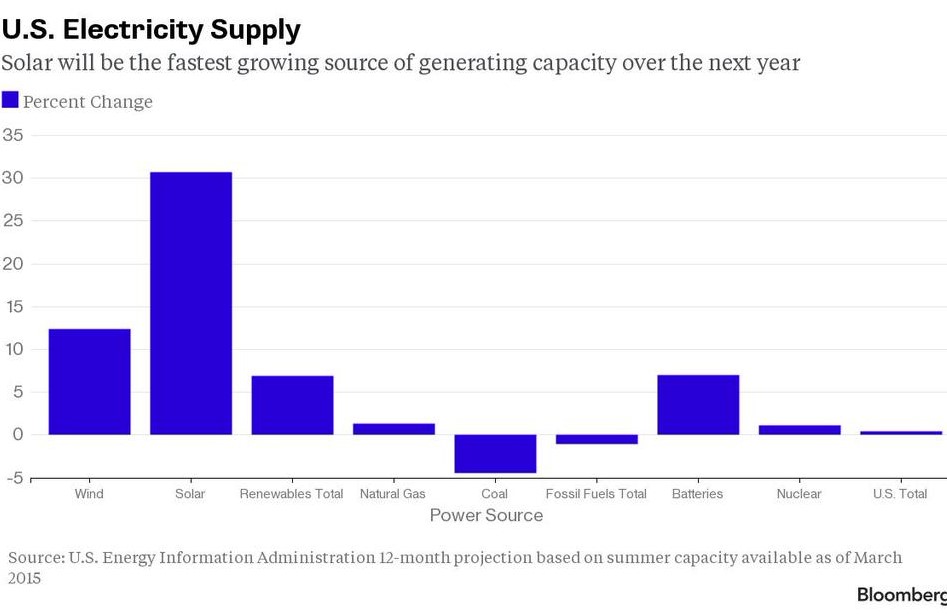 Chart courtesy of “The Daily Shot” and Bloomberg LLP.

And the US, though behind Europe and Africa, is starting to catch up, according to Vestas Wind Systems, the large Danish-based manufacturer of wind assemblies.

Vestas expects that the US will grow at 26% this year. Wind, especially offshore wind, requires large up-front investments but the ongoing expenses are low as there are, obviously, no fuel costs. Vestas investor presentation for 2014 can be found here.

Vestas points out that the OECD countries still account for significant demand for alternative energy sources because of as shift away from carbon and retirement of oil, gas and coal-fired plants. New energy demand growth outside of the OECD will be in India, Southeast Asia, the Middle East, Africa and Latin America primarily.

On page 27 of the presentation Vestas shows that “new” wind is cost-competitive with coal and natural gas. The US and Canada might adopt a carbon tax, as has been suggested by Suncor’s CEO - see link to CBC story here.

If that happens, depending on the price set for carbon, wind and solar will gain a substantial improvement in relative cost advantage.

Our Global Model Portfolio current holds three companies or more than 10% of the number of holdings in the “clean energy” space. No investor can afford to ignore this area, as the pace of change is increasing.