Is China heading for an economic downturn?

In “When the Bubble Bursts” I describe how the Canadian economy is tied more closely to China’s economic activity than most realize. As “buyer of last resort” of commodities such as copper, coal and iron ore, China helps determine the “terms of trade” for much of Canada’s exports. If China is headed for an economic crash, the world needs to take heed. Canadians in particular depend on exports and trade for a large portion of their jobs, income and future wellbeing. And now there is a catalyst that could trigger a contraction.

The potential difficulty rests primarily with local governments as the central authority in Beijing is flush with US$4 trillion of foreign reserves. However, economic growth has depended on local governments providing land to developers with government-controlled banks providing loans to finance projects, often residential housing and apartments. Rapidly rising property prices allowed the authorities and their favourite developers to expand while amassing large amounts of debt. Other favourite activities included building gigantic infrastructure projects such as highways, airports and steel mills, building them long before actual demand required it.

Developers paid the local governments for the use of the land, using bank loans from state-owned banks. This debt is backed by land so land prices must stay high for this circular financing chain to continue. Local governments are not allowed to borrow money or to levy property taxes so they use shell companies known as Local Government Financing Vehicles or LGFVs. This activity is problematic because it depends too much on land and debt.  The net result: an immense amount of debt, rising with breathtaking speed. Even Beijing doesn’t know the full amount of the exposure but China’s total debt as measured by McKinsey is 258% GDP. As noted, the best predictor of a financial crisis is a rapid increase in debt.

While many observers have expected a crisis for years, there haven’t been any major failures, yet. Perhaps that’s not surprising since most of the lenders involved are controlled by the central government and Beijing will continue to provide funds, even if the borrowers are unable to repay their debts.

But as can be seen in a recent summary of conditions, it seems that change might be at hand. 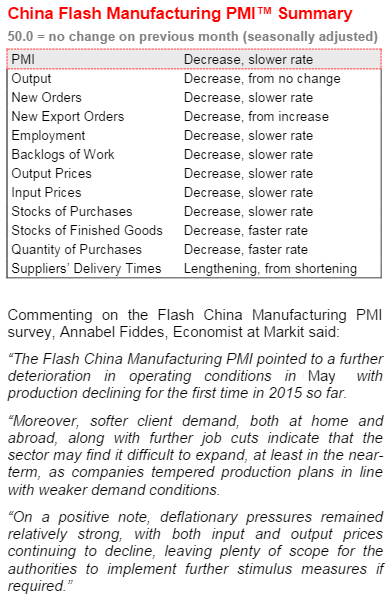 Courtesy of The Daily Shot and HSBC/Markit

As the Foreign Affairs article points out, land prices are flat or falling in many parts of China. A 30% decline in volume and proceeds signals a potential turning point. And an excess of housing hints that conditions might worsen. There are about 75 billion square feet of surplus space looming over the Chinese property market, a five-year supply at normal absorption rates. What does this mean for Canada?

At a conference in 2010 I heard a US-based investment strategist state that “Canada’s market is just a play on China.” He went on to explain that commodity prices are very important to Canada and China’s demand for commodities, especially related to the construction sector, creates upward pricing pressure. Commodities such as copper and nickel, widely used in the construction industry, depend on China’s demand.

When I investigated further I found that China’s residential construction industry contributed 15% of its GDP, which compares to the US today at 3%. Canada has been at 7% for several years in the midst of a housing boom. China’s economy is unusually dependent on a building boom and land speculation and the impact of a correction in that sector would be felt worldwide.

Canadians who want to know what’s coming next in their economy should watch China closely for the next few months.