The explosion in student debt in the US; it matters a lot

Due to a flawed system of federal government guarantees of student loans, similar to what happened in the housing industry, lenders increased the amount of debt exponentially since 2002 and former students are starting their working lives deep in a hole, weighed down by a burden of crushing debt.

This matters to everyone and is a problem that won’t just go away...

As can be seen from this Bloomberg chart courtesy of David Wilson, the amount of student loan debt outstanding has increased exponentially. Not only is the total almost US$1.2 trillion but the debt is more than ten percent of the total consumer debt outstanding. This matters to all of us as millennials are the ones that we are counting on to buy our houses when it’s time to downsize and to continue to support our consumer economy. Their taxes and employment income will go to fund support programs in healthcare and other services that the baby boomers will tap into more and more as they move into their 70s and 80s. If all these thirty-year-olds are completely tapped out because of debt from their education, we will all suffer.

I can hear the “tea party” people already complaining that any bailout of this group is unfair, and perhaps it is. But we saw what happened to the economy when the government failed to address the problem of people losing their houses to foreclosure and instead decided to bail out the banks, the very institutions that helped create the excess debt. At heart of the moral hazard argument is the valid concern that people, if they are let off the hook for their debts, will just carry on with irresponsible behavior and will have to be bailed out again. As with Germany and Greece there is also an element that sees failure to pay debts as sinful. That’s an interesting argument when it comes to student loans since a visit to any campus will show how many lenders are actively promoting the idea that students should borrow more money. Is it a sin to borrow and not repay but not wrong to lend too much money to the young and vulnerable? 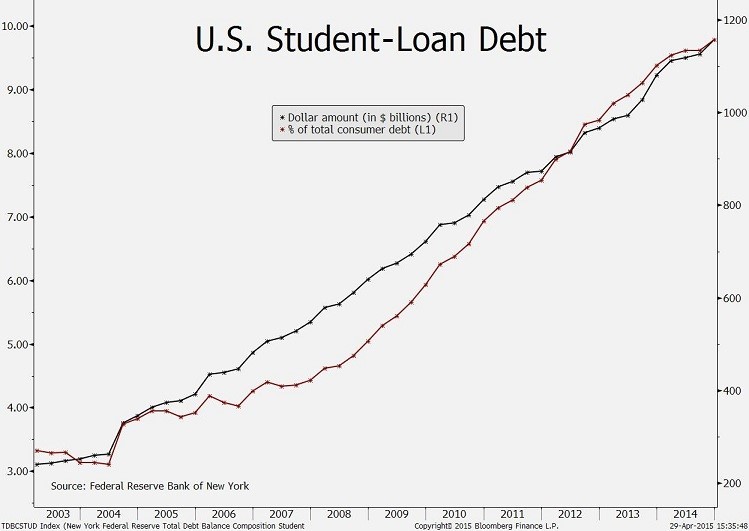 In any case without help from governments in Canada and the US this problem will impact the economy for years. What is needed at the very least is an increase in incomes for the group aged 25-34 as working at Starbucks isn’t going to be enough to pay off the loans and to start raising a family.

The wealthier families with a “Bank of Mom and Dad” will be able to help their offspring to overcome this obstacle. And those young people will be more likely to find higher paying jobs too. But it is the students without a family that can help that will need more assistance and we would be wise to consider helping them or we will have to live with a subpar economy for a long time.