Another Eurozone Crisis over Greece?

The possibility reappeared recently that Greece might be forced to exit the Eurozone and the Euro, especially as a deadline arrives for repayment of loans and the extension of the final tranche of loan assistance to Greece. Or the Greeks themselves might decide to leave and declare a default, reviving their old currency, the Drachma.  Could it really happen? What is the most likely outcome as an April 24 deadline for repayment comes closer?

Today the concern about Greece is their agreement to and implementation of a package of reforms and the extension of the “final” tranche of funding, about 7 billion Euro. If Germany agrees that the Eurogroup can provide this next round of funding and allows Greece’s government to fail to implement the full slate of reforms that were promised, the rest of the Eurozone countries will look at that precedent and line up to get a better deal in Brussels and Frankfurt. And the market reaction could force both lenders and borrowers to make some difficult decisions very soon.

The rapid movement of interest rates from 10% to higher than 20% in just three months shows that the market expects Greece to default on its loans. 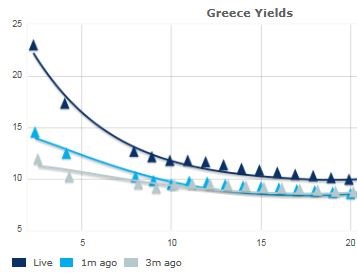 According to the New York Times, April 6, Greek banks are finding sources of funding in odd places:

“In the last four months, some of Greece’s largest banks, including Piraeus, Alpha and Eurobank — have self-issued more than 13 billion euros’ worth, or $14.3 billion, of these government-guaranteed bonds.”

Usually borrowing money from one’s self is a last-ditch effort to save a sinking ship.

So why doesn’t German Chancellor Angela Merkel just agree to the loans? There are some big obstacles for the Chancellor:

First, the German voters pride themselves on their frugality, forgetting that Germany was the first country to violate the terms of the Maastricht Treaty (1992) by exceeding the allowable government deficit as a percent of GDP. And German voters fail to acknowledge that their export-driven economy benefited greatly from the new buying power unleashed when countries like Greece, Spain and Portugal joined the Euro. And, as a Greek leader spoke about in a March 10 speech, the German Nazi government occupied Greece with brutal force from 1941 to 1944. A reparation was imposed on Germany at the end of the war but Greece received only 7% of the awarded compensation. So the Greeks might have a legitimate claim that the debt is still outstanding, about 11 billion Euro.

Second, German leaders are concerned that bending the rules for Greece will lead to a lack of will to press ahead with much-needed reform in the Greek government bureaucracy and rules for the economy, where structural change is needed. So holding the Greek government’s feet to the fire for as long as possible is a purposeful strategy designed to get results.

And third, most Eurozone countries are in breach of the rules, including Germany: 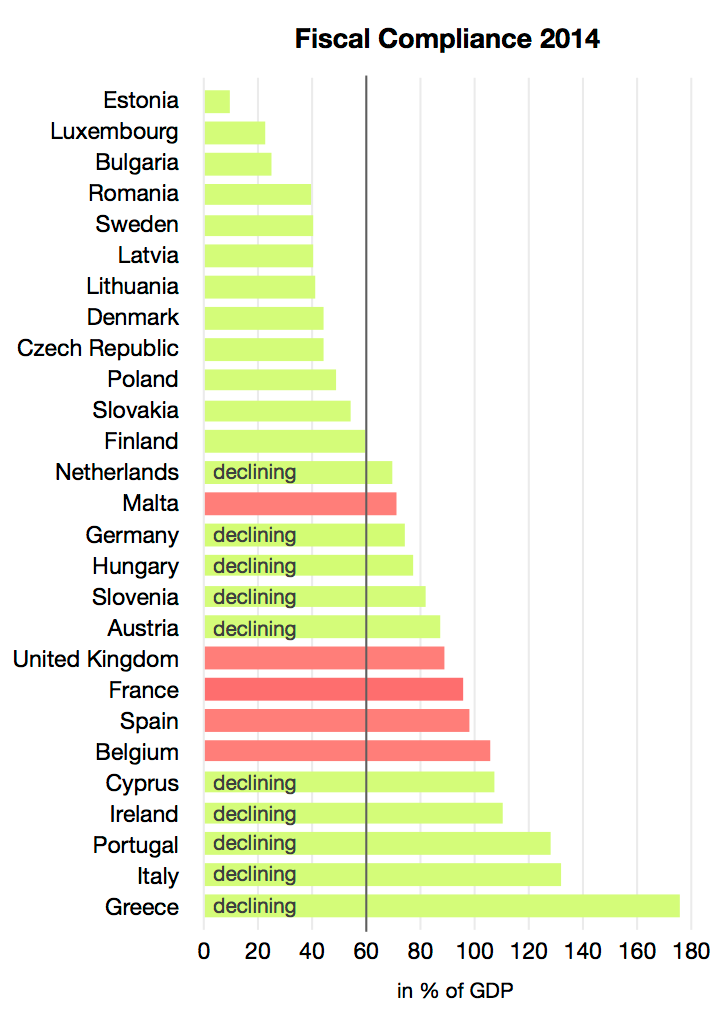 So although Greece is at the bottom, all of the large countries in the Eurozone are in breach of the 1999 agreement that limits government debt to GDP to 60 percent.

The Eurozone experiment, as it must be viewed given its short history, must not be held hostage by the views of just one government, even one as powerful as Germany. It must be a cooperative effort of all nineteen members.

So the most likely outcome is another agreement that “kicks the can down the road.” And perhaps this time the incipient recovery in the Eurozone economy will make Greece’s problems more manageable. The big surprise in 2015 just might be a much better-performing Eurozone economy and a diminished concern about the possibility of a messy dismantling of the ties between Greece and the rest of Europe. What a surprise that would be.