The QE trap: What will happen in the “great unwind” from the most radical policy experiment ever tried?

Economist Richard C. Koo of Tokyo-based Nomura Research Institute has a new book called Escape from the Balance Sheet Recession and the QE Trap. The book is technical but I will try to uncover the essence of what Koo says. It matters a great deal to Canadians and Americans who’ve gotten used to interest rates that are close to zero and have been borrowing as if interest rates will never rise.

Eventually rates must go higher, unless the economy stays in its slump forever. What happens then?

I listened to Richard Koo speak in New York at a 2012 conference. He argued that the US government must spend more money, as it alone had the power to borrow and spend, a necessary ingredient to generate a decent recovery and get the inflation rate to move higher. When asked what happens if the US government didn’t want to do that, or it couldn’t because of a political aversion to “borrow and spend”, his tone became very somber and he warned that government must spend more if the private sector tries to pay down debt. Of course now we know that what Koo insisted must happen never did as it was thwarted by political realities.

President Obama, under pressure from Republicans and Congress, has been shrinking the size of government as he spends less money on programs and stays out of regime-changing wars, unlike his predecessor. In fact Obama is the first president since before World War II to actually shrink the size of government. As a result of this conservative approach to spending, the US federal government deficit is shrinking very quickly which reduces the overall demand in the economy.

According to Koo’s argument presented that day, if the government doesn’t pick up the slack created by weak demand from the private sector, economic activity will contract and a depression similar to the 1930s could appear. I don’t think he convinced many people that day but I was intrigued and went home to read his earlier book, The Holy Grail of Macroeconomics: Lessons from Japan’s Great Recession: John Wiley and Sons, 2008. His main argument: when heavily indebted private sector borrowers get afraid of holding too much debt there is no interest rate - even zero - that will induce them to borrow money and go deeper into debt. All they will do is pay down debt. This is what he calls a “balance sheet recession”; what Japan went through for twenty years and what Koo argues Europe is at risk for now.

What happened instead between 2012 and 2015 is a radical and risky monetary policy experiment known as QE3, carried out by the US Federal Reserve. This was done because the federal government couldn’t or wouldn’t spend more money to get the economy moving again.

So that brings us to March 2015. The US Federal Reserve is trying to withdraw the QE monetary stimulus while the Obama government is still shrinking government spending at the same time. The private sector is starting to spend a bit more but is still reluctant to borrow more money as the recovery is tepid. And that could be a big problem.

When Ben Bernanke, then governor of the Federal Reserve, tried to withdraw QE2 in 2013 bond markets threw a tantrum and longer-term interest rates rose. The Fed quickly reversed direction and announced a new QE, an even more aggressive version that just ended in October 2014. As a result now the markets are in uncharted waters. As Koo explains, “…while implementing QE produced only minimal benefits …winding down QE could entail serious risks… for the global economy.” He calls this the QE Trap.

To unwind QE the central bank will have to sell long-term securities that were purchased during all the rounds of QE. There are about $4 trillion worth, an excess of more than $3 trillion. If those bonds are sold, it will drive up US interest rates. As investors try to get ahead of this trend, they are moving their funds into the US dollar to take advantage of the safety and the yield. But what does that do for the dollar?

Warning: this is a scary picture that is not suitable for all audiences!

Have a look at the rapid rise in the US dollar as the markets prepare for the imminent tightening of monetary policy, while the US government is restricting spending. It’s a terrifying sight for borrowers in emerging markets such as Russia, Brazil and countless others.

While this might be a good thing for people holding assets in US dollars and who carry little debt, this rapid increase in the value of the world’s reserve currency is bound to push some people and even some countries into deep trouble, especially those who borrowed in US dollars. Their debts increase in tandem with the rising dollar.

The next few months will tell if Richard Koo is right and if the US government has made a serious miscalculation. Get ready for QE4? 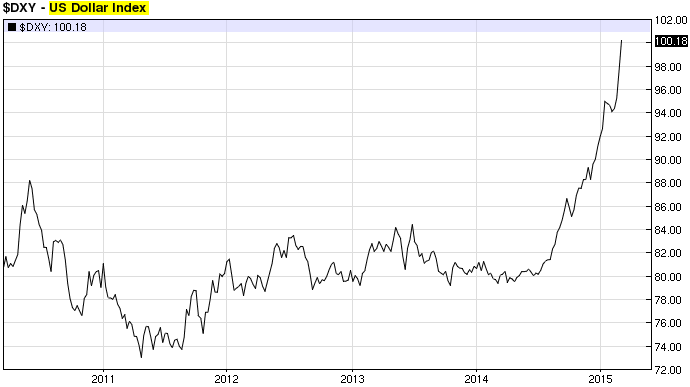 Chart courtesy of The Daily Shot.