Canada's central bank downplays the risks of a financial crisis

And rising interest rates could force large numbers of mortgage borrowers into default, which could create a financial crisis.

But the Bank of Canada is not worried.

Bank of Canada staff have written two papers in the last three years on the resilience of the Canadian banks and the financial system.

Canadian banks have a reputation for prudent lending and strong balance sheets. This reputation grew even stronger after the Global Financial Crisis in 2008-09. Canada emerged unscathed, in sharp contrast to the US, the UK, Spain and many other countries where a banking crisis caused major turmoil in the financial markets.

The first BOC paper emerged in 2019 and the second in June of 2022. The BOC staff ran a simulation using some dire assumptions for a severe economic downturn that would impact the banking sector.

In 2019 the BOC showed these assumptions, which appear to be based on the severity of the 2009 downturn in the US: 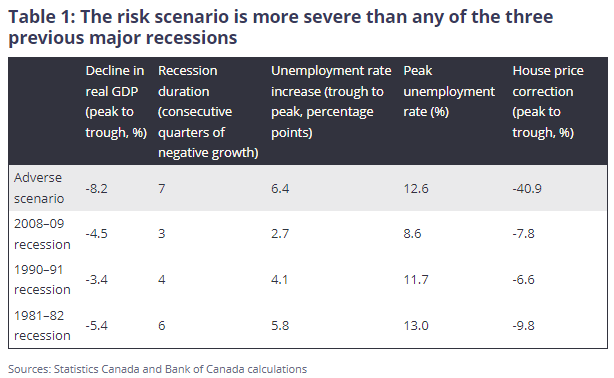 The house price correction outlined at 40.9% would be called a “crash” in most circles. The downturn in the US for house price decline from 2006 to 2010 was 38 percent.

The most recent paper, in June 2022 outlined new assumptions for a severe downturn: 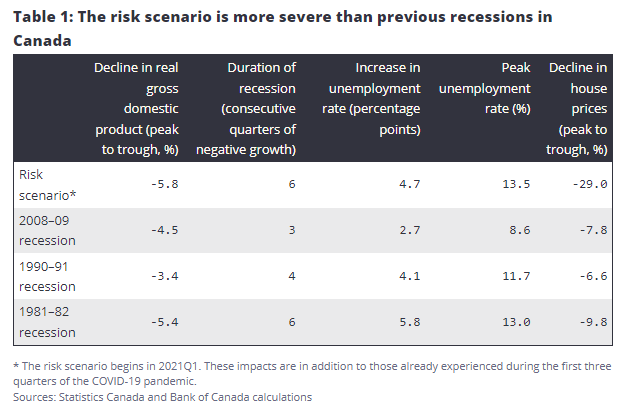 The risk assessment seems less severe in the most recent report compared to 2019, despite an increase in all three categories of government, household and corporate debt.

The most interesting change is the moderation in the house price decline from 40.9 percent in 2019 to 29 percent in 2022. I would think that the change should be in the other direction, to a higher risk scenario as house prices are much higher in 2022 than in 2019 which would suggest a strong likelihood of a much larger correction. The bigger the bubble, the bigger the fallout when the bubble bursts, is the usual rule of thumb.

Here is our bubble chart, which we publish monthly:

Both household debt (red line) and house prices increased substantially between May 2019 and May 2022. So, it would be normal to think that risks have gone up and we would expect a larger decline in house prices, not a smaller correction.

In 2019 the credit loss estimate for the banks is:

The cumulative credit losses incurred over the three-year scenario are estimated at $116 billion, or about 4 per cent of initial loan balanced – somewhat higher than the loss rates experienced by Canadian banks during four historical periods of high credit loss that have occurred since the 1980s.

And in 2022 there is a slight increase in credit loss estimates from 4% to 4.4% and the dollar amounts goes up by 7 billion dollars to $123 billion.

In both papers the BOC assumes there will be minimal losses on mortgages, the biggest loan category for Canadian banks.

The BOC conclusion is that a severe downturn will not trigger a financial crisis, as long as there are no defaults on mortgages.