Tesla reports another record quarter of production but there are hints of some bumps in the road ahead.

The company is generating huge amounts of free cash flow, even while building out two new factories.

But a weak stock market and looming recession could affect Tesla.

In full disclosure I have owned and driven a Tesla Model S since 2016. My current model is a black 2021 Plaid.

I have owned shares of Tesla for most of the last six years but sold my shares in two batches in 2021. I am waiting for a good entry point to become a shareholder again.

Tesla is not immune to the current bear market in stocks, caused, among other things, by rising interest rates. As long as central bankers must raise rates to fight inflation, the risk of a recession looms large and stock prices will struggle.

On the positive side for Tesla, on a longer-term basis, there is growing sales momentum with increased consumer interest in switching to electric vehicles. Since there are a total of one billion ICE vehicles on the road in the world, and more than 300 million in the US alone, the market opportunity for makers of electric vehicles is huge and will be for decades to come. And Tesla is the leader. New opportunities with light trucks, which are not available yet, could drive US sales much higher for both Tesla and Ford.

The most recent quarterly report was released October 19. You can access the 29-page report here.

The numbers were excellent: 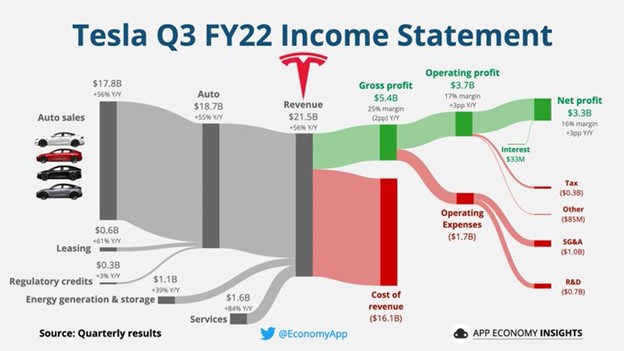 Tesla is currently able to produce vehicles at the rate of about 2 million per year, but plans are to grow production capacity by 50 percent annually. New plants will be announced soon, perhaps in Mexico and Canada and elsewhere. The Cybertruck and the Semi rollouts are imminent.

The goal of 50 percent annual increase in production and sales is aggressive. Tesla restated that goal in the recent report. If that pace is maintained to 2027, production would be about 15 million vehicles, which means adding more than ten new factories in less than five years.

A hint of a bump in the road appeared October 24, 2022, when Tesla announced a reduction in the selling price of some vehicles in China. Is that a sign of weak demand? With very high gross margins Tesla has room to reduce prices, but it will be impossible to increase production as planned, if demand slows during a recession.