China is going through a rough patch with weak growth

China probably slipped into a recession recently. On October 18, 2022, data that were expected for third quarter GDP failed to appear. Websites stated that the information was delayed.

China matters to everyone on earth as the second largest economy in the world. But there are signs of trouble.

Should we worry about China?

As the Chinese Communist Party met to reconfirm Xi Jinping’s leadership for an unprecedented third term of five years signs of trouble in China are piling up.

The delay in the economic data was probably done to avoid providing a weak number in the middle of the five-year conference. The expected growth was about 3 percent while the growth target for 2022 is 5.5 percent.  Any number that is very weak would be an embarrassment to China’s leadership. 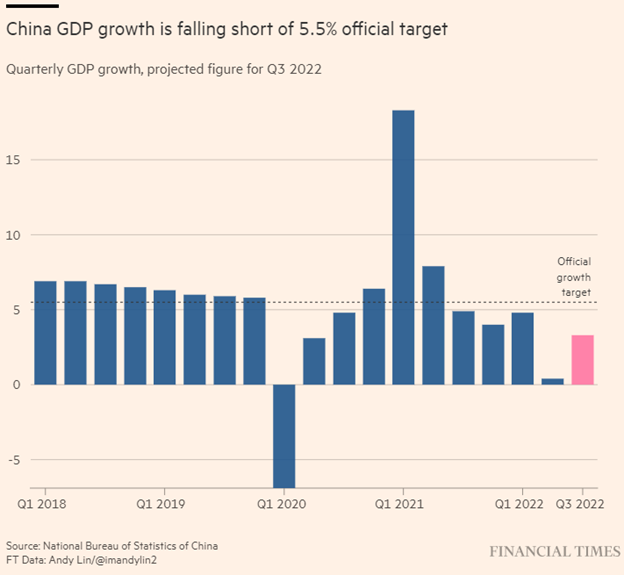 In addition to a weak economy, although we do not know exactly how weak, there have been serious problems in the key real estate sector. Local governments, who rely on selling land for real estate projects to developers, are desperate for more projects to start. But developers are squeezed for cash and unable to finish many of the projects that have been pre-sold. Buyers in those projects have started to boycott monthly payments on the mortgages they took out to buy the units.

The zero-Covid policy that means frequent Draconian lock downs in major cities has been hurting production and morale. The cities that are in the medium and high-risk category for Covid are responsible for 40 percent of GDP, according to Goldman Sachs.

On Friday October 15, 2022, data for house prices was also delayed. In some parts of China, it is illegal for developers to lower house prices, so inventory sits with no buyers as everyone is aware that prices are falling, even if those changes are not officially recognized.

Local government finance vehicles are in difficulty with defaults looming. These entities financed the building of roads, railways, power plants, airports, theme parks and other infrastructure but if the authorities default on the bonds funding will stop.  According to the Financial Times these loans are half the size of China’s GDP or twice the size of the German economy.

According to one expert quoted in the Financial Times:

“China’s growth model has run its course,” says Chen Zhiwu, professor of finance at the University of Hong Kong. He adds that in the past few years, Beijing has tried to stretch the booms in property and infrastructure in order to prolong investment-led growth. “But now, all these drivers have little space left, if any at all.”

But China has a leadership role in many areas, such as renewable energy, and in manufacturing.

Xi Jinping could have a very tough third term. But China will not fail, and it could emerge even stronger after this change in growth trajectory.