OPEC cuts oil production by another 2 million barrels per day, adding to upward pressure on the crude oil price.

Will OPEC keep control of the market for crude?

OPEC+ refers to the OPEC members plus other large producers who are not members of the cartel but are cooperating to a degree. Russia is the largest producer among the non-OPEC members with about 11 million barrels per day of production.

The United States is a major producer, with the largest production of crude oil in the world at about 11-12 million barrels. Russia and Saudi Arabia produce about the same amount, giving those three countries about 35 percent of the 99-100 million barrels per day of total production.

The price of crude oil has declined more than 30% from its peak earlier this year. OPEC+ controls about 50 percent of total production but small cuts like this probably will have only a small impact on the demand/supply balance.

But if crude prices rise a lot, people might speed up their adoption of all-electric vehicles. For example, the US uses about 20 million barrels per day and 45 percent (9 million) goes into light cars and trucks. Most of that energy is wasted in production of heat, with only about 30 percent of energy in the crude oil used to move the vehicles.

US sanctions on Russian oil have made some impact on world markets. But Russian oil is easily moved to other countries who have not joined the efforts to sanction Russia, such as China and India.

US producers of oil are some of the biggest beneficiaries of the high prices and restriction of Russian exports. US oil exports hit a record of 5 million barrels per day recently. The spread between the European price (Brent) and the US price (WTI) is about $6, which encourages exports from the US to Europe.

In the chart, US production is in blue and OPEC is green. 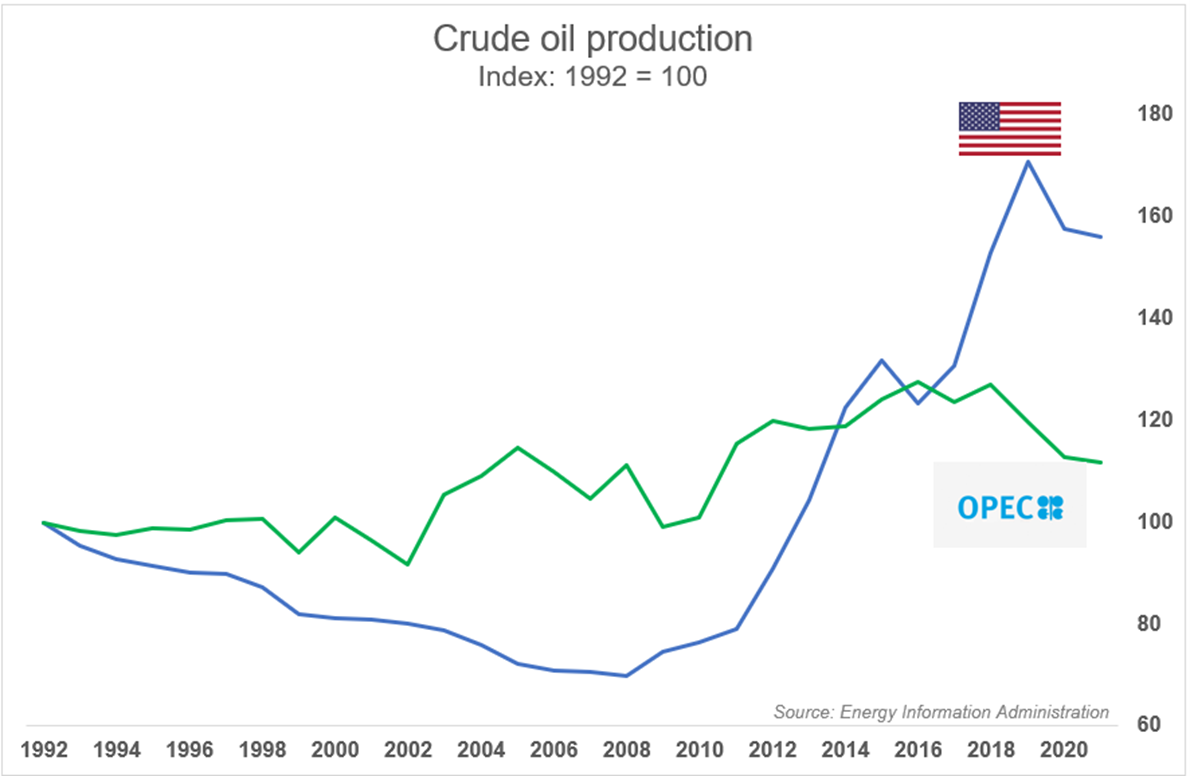 China is the second biggest user of oil at 15 million barrels but has more than triple the US population. The EU takes 8 million barrels, less than ½ of the US share though the US and the Euro area are similar in population.

OPEC would love to put a floor of $90 or higher under the oil price by cutting production. But sanctions against Russia and Iran will eventually be lifted and new sources of oil will be found, perhaps in the US.

OPEC has lost market share in the last decade going from 40 percent to 33 percent of sales. The big winner has been US shale production, with most of the 30 percent increase coming from the West Texas Permian Basin.

OPEC will continue to lose power in the crude oil market and its medium-term future is looking shaky as other producers grow production while crude oil demand sags as electric-powered vehicles become more common.