The U.S. CPI for August shocked the markets this week, leading to an almost 4 percent decline in stock markets. The CPI showed a small decline, but the “core” CPI increased.

Will inflation persist at these high levels?

The market was expecting a moderation in the inflation number but got a shocking increase in some components of CPI. While the headline number showed a slight increase month-over-month, the 12-month number dipped from 8.5 percent for July 2022 to 8.3 percent in August. The next report will be out on October 13.

The Federal Reserve meets next week and will announce another increase in the official rate of interest. The Fed may decide to give the market a jolt by increasing by 100 bps, but the consensus is for an increase of 75 bps. (100 basis points equals 1 percent). Canada will follow with a large increase as well at the next meeting of the Bank of Canada which is not scheduled until October 26. Canada’s CPI is out on Tuesday September 20. The Bank of Canada officials, including Tiff Macklem, Governor will be speaking on September 20 (the Deputy Governor) and October 6 (Tiff Macklem).

The market will try to guess from Canadian BOC officials’ speeches if they are planning a large hike in late October, but it’s a safe bet that there will be one, especially if the CPI next week shows another large increase.

Why was the market surprised by the US CPI this week?

The market tends to focus on food and energy, and energy prices have been coming down for several weeks now.  Energy had been growing at 40 percent year-over-year and that pace of price increase has slowed to about 25 percent. The month-over-month numbers have been in the negative for several months now.

Food is still getting more expensive at the rate of 11.4 percent and shows little sign of leveling off.

But the big problem, as has been highlighted in this space several times, is the cost of shelter. This measure was up 6.2 percent year-over-year and was higher month-over-month also. 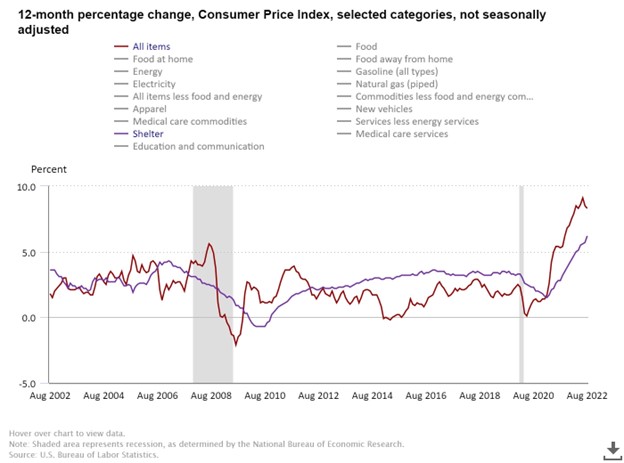 The cost of shelter is weighted heavily in CPI at 32 percent and “core CPI”, at 40 percent.

“Owners’ equivalent rent”, or OER, which is the way that CPI measures shelter costs for homeowners, was at 0.7 percent for the month. This is the highest rate of increase in a least two decades.

The cost of “rent of shelter” (for renters) was also 0.7 percent, or 8.4 percent annualized.

With new highs in shelter cost increases there is little chance that inflation will moderate soon. The OER excludes house prices but does include components like the mortgage interest rate. Obviously with rates rising and more rate hikes coming, mortgage rates are going higher and the cost of shelter for homeowners will continue to rise long after food and energy have peaked.

The market is finally waking up to the true nature of inflation, as it is measured officially.