The Bank of Canada says full speed ahead

The Bank of Canada increased its policy rate by 75 basis points on Wednesday. It also stated that the fight to contain inflation is likely to last for some time.

You could imagine them saying, “damn the torpedoes, full speed, go ahead.”

How much pain will higher rates cause?

The Governing Council of the Bank of Canada has taken a firm stance in the fight against high inflation. Even in the face of declining real estate prices and worries about recession the BOC stuck to its stated path of continuing to raise rates until inflation is under control.

You can read the short press release here.

Here is an excerpt that gives a sense that the central bank is in no mood to back off from its stated course to higher rates. The BOC is not finished tightening financial conditions yet.

“Given the outlook for inflation, the Governing Council still judges that the policy interest rate will need to rise further. Quantitative tightening is complementing increases in the policy rate. As the effects of tighter monetary policy work through the economy, we will be assessing how much higher interest rates need to go to return inflation to target. The Governing Council remains resolute in its commitment to price stability and will continue to take action as required to achieve the 2% inflation target.”

Here’s what the BOC says about expectations:

The problem with this policy is that Canada has one of the biggest private sector debt problems in the world. Even before the pandemic Canadian household and corporate debt was leading the world. And when the pandemic hit in early 2020 the government responded aggressively by pumping even more money into the system causing a sharp increase in debt in all sectors, government, household and corporate. Compared to most other developed countries Canada went much deeper into debt in all three sectors. 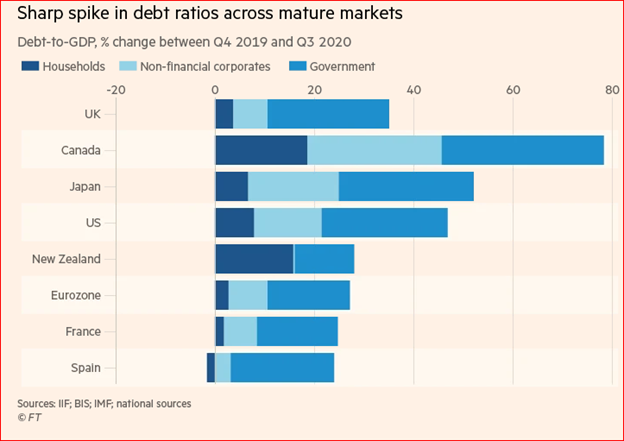 The oft-repeated theme during and after the pandemic was “households have built up massive amounts of savings”. This is completely misleading. The temporary cash surplus was minor compared to the buildup of debt over the years and was due to a temporary halt in spending on restaurants and travel.

Now that Canadians are trying to spend again and finding that prices are much higher than before for airline tickets, restaurants, gasoline, food and many other goods and services, they are finding it difficult to do what they want to do.

And, on top of that, the BOC is increasing the rate of interest on their debt. For some they may not see the impact right away, but for many, especially those with variable rate mortgages, the impact will be swift and harsh.

It’s time to brace for impact.