Junk bond prices have collapsed, losing more than 15 percent of their value this year.

But the push to higher rates by central banks and the possibility of a deep recession point to a much deeper adjustment during 2023.

This will create some great opportunities for stock and bond investors. 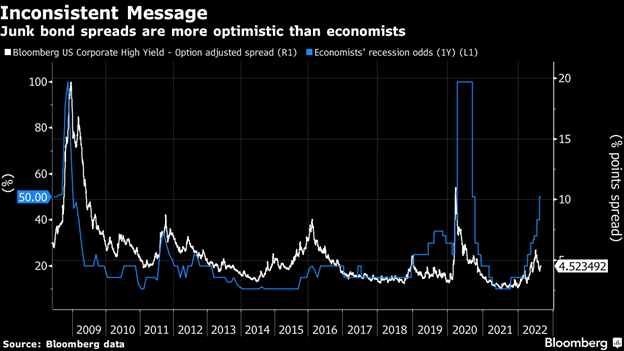 This chart shows how junk bonds have performed over the last 15 years. The measure is the spread between government bonds and high yield bonds.

The risk in junk is probably greater than it has been for at least 12 years, if not longer. And great risk will bring wonderful opportunities, eventually.

The current yield spread on junk over safe assets is still too low — at about 4.5% — compared to the peak of past crises when a 10% spread over government bonds signaled an attractive balance between risk and reward.

At the current spread the junk bond market is too optimistic.

Were there some opportunities during past recessions in the junk bond market?

At the end of the Global Financial Crisis in spring 2009 the junk bond market opened its arms to companies that were on the brink of default, as investors were willing to take on more risk.

For example, a Canadian resource company called Teck was struggling in early 2009 after acquiring expensive metallurgical coal assets. Teck’s stock price plunged below $3 in early 2009 and by December 2010 the price touched $61.83, an all-time high.

How risky was Teck when the junk bond market came to its rescue?

In the summer of 2008 Teck made a poorly timed purchase of a key asset, 60 percent of the Fording Coal/Elk Valley Coal Partnership for US$10 billion. Assets at 2008 year-end were US$27 billion. Debt totaled about $12 billion and net earnings for 2008 were about $700 million.

At 10% interest the total debt would cost about $1.2 billion, substantially higher than net earnings. So, Teck was on the brink of default if they could not find lenders to fund billions of debts. Issuing enough shares to replace the debt was not an attractive option with the share price below $5.

And, at year-end 2008, there was a worldwide credit crisis, due to the collapse of Lehman Brothers in September and the turmoil in markets.

The company also sold US$1.5 billion in shares to a Chinese investment entity.

An iconic Canadian company survived, but only with substantial help from the junk bond market at just the right time.