Crude oil has plunged below $95 this week, from a recent peak of $123 in March 2022. In the past, high prices for crude oil have been associated with recession.

Is the price action of crude oil predicting a recession?

Crude oil is the most actively traded commodity in the world. Its impact on the world economy is substantial, although smaller than it was in the 1970s. Oil prices also affect the stock market, although the sector is much smaller now, even after this recent rally. 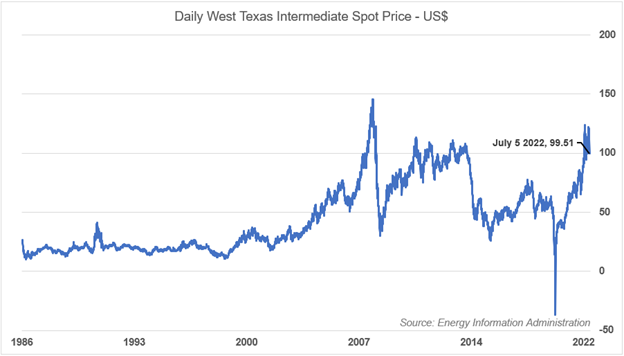 While the recent peak price was notable, the peak in June 2008 was higher, at $140. That peak was followed by one of the worst recessions since the 1930s.

And the price plunge in April 2020, due to the COVID-19 panic, was the most dramatic of all. That time the price of crude oil went negative $37 as speculators were caught with futures contracts that they could not sell and had to pay to be unburdened of the obligation of owning crude oil. The peak before that low was about $75. A very brief recession followed.

One reason for a precipitous plunge in crude oil prices is that higher prices cause consumers and industry to use less gasoline in their daily lives, thus reducing demand for crude, called “demand destruction”. Analysts have varied opinions on the price that would trigger demand destruction. But $123 per barrel appears to have made an impact on crude oil dependent activities like driving.

In the week ending June 24, demand for gasoline dropped to 8.93 million barrels, a modest 2.6 percent decline from the same period last year, according to the EIA.

Unemployment in the US is very low, as people who want a job have one, and could find another job quickly if they wanted. Wages are expected to rise as there is a worker shortage and many employers will pay up to attract workers. A worker getting a pay raise is not likely to stop driving, even with high gasoline prices.

In the US the price of gasoline hit US$4.80 per gallon, which is equivalent to C$1.65 per litre in Canada. This US price is an increase of 50 percent from last year.

So, crude oil and gasoline price increases alone might not be enough to cause recession, especially if the current slump in crude prices continues.

But the US consumer is struggling with higher interest rates, food prices and gasoline costs. The combination of these could be enough to cause a substantial reduction in discretionary spending, leading to recession.