New battery design for BEVs could be a breakthrough

Battery technology will be key to rapid adoption of battery electric vehicles (BEVs).

has announced the specifications for a new battery design.

Will this improvement push EVs into a dominant role?

Here’s a release including a 4-minute video showing CATL’s battery compared to Tesla’s 4680.

CATL is a $170 billion market capitalization company based in China. The company provides batteries to most electric vehicle manufacturers, including Tesla.

The new battery, which will be available in 2023, is called Qilin and extends the range of a BEV to 1,000 kilometers. The top-of-the line Tesla — Model S Plaid — has a range of 620 km. The “Qilin” name comes from a Chinese mythical creature.

An important detail is the fast-paced charging of the new design. CATL claims that the battery can go from 10% to 80% charge in just ten minutes. This could be a game-changer for many potential EV buyers.

The range improvement comes from an improved cooling system. Lithium-ion batteries need to avoid overheating for safety and durability. Qilin is also 13% more powerful than the new 4680 batteries from Tesla.

“It’s an important advancement for CATL as it keeps them at the forefront on the innovation side,” said Tu Le, managing director of Beijing-based consultancy Sino Auto Insights. “Being the lowest cost provider isn’t enough to command loyalty, there needs to be more to it -- and that seems to be the Qilin battery for CATL.”

CATL also completed a massive capital raise in June 2022, selling shares through a private placement valued at $6.7 billion. This is the second largest share sale this year in the world. The largest placement of 2022 was by a large Korean battery maker, LG Energy Solution, which raised $10.7 billion in January. BYD, another leading battery maker, raised $1.8 billion in late 2021.

The fact that three of the biggest share sales in the world in the last eight months are battery suppliers highlights the importance of battery supplies for the BEV space. While battery electric vehicles only make up about 5% of US car sales, sales in China and Europe BEVs are capturing more than 20% of sales. By 2030 some expect that BEVs will be 70% of sales worldwide, which would be more than 55 million vehicles at today’s annual rates.

This means that battery demand will have to grow by 10x or more to provide storage for light vehicles and also for long-term storage, ESS, which is used for the electric grid. 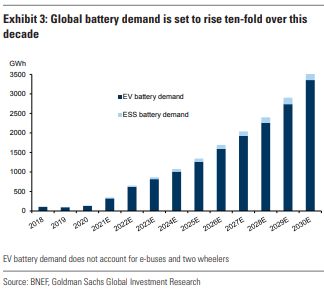 It is hard to imagine how many new battery manufacturing plants will be built by Tesla, CATL, LG and BYD and others. The demand for lithium, nickel and cobalt will multiply by at least an order of magnitude.

As the electric vehicle revolution gains momentum this new battery design from CATL will be a catalyst for even faster growth.