On March 29th the Canadian government announced a plan to reduce carbon emissions across all sectors of the economy, targeting a 40-45% reduction below 2005 levels (see plan here). The government is committing to $9.1 billion in new investment towards carbon capture technology, zero-emission vehicles, and cleaner electrical generation. Many stakeholders are still digesting the plan, so we expect more analysis on potential impacts in the coming weeks, but Prime Minister Trudeau has stated this is the “boldest and most specific step yet. It’s ambitious and it’s achievable.”

Many questions remain, however.  Among them, how achievable are these targets and who will bear the cost?

There are few topics as controversial as climate policy and you don’t need to look far to find very polar views. Amid the extremes however, there is a growing consensus that while fossil fuels are not going to be replaced anytime soon, we should be increasingly cognizant of what our future looks like if we do nothing to reduce carbon emissions.

It’s generally accepted that the oil and gas sector is a large emitter of carbon, but which sectors generate the rest of our carbon?

As of 2019, the combined emissions for the oil and gas sector were 26%, sharing the ignoble lead with transportation, also at 26%. These two sectors account for over half of all emissions, with agriculture, electricity, buildings, manufacturing, and waste sharing the remaining 48% pretty evenly. The chart on the right shows that Canada represents only 1.5% of global emissions but we tend to be near the top when measured on a per capita basis.

It has been said that there is no path to lower emissions without significant reductions from the oil patch and looking at the chart above that seems pretty obvious. So, what specifically does Trudeau’s new climate plan expect from each sector? 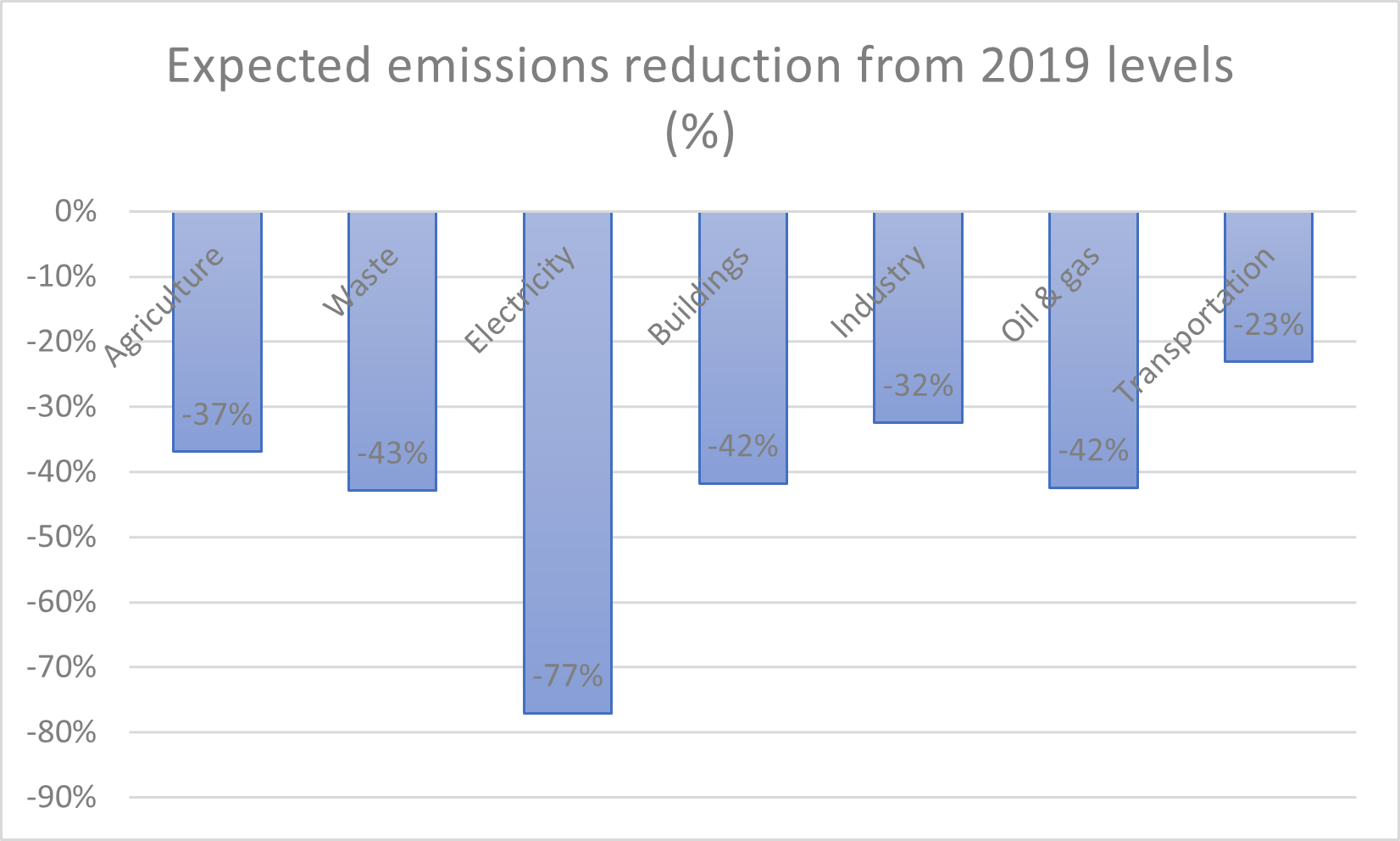 Electricity stands out with the largest expected reduction on a percentage basis at 77% and to this end $850 million has been committed toward renewable electricity and grid modernization. But the reality is, based on contribution, this pales in comparison to the 42% reduction expected from the oil and gas sector.

For the oil and gas sector, the “Pathway to 2030” plan leans heavily on CCUS technology (carbon capture, utilization, and storage) by way of investment in tax credits. The Alberta government in partnership with industry has been investing in CCUS for the last decade and while there is growing justification to believe it will be an essential element is reducing emissions, early results have proven it is not a panacea. The fact that funding must be deployed, projects both approved and constructed, suggests that it could be years before new CCUS projects even begin to have an impact on emissions.

Rachel Notley, is also skeptical of the plan, perhaps one of the best indicators that it is unrealistic.

“Based on what we are hearing from folks in the oil and gas sector, the 42 per cent (emissions cut) by 2030 is not just ambitious, it’s beyond ambitious,” Notley said. “It’s a fantasy.”

The 2030 Emissions Reduction Plan also includes mandated targets for zero-emission vehicles and continues the plan to raise the price of carbon by 240% (current level $50, 2030 target $170).

Most agree that shifting toward a less carbon intensive society is both necessary and commendable. The tough part is deciding who bears the cost and how to implement change. With consumers struggling under the highest price inflation seen in decades the timing of this announcement seems out of touch with reality. Add in renewed calls for increased availability of ethically sourced energy as we watch events unfold in the Ukraine and an Alberta energy sector that has only just recovered from a 7-year recession. It becomes easy to draw the conclusion that this policy was formed with more emphasis on ideology than the impact it will have on consumers, Alberta, or economic growth.