How to get inflation and the housing bubble under control again

The current inflation surge in Canada and around the world demands answers from government. Will inflation be brought under control? How?

I was invited along, with others, to present on March 28, 2022, to the Standing Committee on Finance for the House of Commons on a Zoom call. The topic is inflation, and the housing bubble is a key part of that.

You can watch the whole two hours, including my statement and the Question-and-Answer period. There were several witnesses and committee members who asked questions. I was the first presenter as a witness, about 6 minutes from the beginning of the video.

Following is my written submission which includes speaking notes for the five-minute opening statement and some short comments on several ideas for getting the housing bubble and inflation under control.

Thank you for the invitation to contribute to this very important work, tackling the question of what to do about inflation.

I am here as a private individual and author of 3 books on finance. I also work as an investment advisor and portfolio manager with one of Canada’s largest independent wealth management firms and I am now in my 43rd year of doing that work.

My first book, called “Investment Traps and How to Avoid Them” warned of the stock market bubble in 1999.

The second and third publications came out in 2015 and 2018, as first and second editions of the book titled: “When the Bubble Bursts: Surviving the Canadian Real Estate Crash”.

People have noticed that it has been six years since the first edition was released, and the housing bubble keeps getting bigger and bigger. Does that mean the bubble will never burst and my thesis is wrong?

I am not going to be wrong about the housing bubble bursting, but I am very early!

I wrote books on housing bubbles because I kept hearing from my clients and others that house prices will always go up. As an investment professional I get nervous when people become so certain about an investment but especially one that involves borrowing so much money. And each year more people were getting themselves, and their children, heavily invested in housing. By 2010 the housing bubble was well on its way and since the brief COVID-19 recession in 2020 it has become a full-blown mania, probably unsurpassed anywhere in the world.

I see parents and grandparents putting a secure retirement at risk by gifting large down payments to their offspring, co-signing huge mortgage loans and buying second and third properties often used to provide housing for their children at little or no rent. While this will be fine if house prices never drop, it will be a disaster if we see a crash as happened in the US, Ireland and Spain during the Global Financial Crisis.

The topic today is inflation, not housing bubbles. But there is an important connection between the two.

When people say inflation, they usually mean the Consumer Price index. In my research I found there is a complicated relationship between the CPI and house prices.

House prices in Canada, on average, have grown at more than 7% per annum over 22 years. This means a 4-to-5-fold increase in total.

This is obviously inflation, and the CPI considers the cost of housing as its most important component. In the CPI “shelter costs” are weighted 31%. But while house prices increase at 7% or more the shelter component of inflation increased by only 2.6 percent per annum.

It might be a surprise to learn that the CPI does not include house prices when calculating inflation.

To illustrate this, I distributed a chart to members of the committee that shows 7 indexes, a very busy chart. The chart shows house prices in Vancouver, Toronto and the average Canadian house price as well as outstanding household debt.

But the shelter cost index has increased to only 175, while CPI and after-tax median income are both just under 200. So, house prices more than four-fold, shelter costs less than two-fold.

But now if the Bank of Canada allows mortgage rates to rise above inflation, there will be a sharp increase in that monthly payment causing the shelter component to rise faster than the CPI.

Before I wrap up my statement, I want to mention one other key issue that connects housing and inflation. That is the world-leading burden of private sector debt in Canada. Private sector debt is household debt plus corporate debt, not including the financial sector, usually as a ratio of GDP.

The need to borrow to keep up with house prices has led Canadians into a dangerous place when comparing private sector debt to other countries. Research shows that any country that has a ratio of private sector debt to GDP over 150% and has experienced rapid growth in that ratio will endure a financial crisis eventually.

Household debt is 110 percent of GDP. Of course, most of that is mortgage debt.

Recently corporate debt has grown rapidly also, to about 123 percent of GDP. So, total private sector debt at 233 percent is well above the minimum threshold for a financial crisis.

Raising interest rates with such an elevated burden of private sector debt will be difficult.

But inflation must be lowered, even if it means bursting the housing bubble and triggering a recession.

Thank you for your attention and I look forward to your questions.

2. Expansion of debts related to housing inflation in Canada

Canada’s private sector debt is in the danger zone. This is measured by the level of debt compared to GDP, with Canada at 233% of GDP compared to the threshold of 150% to reach the danger zone. And there’s been a rapid increase in the ratio of debt to GDP of greater than 17% over a five-year period. 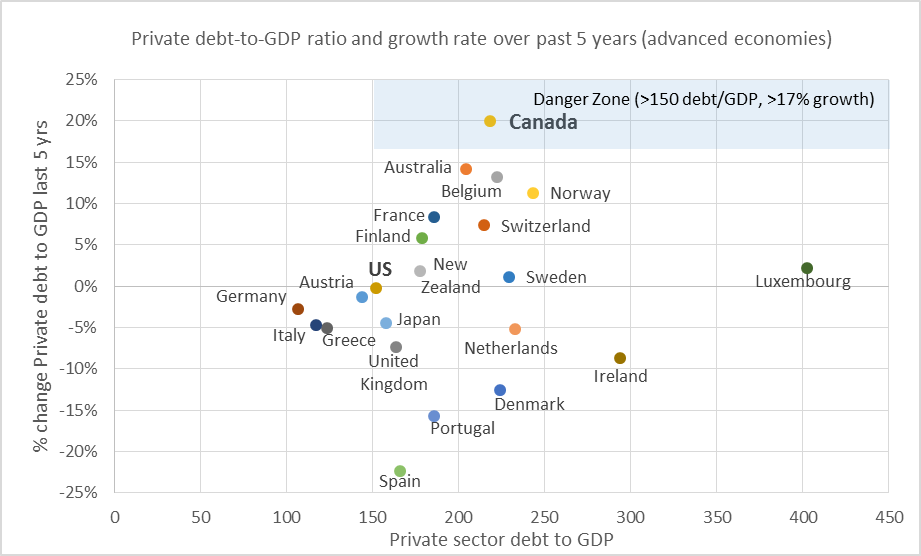 Chart that shows how Canada’s household debt compares to the U.S.: 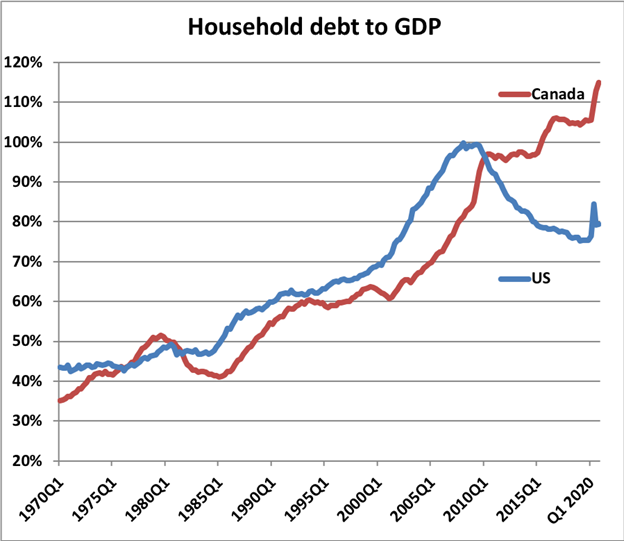 4. Incentives for banks to do mortgage lending rather than lending for more productive endeavors

One important profit metric to measure banks’ performance is “return on equity” or ROE. The smaller the E, or equity or capital, the higher the ROE and the better the performance. The amount of equity required by regulators depends on the type of loan. For example, a business loan is considered risky and therefore a capital requirement of 100% or more is needed. A mortgage loan, on the other hand, is considered low-risk and even zero-risk if backed by government mortgage insurance. By emphasizing mortgage lending Canada’s banks can keep their capital requirement low and their ROE high.

Hyman Minsky was an American economist who did not become famous until the term “Minsky Moment” was popularized. He theorized the bank finance cycle came in three stages:

This last stage occurs when borrowers need new loans to refinance their existing loans and cannot afford to pay even the interest on the loan unless they sell assets. Once new loans to those borrowers dry up, when the lenders get nervous, a Minsky Moment arrives, and assets must be sold to cover loans in default. This leads to a deflationary spiral when heavily financed assets, like real estate are sold at lower and lower prices by the lenders.

Canada’s residential real estate market has been in the Ponzi finance stage for several years now. Lenders are still confident in providing credit to real estate speculators, but this will end at some point, perhaps when rate rise.

6. Recommendations to end the boom-and-bust cycle in housing

Further information on all these topics and much more can be found in the second edition of “When the Bubble Bursts: Surviving the Canadian Real Estate Crash”. Dundurn 2018.