Inflation expectations are still too low

Economists are underestimating inflation. The consensus is for inflation to drop to 2.9 percent by the end of 2022. But that consensus should be viewed with suspicion.

How should investors act if we get higher inflation instead?

The consensus of economists has inflation dropping from 7 percent to sub-3 percent by the end of 2022. This seems unrealistic and economists have a poor track record with inflation predictions. 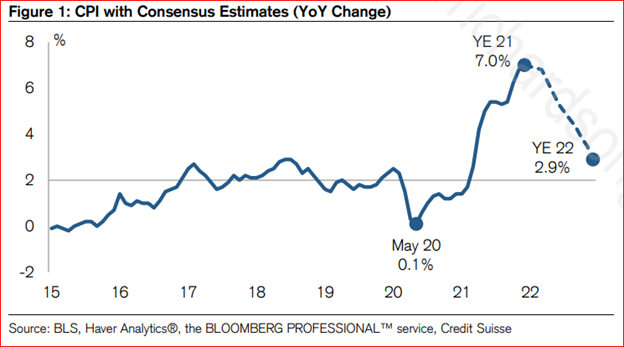 In reality, there is very little chance that inflation can drop that quickly, unless a recession is about to begin. Setting that aside, the probability is that U.S. inflation could go even higher than the current 7 percent, as happened in the 1970s.

But a consensus like that gives the Fed time to wait before acting aggressively. The closer we get to the November elections the more reluctant the Fed will be to hike rates further. So expect a few increases in the Fed overnight money rate, currently at 0.00 to 0.25 percent, but those increases will do little to affect behaviour of people who are starting to anticipate a cycle of higher and higher inflation. The Fed would have to raise interest rates quickly enough and high enough to trigger a recession to break inflation expectations.

The same discrepancy exists in Canada — people expect house prices to keep going higher, even after the gains of the last few years, or perhaps because of those gains.

From Bloomberg and Nanos Research: 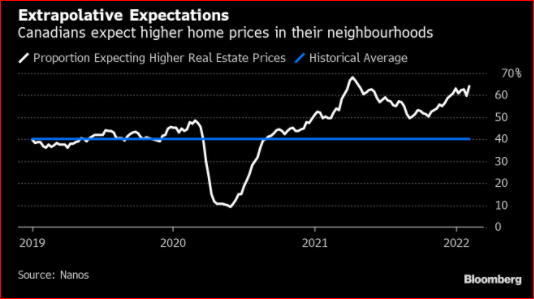 Real estate-addicted Canadians aren’t being scared off by the threat of higher interest rates, polling suggests.

Optimism about the nation’s housing market rose to near record levels last week, despite warnings from central bank and regulatory officials that borrowing costs are poised to increase and could hit the real estate market.

Some 64% of Canadians expect the value of real estate in their neighborhoods to increase over the next six months, according to the latest weekly survey by Nanos Research Group for Bloomberg News. That’s up from 60% last week, making it one of the fastest 7-day increases in confidence on record … Canada is behind only New Zealand in Bloomberg’s global measure of frothy housing markets.”

This is equal to the highest percentage ever expecting higher house prices. Canadians are fully aware that interest rates are going up, but that does not change their view.

How can investors protect themselves from higher inflation?

One option is government bonds with inflation protection. In Canada there are Real Return Bonds (RRBs) and in the U.S. Treasury Inflation Protected Securities (TIPS).

These bonds pay a return determined by the CPI. If CPI is 7 percent the value of the bond is adjusted by that same amount. There are some tax complexities to these instruments, so it is important to get advice before investing.