The end of this bull market has arrived. Recently Jeremy Grantham described how this extreme valuation in the stock market, bond market and some housing markets is a very rare event.

And he claims that it is over.

Grantham first came to my attention at a conference in 2003. He was a keynote speaker and started his talk by saying, “I’ve never been wrong … {long pause} … but I’ve been early.”

He was talking about the housing bubble in the U.S., and he was early, as the Global Financial Crisis did not begin until 2007. But he was right. In early 2007 he put out this report, “It’s everywhere, in everything: The First Truly Global Bubble."

In a GMO Viewpoint on January 20, 2022, Grantham made another bold prediction in “Let the Wild Rumpus Begin”.

He claims that this time we have a 3-sigma event — a superbubble — and the coming correction will be very painful. He states that the bubble is in several asset classes, including housing, (mentioning Canada, Australia and China specifically) equities, bonds and commodities. The GFC was a 2-sigma event, which has happened every 35 years in recent history. Grantham’s researchers examined all 2-sigma events in every market, finding more than 300 in financial history, and all the events in the stock markets in developed countries corrected back to their trend line or lower. He suggests that the current trend line — the minimum target for a correction — for the S&P 500 is 2,500, a full 2,000 points below today’s level. 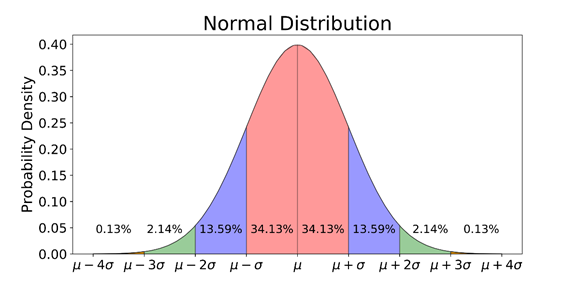 The mean value — µ — is in the middle and most events happen close to the mean (68% within one sigma), while rare events are at the tails of the curve. A 3-sigma event happens less than one-in-a-hundred times.

But Grantham points out that this is the 4th 3-sigma stock market event in 100 years, the others being Japan equities in 1989, the U.S. stock market in 1929 and again in 2000 and the current superbubble.

Grantham blames the post-Volcker Federal Reserve leadership, which has repeatedly and unashamedly promoted bubbles to become much larger than they might have been. The report goes through the explanation of how the Fed helped create these bubbles and regular readers will have read my notes on this topic. Grantham states that it started with Alan Greenspan in October 1987, and I described in detail that pivotal event in my book. The creation of the so-called “Greenspan Put” was one of the most destructive events in the history of equity markets. Every Fed chair since then has followed Greenspan’s model.

Grantham, semi-retired and 83 years old, would not be making this bold statement unless he believed it.

It is a good warning to heed.