The end of easy money is near

The Federal Reserve has been promoting asset bubbles for years. This easy money policy has created a series of booms, widened income and wealth inequality and added massive debt to the system.

This week the Fed signaled it is ready to end this misguided policy.

Will the Fed have the backbone to stop promoting asset bubbles?

In a pivotal meeting Wednesday the Federal Reserve Open Market Committee decided to start raising rates. Not this week, although that would have made sense, but soon, which means probably at its March meeting. The chair of the Fed, Jerome Powell, hinted that several more hikes are likely after the March meeting. The stock market sold off on this news.

The ridiculous situation where the Fed funds rate is essentially at zero while inflation is near 7 percent may finally be coming to an end. The spread between inflation and the Fed rate is now the widest since the 1970s.

Back then it took the unceremonious dumping of one Fed chair, Arthur Burns, and the hiring of a true hawk, Paul Volcker, to begin the process of getting inflation under control. Even then it took three more years and interest rates reaching almost 20 percent before the markets became convinced that easy money policies were ended.

Burns was appointed by President Richard Nixon with instructions to provide easy access to credit until the 1972 election. Nixon won that election in a landslide, but inflation surged higher, eventually requiring wage and price controls. By the time that President Jimmy Carter appointed Volcker to the Fed in 1979 it required extraordinary discipline to get inflation back under control.

Until now the Fed has been playing a dangerous waiting game, hoping that inflation will subside on its own.

But all signs point to inflationary pressures continuing to build. Wage settlements and house prices are just two indications that the average person on main street is not listening to economists. Their gut instinct is that inflation will get stronger, and they are adjusting their behaviour accordingly. 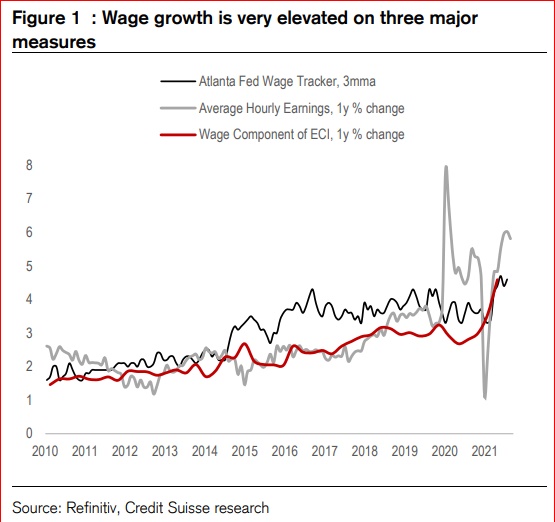 Wage demands are gaining strength and given the difficulty reported by employers in finding people to work the employers will have to accommodate these demands.

According to Credit Suisse the Fed will gradually increase its Fed funds rate to 2–2.5 percent by the end of 2023. This pace implies rate hikes every quarter if the Fed sticks to its convention of hiking only 0.25 percent at each meeting. At the end of that period, two years hence, the real interest rate (Fed funds minus inflation) could still be negative if inflation stays elevated.

The Fed’s easy money policy is very detrimental to all those who eschewed speculation in their borrowing and investments decisions.

Hopefully the Fed will speed up the pace of interest rate increases to choke off rampant speculation on borrowed money and restore the Fed’s tarnished credibility.

It will be difficult for the Fed to convince the market that the easy money spigot is closed for good.