The end of the property bubble in China

The end of the property bubble in China has arrived. The likely next stage is liquidation, with the government deciding who writes off the bad debts that have been created.

China’s property bubble is second to none. The size of total debt, the scale of investment in property and the participation of households are all unprecedented.

This bubble started to form in the 1990s, when the Chinese people were first allowed to invest in home ownership. For most of them this was new, as the government was the sole owner of land and housing previously.

Under Deng Xiaoping leadership the private sector took the lead in building apartments for millions of Chinese families who wanted to own property. Many property developers became billionaires, and their overnight success earned them a spot among the richest people in the world.

Today the current leadership in China is reigning in private entrepreneurs. Almost daily there is another announcement of changes in the rules that would tighten the grip of the government, and the Party, on the private sector.

President Xi Jinping’s “common prosperity” policy is on a direct collision course with the property billionaires.

Property developers are usually drowning in debt; unfathomable amounts of debt of both types, onshore and offshore. The onshore variety, in yuan, can be handled between the government, the banks and the developers. But offshore debt, borrowed in U.S. dollars, is a big problem.

The largest developer, Country Garden Holdings, tried to raise money in the bond market last week but met a cold shoulder. Consequently, Country Garden bonds took a hit, trading at a 22 percent discount to par value. The shares hit $16 in early 2018 and have drifted lower since, down about 60 percent from that peak. Country Gardens’ debt is rated only one notch above junk now. 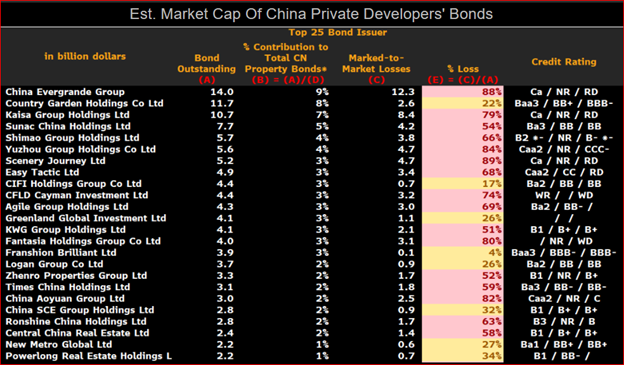 In the 350 bonds outstanding in the offshore market, there is a total par value of $151 billion but the trading value is only $69 billion. If those bonds had to be liquidated quickly losses would be even steeper and more than $100 billion could disappear. These losses would accrue almost entirely to foreign investors in North America, Europe, London, Dubai and elsewhere. Bond investors are nervous.

This crisis has been building since before July 2021, when I first wrote about the well-known and troubled developer, China Evergrande, here, “A gray rhino could rock the world”. Evergrande bonds are trading at an 88 percent discount.

The Chinese government has the resources to “make good” on these losses. Large state-owned property developers with $1 trillion of value could absorb those bad debts if the government wished.

But that wouldn’t stop the property bubble from bursting, as China’s population has stopped growing and property speculation is already universal.

If property values decline, selling inventory will get more and more difficult and further price cuts will become mandatory.

Who will take the hit? Government, households, “billionaires” or foreign investors? Perhaps ‘all of the above’ is the correct answer.