The U.S. stock market is at record highs. But only a few stocks are responsible for driving the majority of the recent gains.

Is a concentrated stock market a healthy market?

Most people are aware that the U.S. stock market has been gaining strength for several years. The valuation of the main index, the S&P 500, is near record high levels, just short of the peak in March 2000 based on the Shiller CAPE.

Robert Shiller, economist and winner of the Nobel prize in economics, keeps track of an index that measures the degree of extremes in the stock market. His March 2000 book, “Irrational Exuberance”, out at the peak of the dot-com bubble, discusses excessive market volatility, greed and irrational behavior that humans exhibit as they try to make money when stocks are hot.

Going back to the 1880s, Shiller tracks stock prices and compares them to company earnings. 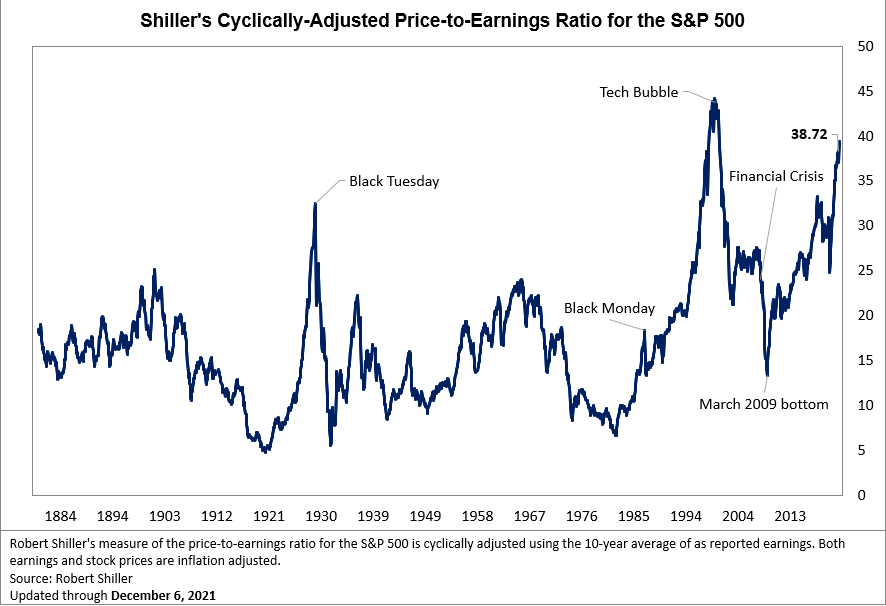 It is clear that this degree of overvaluation is rare and extreme, well past the peak of October 1929, and rivaling the previous top in March 2000, when the advent of the internet new technology created a bubble of massive proportions.

What is less obvious is the degree of concentration in this current bubble. The stock market index is made up of 500 stocks but recent gains — the run since March 2021 — have been concentrated in just a few companies. In fact, just five companies make up a significant amount of the performance in  the last few months. Bianco Research made a graph: 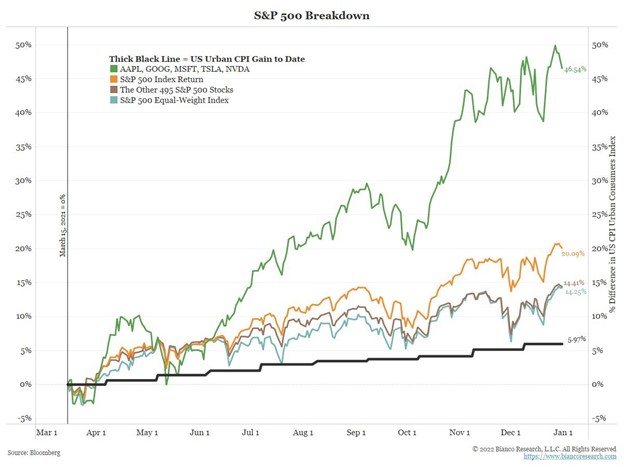 Apple, Google, Microsoft, Tesla and Nvidia gained 46 percent while the other 495 stocks showed gains of 14 percent.

Previous charts like this showed a concentration in technology stocks that included Amazon and Facebook but left out Tesla and Nvidia. Tesla has only recently been added to the S&P500.

Even more interesting is that the average tech stock is doing poorly in this rally. In fact, more than 40 percent of stocks in the tech-heavy NASDAQ are down 50 percent or more: 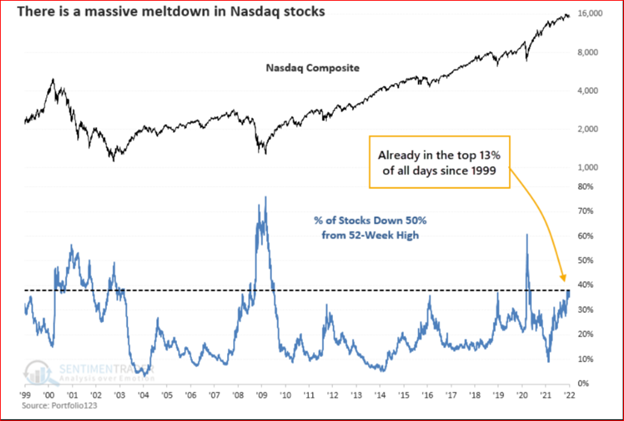 Posts on social media state that an investor can buy stocks and hold them forever. This is a meme — HODL — or Hold On for Dear Life.  HODL usually refers to cryptocurrencies like bitcoin, but the sentiment exists in the market, especially for stocks like Tesla.

Are these leaders immune to corrections that hit other stocks? Of course not.

There will be a correction in most stock prices during the next bear market. On the Shiller graph a 50 percent decline in stocks would only take the valuation back to the average level — 17. Markets have bottomed below 10 in past cycles. Some leading stocks will correct more, perhaps 90 percent, as Amazon did.

It is unhealthy for a few leaders to dominate the market. The widespread faith that one can hold these stocks forever is a strong warning.