Is competition from Volkswagen and Toyota about to derail Tesla’s dominance?

The stock market valuation for Tesla hit $1 trillion, around the same time Apple’s total worth reached $3 trillion. But Apple makes about $100 billion in annual profit, giving a Price to Earnings ratio of about 30.

Obviously Tesla is in an impressive growth phase. Annual deliveries for 2021 were about 936,000 vehicles, giving Tesla a top-of-the category profit of $10,000 per unit.

The two largest OEMs, Volkswagen and Toyota, each produce around 9 million units per year, and profit is $20 billion and $27 billion respectively. So Tesla made about 1/3 to ½ the profits of those companies with sales that were only about 10 percent of their totals.

The stock market gives Tesla a lot of credit for its unusual ability to make profits and for its leadership position in EVs.

Both of these factories will add a material amount of production to Tesla’s annual total. Tesla could be selling 2 million units by the end of 2022, and profits could double, if demand for Tesla cars remains strong. People ordering the Model 3 are facing wait times of six months.

Elon Musk estimated that by 2030 Tesla will be selling 20 million vehicles. Musk is known for throwing out “stretch targets” that seem too ambitious. That means about 15 more Gigafactories like Shanghai, which is expected to eventually produce 1 million vehicles per year. Since 2030 is 8 years away, that means building at least 2 Gigafactories per year. As there are two currently under construction, and they take about a year to complete, it could be done.

It will get easier to build new EV factories. Assembly lines can be standardized as Henry Ford did in the 1920s. And EVs are much less complicated to manufacture.

Tesla’s target of 20 million would be less than ¼ of the total vehicle sales in 2030, estimated to be 95 million. In the BEV space Tesla would supply about ½ of the 40 million total estimated by BNEF. 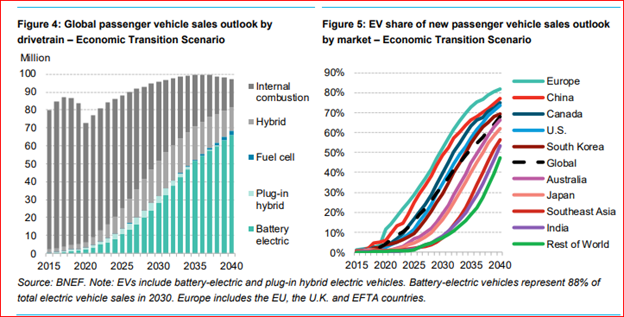 Volkswagen and Toyota have work to do to challenge Tesla’s dominance.

Toyota is further behind in the pure BEV segment, although the Prius Hybrid is a Toyota. They announced 30 new BEV models by 2030 with a 3.5 million sales target in a major shift.

These plans from those two leaders are not nearly ambitious enough to knock Tesla off the podium.