Policy makers in the U.S., and elsewhere, are in the middle of making a dangerous policy mistake, according to Martin Barnes, a prominent economist.

The Federal Reserve is “caught in a trap of its own making”.

Martin Barnes, formerly chief economist of BCA Research, is now retired. But he still writes occasional reports, and his recent piece is called “A case of policy mismanagement” available at alpinemacro.com

As Barnes points out that “inflation is at its highest level in three decades, house prices are soaring, and the current unemployment rate is … far below its historical average and the stock market is at an all-time high.”

The question is what do central bankers think justifies such an unusual degree of stimulative policy in this circumstance?

This chart shows how strong the economy is currently, especially retail sales and how massive the Fed policy support has been (shown by Fed assets): 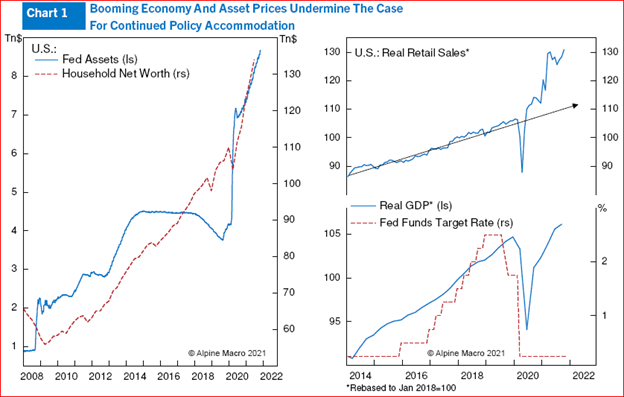 Barnes claims that “we now have the perfect recipe for a policy error with the Fed erring on the side of staying too easy for too long.”

As I pointed out in the 2018 second edition of “When the Bubble Bursts Surviving the Canadian Real Estate Crash,” an early and egregious example of the Fed making a major error occurred shortly after Alan Greenspan was appointed chair of the Fed by President Reagan in August 1987. Greenspan had no prior experience in central banking.

Faced with a 20 percent drop in the Dow Jones on Monday, October 19, 1987, after receiving a call from Reagan’s assistant that evening, Greenspan proceeded to directly support the stock market, going beyond the Fed’s role as defined in 1913 when the Fed was created.

That one-day stock market crash was related to portfolio insurance that institutional investors had put in place. Because sell orders were triggered by a computer the selling continued throughout the day and as prices dropped further even more selling was instigated by the algorithm.

While we can never know what would have happened if the Fed had stayed on the sidelines it seems likely that the sell-off would have been a short-lived event. Indeed, by the end of that year the stock market regained all its losses, and the markets closed higher on the year.

But the precedent was set and since then the Fed has acted often to support stock markets. It seems normal to investors today, but it is dangerous.

The Fed is determined to protect investors from anything bad that could happen.

Barnes says, “The Fed is caught in a trap of its own making … there is now a financial addiction to low interest rates that the Fed will find it extremely difficult to normalize policy without unleashing chaos in the markets.”

He concludes that “policy normalization will need to occur gradually but the longer it is delayed the greater the risks of an ugly economic and financial outcome.”

His voice of reason unfortunately will not reach the people who need to hear it.