China Evergrande is not Lehman Brothers

China Evergrande, the second largest property developer in China and the most indebted in the world, missed loan payments this week, triggering a technical default.

Is the China Evergrande crisis like the Lehman Brothers bankruptcy?

China Evergrande’s total liabilities are about $300 billion. Net debt is less than $100 billion, but other liabilities are more than $200 billion. Home buyers have deposits on unfinished apartments while contractors have unpaid invoices. Evergrande is large, operating in 200 cities with over 1,000 projects, so millions of Chinese businesses and families will be impacted by its collapse.

Evergrande’s struggles will have a significant impact on the property market. It is normal for families to give their savings (and sometimes borrowed funds) to the developer before the building is constructed. This seems risky, but buyers assume that the government would never let them down. If that trust is broken, developers lose an important financing facility.

Michael Pettis, author of books on China, wrote for the Carnegie Endowment for International Peace.

Pettis points out that the problem is complicated by the fact that “property developers, state-owned enterprises, local governments and even ordinary households … all have excessively high debt levels”. Regulators are worried about moral hazard if all the players are bailed out as the property sector is “notorious for its addiction to debt.”

China leads the world in growing private sector debt while its enormous property sector makes up a world-leading twenty-five percent of GDP.

On this chart a flat line indicates debt and GDP grew at the same rate: 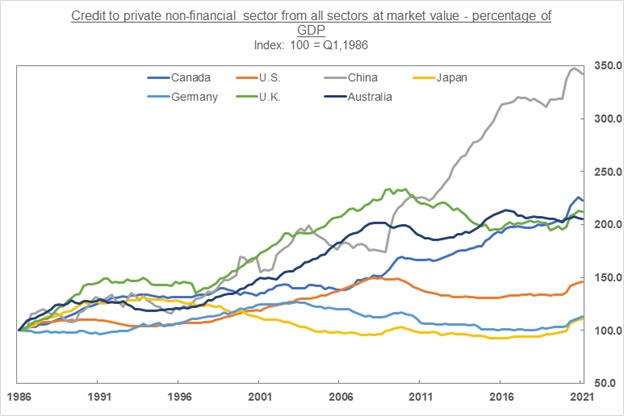 So, the Lehman parallel is not apt. “Minsky Moment” is a better reference.

Hyman Minsky (1919-1996), American economist, argued that there are three stages of finance. In his book “Stabilizing an Unstable Economy” Minsky describes the first stage as “hedge finance” where principal and interest is covered from income. “Speculative Finance” follows where lenders use asset price growth to cover loans as incomes are insufficient for repayment of the loan. The last stage, “Ponzi Finance”, happens when income cannot cover even the interest on loans.

China Evergrande’s failure to make interest payments this week suggests that Evergrande, if not the entire Chinese property sector, is in the third stage, the Ponzi phase.

Evergrande’s failure would have a much wider impact on China than the failure of a Wall Street firm like Lehman Brothers. 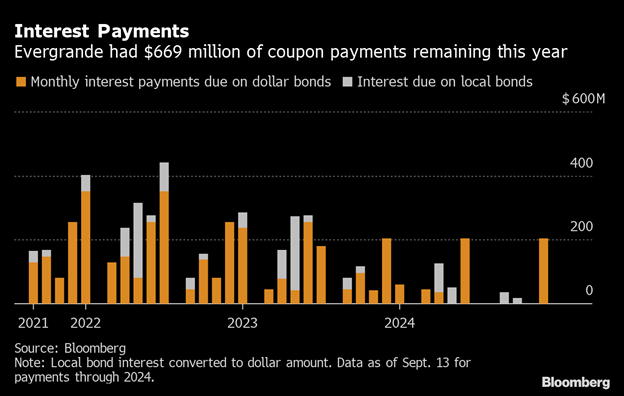