Nuclear power is an important source of low-emissions electricity that many expect to play a key role in meeting the challenge of reducing carbon emissions to zero by 2050.

As coal-fired electricity generation is phased out, electricity demand will be partly met by renewable sources, such as wind and solar. But many believe that nuclear power could play a crucial role.

The burning of coal is important in producing electricity. Coal-fired plants produce 39 percent of total electricity on earth and coal is the largest producer of carbon emissions.

On September 15, 2021, President Biden reiterated his goal of achieving 100 percent clean electricity by 2035. That goal would require the elimination of all coal and natural gas-fired electricity plants.

If renewable energy could replace coal there would be a significant improvement in emissions. But the sun does not always shine, and winds blow intermittently, so many believe another source of low-emissions electricity is needed.

Nuclear power is capable of generating abundant electricity, but hundreds of new reactors would have to be built quickly.

Recently there have been more reactor closures than new builds. The Fukushima Daiichi disaster in Japan in 2011 led to the closing of 54 nuclear reactors. Prior to the earthquake nuclear provided 30 percent of Japan’s electricity. 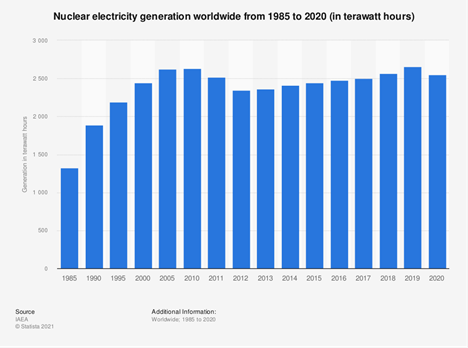 If coal were eliminated, 10,000 terawatt hours of new electricity production would be needed.

By comparison, the largest coal U.S. plant (Plant Bowen in Georgia) has capacity of 3.5 GW. The Hoover dam has 2.0GW capacity.

Worldwide there are 50 nuclear reactors under construction, with two in the U.S. with 1.2 GW capacity each.

In Somerset England at Hinkley Point there are two under construction, each with capacity of 1.6 GW. The plants will begin producing in 2026.

Hinkley Point will cost US$15 billion for each reactor so 1,000 reactors would cost $15 trillion. As permitting, planning and construction take at least 15 years, the buildout would be too slow to meet Biden’s goal for 2035.

Alternatively, an estimated 256 GW of solar and wind will be added in 2021, the equivalent of 165 reactors costing about US$600 billion or $2.34 billion per GW capacity. This is faster to build and cheaper than nuclear, although capacity utilization is lower for renewables and additional storage is needed.

So, enough nuclear electricity generation to phase out coal cannot be built by 2035, but wind and solar could come close if the intermittency problem can be managed. Natural gas plants will have to play a role during the transition.