Irrational exuberance is a term introduced by Alan Greenspan in a speech in December 1996. In 2021, the degree of enthusiasm for financial assets is at an extreme seldom seen before throughout history.

Will this episode of irrational exuberance lead to a crisis in markets?

Some market analysts and economists are very concerned about the eventual side effects (inflation) of the current fad to encourage monetary expansion as a route to boosting economic growth. There is a long history of the struggle at the Fed to balance its responsibilities for maintaining the purchasing power of the dollar and to maximize economic growth. By trying to do both, they may fail to accomplish either goal.

Alan Greenspan was governor of the Fed in October 1987, when one of the earliest actions to boost the stock market was undertaken. I chronicle this in the second edition of “When the Bubble Bursts”. This action was in response to a one-day drop in the Dow Jones Index of about 20 percent. Many more interventions followed.

The response to the stock market corrections after the dot-com bubble burst, the 9/11 attack, the Global Financial Crisis and the 2020 recession caused by a pandemic all triggered substantial responses by the Fed. The Fed has limited, blunt tools to promote economic growth. The Fed expanded the money supply and kept interest rates artificially low and encouraged aggressive lending to keep the economy going. So far there has been no serious price paid for these actions, but some observers are convinced there is no “free lunch”.

One possible unwanted side effect would be runaway inflationary expectations which the central bank would be forced to squash, causing great damage to the economy.

This has happened before: 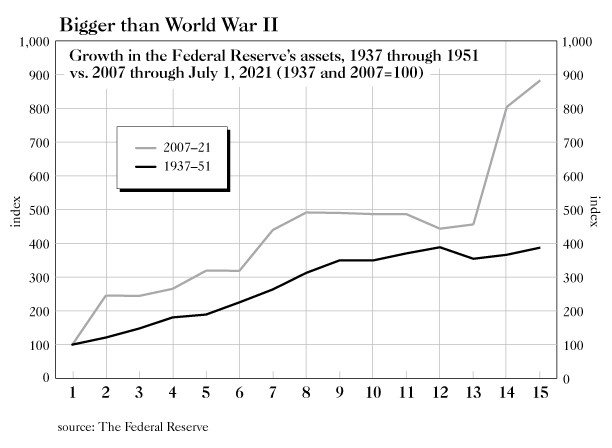 After World War II shown in the dark line, the Fed expanded its balance sheet by four-fold.

Recently the size of the Fed’s balance sheet has exploded by nine-fold. The obvious difference for the Fed in reacting to aftermath of a major war and some recent minor financial setbacks is ignored.

In Alan Greenspan’s speech on December 5, 1996, in the ninth year of his 20-year tenure as Fed chair, he said: “If the Federal Reserve’s monetary policy decisions were subject to Congressional or Presidential override, short-term political forces would soon dominate. The clear political preference for lower interest rates would unleash inflationary forces, inflicting severe damages on the economy.”

We are where Greenspan predicted, as the policy of low interest rates to boost the economy has been adopted repeatedly and some inflation has appeared.

Over time the Fed’s actions have led investors and speculators to a state of “irrational exuberance”, the phrase coined by Greenspan in that same speech.

These charts show how expensive stocks are now: 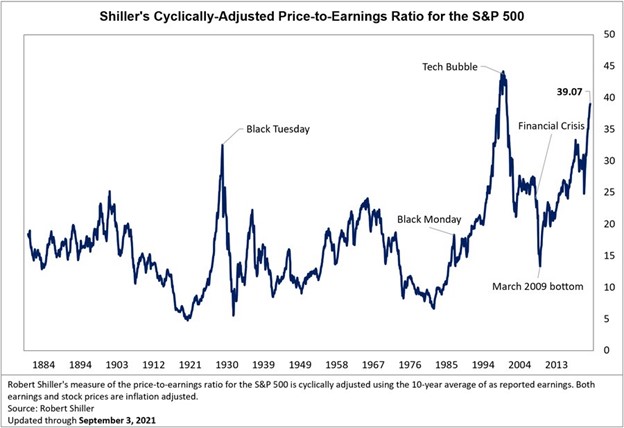 The Black Monday episode is the 1987 crash. 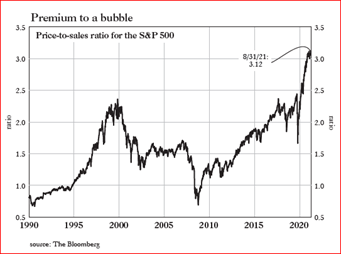 This bout of Fed boosterism could lead to runaway inflation, as signs are seen in housing, food, and used cars. Then the Fed would have to act, and it would not be pleasant.