OPEC failed again to reach agreement among its members and others to increase the supply of crude oil, a failure that risks an even greater surge in the price of oil which could trigger a worldwide recession.

Five of the last six recessions have been preceded by a spike in the price of crude oil. The one exception was the recession in 2020 caused by the pandemic of SARS-CoV-2.

Will OPEC get its act together in time?

The price of crude oil does not have the impact that it had in the 1970s when OPEC had the power to bring entire economies to the brink of disaster with price hikes caused by supply cuts.

This time is different. OPEC Plus, as the new entity is called which adds a number of non-OPEC producers like Russia, is trying to avoid a drop in demand for oil that would follow an oil price that is too high. 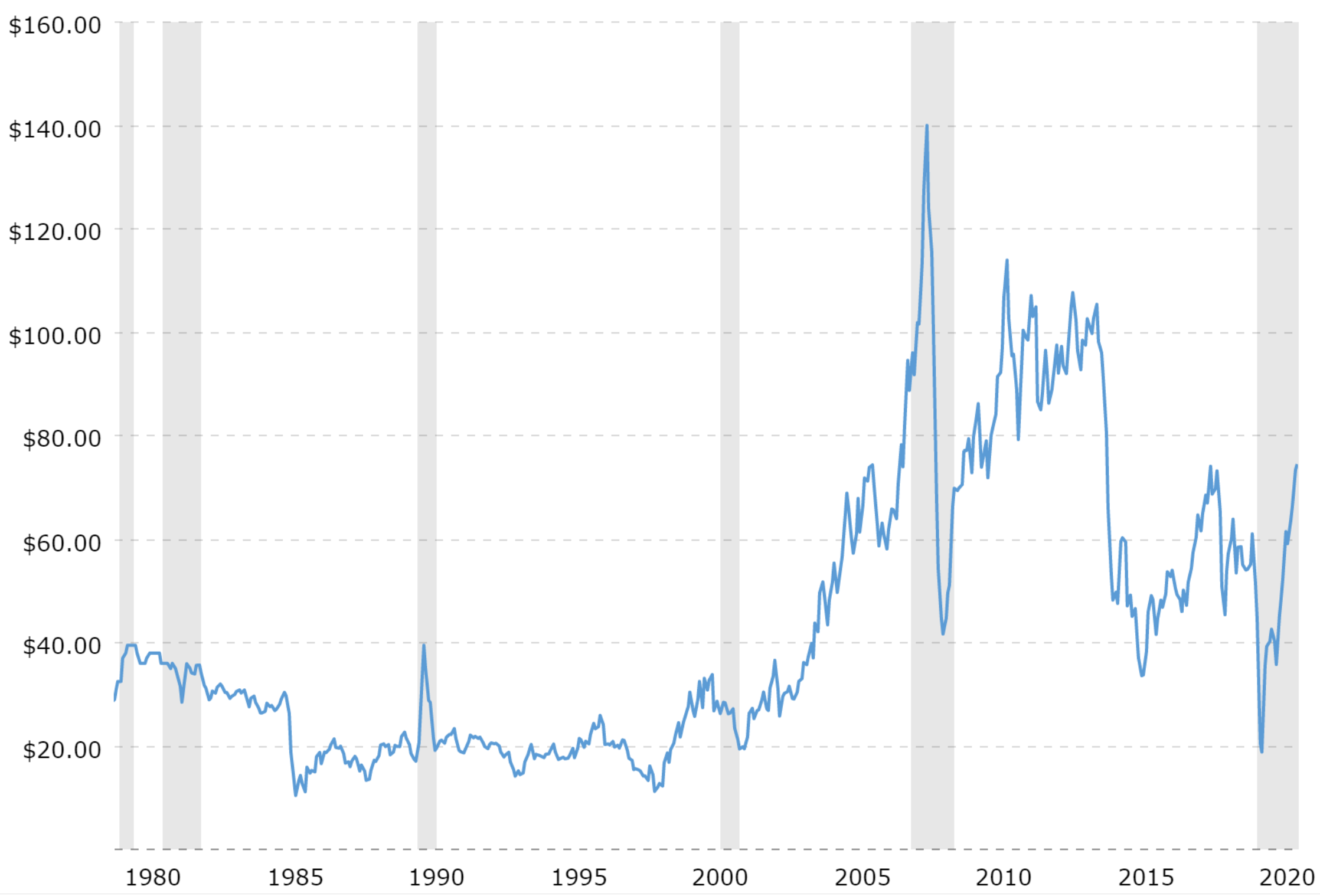 The peak in crude oil prices during 2008 shows clearly on the graph. The price range for oil for most of the last four decades has been $20-60 per barrel.

In an article on Bloomberg July 5, 2021, an expert opines that today’s higher price (currently $74) is bad for OPEC:

“Oil prices will pop if no deal means current production levels continue,” said Jason Bordoff, director of the Center on Global Energy Policy at Columbia University. “But that’s also not tenable because a price spike actually undermines the interests of the UAE, Russia and Saudi Arabia.”

The negative impact on the oil market, and especially Saudi Arabia, is the destruction of demand that occurs when high oil prices persist. On the supply side non-OPEC sources like shale oil in Texas and North Dakota and Canadian oil sands are eager to expand production to take advantage of higher prices.

If OPEC were serious about regaining control, they would increase production and push prices down to the $20 level to make most non-OPEC production uneconomic. As well, that low price would reduce the incentive for people to seek alternatives to crude oil, for example by switching to electric cars.

The US consumes about 18 million barrels per day, an amount that is no longer increasing. Just under ½ of those are made into gasoline to power automobiles and light trucks. If a significant percentage of those vehicles switch to electric, the loss for OPEC and the large oil producers will be catastrophic. Even though OPEC members are aware of this fact, they cannot reach agreement to protect their shaky coalition.

The 23-member OPEC cartel will flounder in its unattainable quest to keep prices high and demand stable.

Eventually the cartel could disappear as oil demand drops.