Exxon Mobil suffered a setback at its annual shareholder meeting in voting for members of the board of directors. Exxon lost the vote on three members, giving an activist investment fund a quarter of the seats on the twelve-member board. This new firm, called Engine No. 1, says that it is “pursuing long-term value by harnessing the power of capitalism.”

Will this new David be able to slay Goliath?

Exxon Mobil has come under attack for its corporate governance as well as its non-action on climate change. Until now Exxon has managed to fend off its nay-sayers and continued to pursue a “business as usual” approach even as the oil and gas industry is facing enormous challenges.

The decisions by Exxon to make two investments — Canadian oil sands expansion and a late entry into Texas shale oil — have come into question. Related write-downs on its balance sheet have totaled $20 billion in the last few years. Exxon has destroyed about $175 billion in shareholder value due to $300 billion of questionable investments that were unproductive.

According to Engine No. 1 (EN1), Exxon has underperformed the S&P 500 and other oil companies like Chevron, Shell, BP and Total. Total returns for Exxon shareholders were -14.8 percent in the decade to December 2020, compared to a gain of 271 percent for the S&P 500.

CEO Darren Woods earned about $75 million while Exxon Mobil lost about $200 billion in market capitalization. Once the largest company by value ($450 billion in 2013), Exxon has slipped to about $258 billion, up from about $130 billion in March 2020.  Now Tesla is valued at more than two times Exxon. 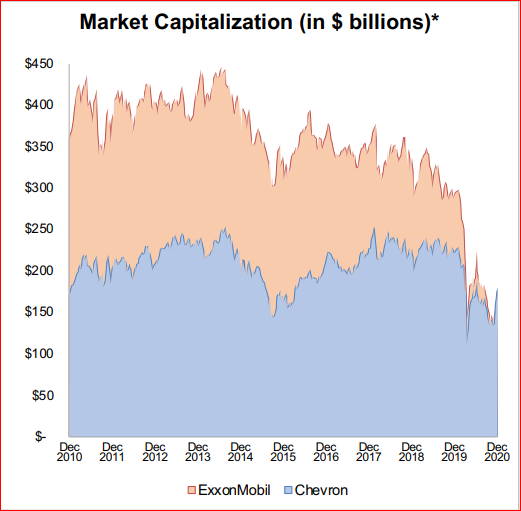 One of the key issues is a failure to address climate change. Exxon Mobil is the world’s 5th largest producer of greenhouse gas emissions, after China coal, Saudi Aramco, Gazprom (Russian gas producer) and National Iranian Oil Company. From a presentation by EN1.

In winning three of four seats sought on the board of Exxon, EN1 had a lot of help from large shareholders. The third biggest, Blackrock, held 6.7 percent of Exxon’s shares. Blackrock is a fund manager who track the markets with ETFs. Blackrock is the world’s largest fund manager with $8 trillion.

At $250 million in assets, EN1 is no match for Exxon Mobil with $250 billion in market value. But if you include the tens of trillions of dollars in Blackrock and other ETF funds as well as pension plan managers the company is outmatched.

So, the David in this story could be Exxon, as Goliath is a powerful combination of investment funds and institutional money managers with trillions in assets and millions of investors which will force companies to respond to new realities such as climate change.